ZADAR, Croatia — After working through the night combing through the ruins of fallen buildings for survivors of a powerful 6.4 magnitude earthquake that rocked central Croatia, the search and rescue operation shifted gears on Wednesday to focus on helping tens of thousands of people left homeless.

The quake, the second to hit the area in two days and the strongest recorded in the country in 140 years, killed at least seven people and left dozens more with broken bones, concussions and other injuries.

Even as aid workers rushed to the area, strong aftershocks rocked the worst-hit town of Petrinja, as well as neighboring Sisak and Glina, about 30 miles from the capital, Zagreb.

Each time the earth shook, the few people able to return to their homes poured out into the streets, casting their eyes nervously between the sky above and the unsteady ground below.

After an early morning fog burned off, the day revealed the scale of the destruction.

Roofs had slid off houses, leaving mountains of rubble on the street. Other homes had collapsed. Video shot by local media showed how the exterior walls in one had crumbled, while a dining table inside remained almost undisturbed, laid out for a lunch that was cut short.

Some of the hardscrabble villages outside Petrinja appeared to have been razed, with few homes left standing. 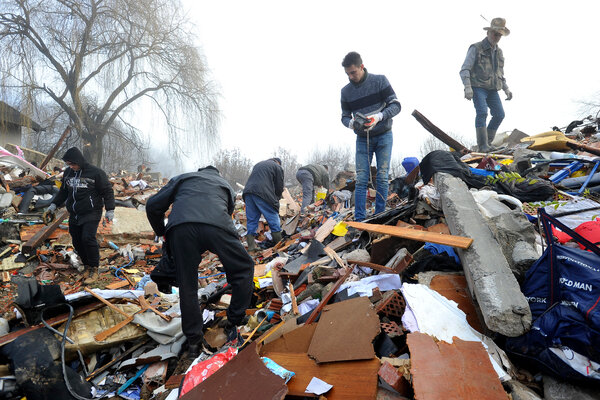 “It is not a good morning,” the mayor of Petrinja, Darinko Dumbovic, told Croatia’s state television in an early morning interview. He spoke shortly after two aftershocks — one registering 4.8 and the other 4.7 magnitude — shook loose bricks from damaged buildings.

“What hasn’t fallen off before is falling now from the ruins,” he said.

Prime Minister Andrej Plenkovic said it was clear the town was no longer fit for human habitation.

The quick reaction of many residents when the quake struck appeared to have helped keep the casualty figures from being even worse.

Already on edge because of the smaller quake that struck on Monday, many people had had a chance to think about how to react when the larger one struck.

As the earth began shaking on Tuesday, Tomislav Suknajic and his son Zeljko headed to the nearest doorway. The house began crumbling around them. When the shaking stopped, their small town of Majske Poljane was reduced to a pile of rubble. Five of the seven people who died in the quake lived in the area.

“We waited to die together under that doorway,” Mr. Suknajic told state TV. “We crouched by a wall that remained intact for as long as possible.”

The pair emerged largely unscathed and grabbed a chain saw to free a horse trapped under a collapsed barn. The horse lived.

Mr. Suknajic and his son spent the night sleeping in a car, refusing to have another roof over their heads, fearing it would crumble around them again.

The residents of Petrinja and the surrounding areas have lived through turbulent times even before this week’s disaster.

The city was one of the first to be torn apart by military conflict during the Balkan wars, overtaken by armed forces from what was then Yugoslavia in 1991. The siege eventually exploded into the full-blown conflagration that led to the disintegration of Yugoslavia.

Petrinja has been shrinking ever since.

Once one of Croatia’s largest cities, it has hemorrhaged citizens in recent years, with less than 25,000 people calling it home before the quake.

That is part of a larger demographic crisis that has led to the shrinking of Croatia’s overall population of 4.2 million as many young people head to wealthier countries with more opportunities for work. The World Bank projects the population will decline to 3.46 million by 2050. And the European Union estimates that 15 percent of working-age Croats live in other member countries.

Mr. Dumbovic, the mayor, said recovering from the quake was also a struggle for the town’s existence.

The Croatian government has allocated 120 million kunas, about $19.5 million, in aid so far, and has promised that more will come. The European Union’s crisis management chief, Janez Lenarcic, said the bloc was also preparing to help.

But the recovery efforts are complicated by the continuing battle to slow the spread of the coronavirus.

While the government moved quickly to lift a ban on travel between districts to allow aid workers and volunteers to travel to the region, it still has to contend with a virus that is surging in the country as it is in much of Europe.

The 40 Covid-19 patients hospitalized in the area were moved to Zagreb. But social distancing will be a major challenge for the tens of thousands of people forced to live in hastily arranged shelters.

Nursing home residents were evacuated to Zagreb and other nearby facilities. But some remained tied to their battered homes. Wary locals, most of them older, huddled around campfires roaring next to the ruins of their houses, keeping an eye out for looters.

There was an outpouring of support from around the country, with humanitarian aid packages pouring into the area so quickly that the Red Cross asked Croatians to stop sending provisions.

They had too many eggs and not enough propane tanks, tents and generators, the organization said. Neighboring towns reliant on agriculture also needed mobile homes or trailers so locals could stay with their livestock.

“At this moment we have to ask all those good people, donors, we have to stop a bit,” Ivana Malovic of the local Red Cross said in an interview. “This will take a very long time. You see how the city was destroyed. People will be hungry, they will have needs in five days, 15 days,” she added, but thanked donors for everything they had sent so far.

Thousands of people were being housed in temporary shelters in nearby sports arenas and army facilities but some residents refused to leave.

Dr. Marina Lokner, president of the city’s Red Cross, said that it was mostly older residents who had stayed behind.

“They came to us during the night to warm up in a tent,” she said.

The earthquake on Tuesday was the strongest to be recorded in Croatia using modern measurements, though the region has experienced powerful tremors earlier in its history.

Tomislav Fiket, a Croatian seismologist, told state TV that more aftershocks could be expected and that caution was needed in the recovery efforts.

“All these earthquakes hitting already-damaged buildings can cause greater damage or bring them down,” he said.

Joe Orovic reported from Zadar, and Marc Santora from London.

Homeless people given the Covid vaccines by council in UK first