CIRENCESTER, England — During a spring day of sun and showers in Gloucestershire in southwestern England, Mike Robinson, a restaurant owner and self-styled “hunter-gatherer,” was out counting the deer on his land. On any given morning he can see up to 40. He spotted a hind, a female deer, walking more cautiously than normal, a sign that she had company.

“Generally baby roe deer are smaller than the height of the grass,” he said. “So very often you just see the top of their heads or their ears.” Hinds had only started giving birth in recent days. “We’re going to see this colossal increase in numbers,” he said, sounding worried.

In a normal year, deer hunters and government culling programs help limit the herd, and restaurants form an important market for the venison. With the pandemic, hunting and culling stopped, the market for venison collapsed and, as a result, the deer population of Britain is exploding, decimating the plant life that many species depend on.

“Heavy browsing and grazing can impact severely on woodland plants and heath land, and salt marsh habitats,” said Martin Fowlie, a spokesman for the Royal Society for the Protection of Birds. That can lead to declines in bird populations, he added.

To avoid that, some wildlife experts now see a need for drastic action to reduce the deer herd, including through an expanded program of culling. In Britain, which prides itself as a nation of animal lovers, that might be hard for many people to accept.

For some, the answer to making a cull more acceptable is simple: “Anything shot must be eaten,” says Tim Woodward, the chief executive of the Country Food Trust, a charity that distributes game meat, and who supports the idea of a mass cull. But even if that would make a large-scale cull more palatable to the public, it would present a steep logistical challenge that some are only now thinking about ways to meet.

While deer are difficult to count, the Royal Society for the Prevention of Cruelty to Animals says the population exceeds two million, causing over 74,000 traffic accidents a year and inflicting heavy damage to crops, woodlands and marshes. 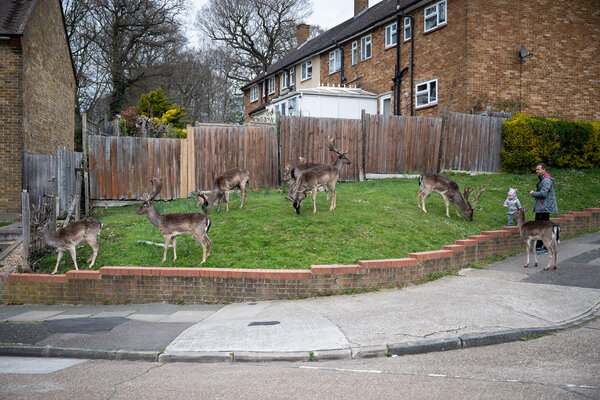 Deer are also among the challenges to Britain’s plans to reduce its carbon footprint. The government has said it hopes to increase tree planting to about 74,000 acres a year by 2025, up from about 25,000 acres a year now, to sequester carbon. Herds of voracious deer munching on unprotected saplings could undermine that effort.

Yet the idea of a rapid expansion of hunting and culling has the potential to cause upset in a country with a well-developed animal rights movement.

“We will never achieve ecological harmony through the barrel of a gun,” Elisa Allen, the director of People for the Ethical Treatment of Animals in Britain, said in an interview. “Killing them off only causes their population to rebound as lethal initiatives result in a spike in the food supply, accelerating the breeding of survivors.”

Ms. Allen says there are many ways to deal with the deer population besides culling. “If deer numbers must be reduced,” she says, “the key is to leave the deer in peace and target their food sources by trimming back low-hanging tree branches, keeping grasses cut short and shrouding saplings with corrugated plastic tubes or sleeves, deer netting or mesh.”

Advocates of an accelerated cull say that passive measures like trimming branches and erecting tall deer fences are impractical on a nationwide basis.

Even such a potential critic as Chris Packham, a noted wildlife activist, has recommended the culling of deer that destroy the dry scrub habitat that serves as a nesting ground for nightingales, whose numbers have declined sharply in recent decades.

Charles Smith-Jones of the British Deer Society, a deer welfare group, also accepts the need for what he calls “active management,” adding: “Of the active methods available, only shooting is really practical.”

Advocates of a cull broad enough to bring the population into balance say it would ultimately require eliminating as many as a million deer through the combined efforts of private landowners, licensed shooters and public bodies like Forestry England, which manages the nation’s forests, and the Department for Environment, Food and Rural Affairs.

Even if a program of that breadth could be organized, and if it proved politically possible, that would still leave the problem of what to do with all of the meat.

A major hurdle is resistance to venison, which has never been a popular menu item in the country. A cull large enough to reduce deer to manageable numbers would produce much more meat than could be consumed at current levels.

Yet even before the pandemic, nearly eight million people in Britain were struggling to get enough to eat, Parliament’s Environment, Food and Rural Affairs Committee reported. Even with the pandemic beginning to ease, food charities around the country are coping with an increase in demand.

In Britain, venison is not typically eaten at home; it has a reputation of being a treat for special occasions.

A campaign started in September 2020 and headed by the Forestry Commission to get the British public cooking venison at home has yielded some results. The meat is being stocked in more supermarkets, and some game dealers are making a business of delivering it to people’s doors.

But even as restaurants start to reopen, the supply of venison would still far outstrip demand if a cull were on the scale that advocates seek.

Advocates say some of the excess should go to the food banks that proliferated during the pandemic. City Harvest London supplied 300,000 meals in February 2020. A year later, it had provided over a million, some of them with venison.

Operating on an even larger scale is the Country Food Trust, which since its founding in 2015 has distributed over two million meals to more than 1,900 charities throughout Britain, often using cuts of meat from game dealers like Mr. Robinson and MC Kelly.

Since October, it has provided over 167,000 portions of venison Bolognese and a roughly equivalent amount of plain mincemeat. “The majority is prioritized towards children,” said Tim Woodward, the trust’s chief executive. “I would buy every bit of venison I could get my hands on now, because we have a never-ending need for it.”

Forestry England, which is part of the Forestry Commission, sells about 265 tons of venison annually — enough for 2.4 million meals — to game dealers, among them MC Kelly, who then sell it on.

As a starting point, Mr. Woodward of the Country Food Trust has been lobbying for the Forestry Commission to donate all deer carcasses to his group as a cost-effective way for the government to tackle food poverty quickly.

That would be a huge undertaking and would require major changes to distribution. But the effort is gathering momentum. One prominent supporter of the Country Food Trust is Geoffrey Clifton-Brown, a longtime member of Parliament and the chairman of the All Party Parliamentary Group for Shooting and Conservation, which includes about 400 politicians.

In an interview, Mr. Clifton-Brown acknowledged that change could be slow, as Forestry England is an autonomous public body that is used to selling the deer, even at rock-bottom prices, rather than giving it away. “It’s a whole change of psyche for them to do this.”

Prince George, Charlotte and Louis could spend first Easter in London due to COVID-19 rule

In a Transylvania Town, Bears and Humans Collide at the Dumpster