Home » Europe » As her smile showed, at the races was where the Queen was most happy

The date: Thursday June 20, 2013. The place: Ascot. Royal Ascot, to be precise. A four-year-old filly called Estimate, ridden by Ryan Moore and trained by Sir Michael Stoute, powers past ColourVision in the final furlong and holds off the late challenges of Simenon and Top Trip to land the Gold Cup in a pulsating finish. 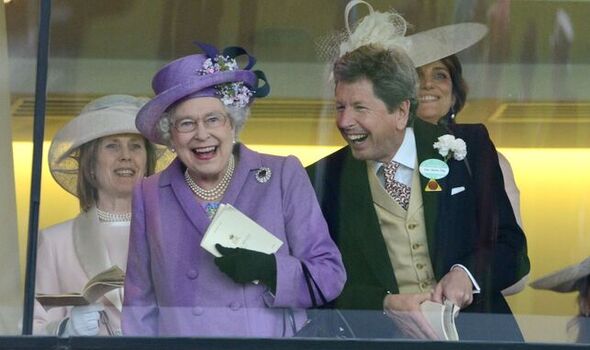 The cheers of the 62,000 crowd are off the scale and probably could be heard as far away as London. That is because this is no “ordinary” Gold Cup winner.

Estimate is owned by the Queen. The victorious horse is carrying Her Majesty’s famous, distinctive racing colours of purple body with gold braid, scarlet sleeves and a black velvet cap with a gold fringe.

It is the first time in the Gold Cup’s 207-year-old history that the flagship event of the prestigious five-day-meeting, which begins each day with a horse and open carriage Royal procession, has been won by a reigning monarch.

Estimate’s emotional win in the 60th year of her coronation was probably the crowning glory of the Queen’s lifelong love affair with the Turf, the success being all the more special in that it came at the racecourse which she owned, and at the only meeting with the Royal prefix.

Elizabeth II was besotted with horses since childhood. As a small girl “Lilibet”, as she was known, and her younger sister Margaret loved to ride their 20 wooden rocking horses in the royal nursery.

She listened with rapt attention when her grandfather King George V told her of the exploits of his racehorses.

His father Edward VII had as an owner won the Derby three times – the first reigning monarch to own a winner – and the Grand National once. So you could say the Queen, with her attachment to racing, was following in a long family tradition.

She received her first horse, a Shetland pony called Peggy, as a present from her grandfather for her third birthday and soon became an accomplished rider.

After her first exciting day at the races, at Ascot in May 1945, the then Princess Elizabeth’s interest in the sport was enhanced two years later when the Aga Khan presented her with a beautifully-bred filly called Astrakhan as a wedding gift.

In 1949, she celebrated her first winner when the chaser Monaveen, which she co-owned with her mother the then Queen, coasted home at Fontwell Park by 15 lengths.

Author Jim Beavis, in his history of Fontwell, records how afterwards Princess Elizabeth and her mother went to tea with the Duke of Norfolk at nearby Arundel Castle to see Astrakhan, who was lodging there.

The Queen Mother described National Hunt racing as, “one of the real sports that’s left to us: a bit of danger and a bit of excitement, and e the horses, which are the best thing in the world”. Her daughter loved the jumps too with its thrills and spills but her main interest as an owner and breeder came on the Flat. 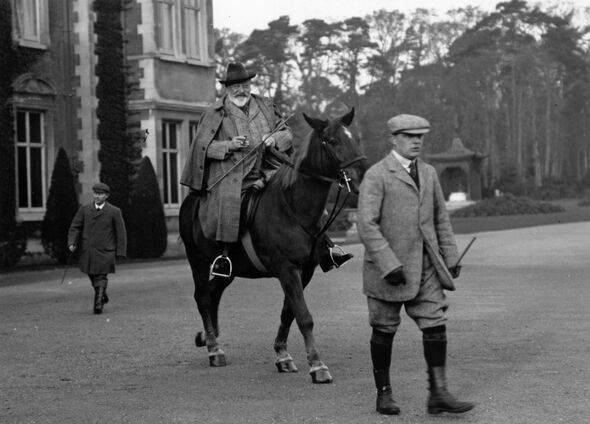 The closest she came to winning the Derby, the most famous Flat race in the world, came in 1953, the week of her Coronation, when Aureole, who had been bred by her father King George VI, lined up in the field.

A lady-in-waiting said to the Queen on the day before she was to be crowned: “You must be feeling nervous, Ma’am.” The Queen, her mind on the Derby, replied: “Of course I am but I really do think Aureole will win.”

But Aureole finished second. A year later the Queen’s horse Landau headed the field with three furlongs to go but faded in the closing stages.

In 2011, after nearly 60 years of trying to win Epsom’s Blue Riband, there were high hopes for her Derby entry Carlton House, who was sent off the warm 5-2 favourite, but the colt lost a shoe and could only finish third.

Although the Queen never won the Derby, in 1992 TV cameras showed her child-like delight when she did win the Royal party’s Derby sweepstake, snapping up the grand sum of £16.

She may have been the world’s richest woman but winning the sweep clearly meant a lot to her, like millions of others who love a successful flutter on the horses. 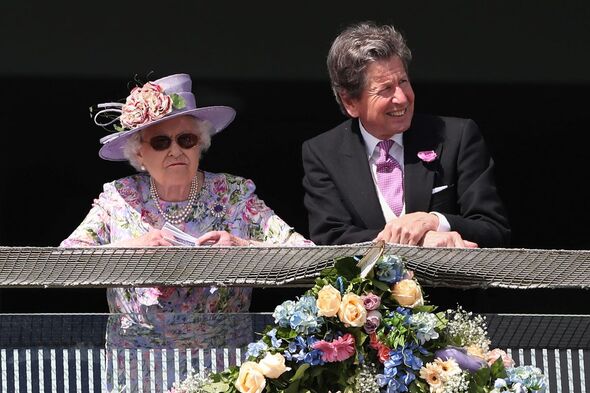 The Queen’s official position as Head of State meant she had to adopt a serious – and at times rather stern – public persona. But it “was when she was enjoying a day at the races that we saw the real Elizabeth Windsor.

Her sheer, unadulterated joy at Estimate’s Gold Cup win was there for all to witness.

Her knowledge of the sport was phenomenal. It was said that if she ever swapped her throne for the famous black chair on Mastermind, the Queen’s specialist subject would be Flat racing. The jockeys who rode for her testify to her expertise.

Gary Stevens revealed the detailed instructions Her Majesty had given him before he rode her horse Blue Print to victory at Royal Ascot. “It was like a road map,” he explained.

When she was not fulfilling official duties, the Queen liked nothing better than to unwind by watching the racing on television or reading about the sport in newspapers.

It was said the first pick from the pile of her morning papers for many years was, before its closure in 1998, The Sporting Life. Her racehorse trainers also speak of her enthusiasm. 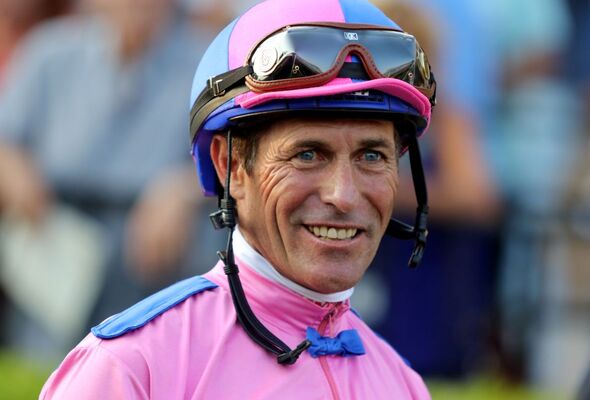 “She could have been a trainer,” said Ian Balding, who trained for the Queen for 35 years. “She is a natural with horses. If you go round stables with her she wants to look at all the horses, not just her own.

“There are times when I would advise an owner not to stand too near some horses because they could kick. In her case I don’t have to say it.”

The Queen enjoyed plenty of big race successes, particularly in the first half of her long reign. In 1957, she landed her first Classic when Carrozza won the Oaks.

A year later she won the 2000 Guineas with Pall Mall. Then in 1974 she won the 1000 Guineas with Highclere, who also won the French Oaks. One of the most memorable days was when her filly Dunfermline, ridden by Willie Carson and trained by Major Dick Hern, won the Oaks in the week of her Silver Jubilee in 1977.

For good measure, Dunfermline also won the St Leger, adding to Her Majesty’s Classic collection. The Queen was once quoted as saying: “If it were not for my Archbishop of Canterbury I should be off on my plane to Longchamp [Racecourse, in Paris] every Sunday.”

It is fair to say her passion for racing did bring criticism from certain highbrows types who felt the ruling monarch should have patronised “artier” pursuits.

But as one newspaper leader put it in 1977: “If the Queen would rather go to Ascot than peer at a lot of dirty nappies in the Institute of Contemporary Arts, what is wrong with that?”

Racing certainly benefited greatly from the Queen’s interest, as an owner and breeder.

“If the Queen loves racing then the sport can’t be as bad or peripheral as some allegedly clever people think it is. By God, she is good for us,” opined racing columnist Alastair Down.

Captain Sir Rupert Mackeson, a former amateur rider and officer in the Royal Horse Guards in the 1960s, says: “The impact of the Queen’s patronage of the sport cannot be underestimated.

“Not only was she a leading figure in international horse-racing but deep into her 90s she still loved riding and she instilled her love of horses into her children and grandchildren.”

Both Princess Anne and Prince Charles rode competitively and their mother took a keen interest in their equestrianism. In 1987 journalist Tony Stafford reported: “Among the massive crowds for Diamond Day at Ascot on Saturday, one urgent voice from the stands exhorted, “Don’t be so cool, do something!” This self-confessed plea came not from an ordinary punter, but from the Queen as she shouted home the Princess Royal in the Dresden Diamond Stakes.”

Perhaps the Queen would have been a successful lady jockey had she not been the heir to the throne. But she did take the opportunity to ride her own horses whenever she could. One of her all-time favourites was Burmese, a 1969 gift from the Royal Canadian Mounted Police. 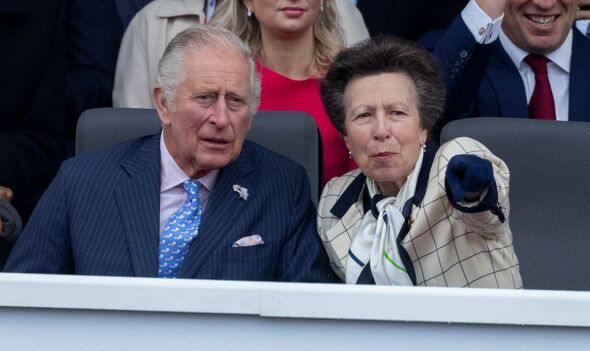 The Queen rode the jet black mare side-saddle in the annual Trooping the Colour ceremony for 18 years. In 1981 there was a dramatic incident as six blank shots were fired at the Queen from the crowd.

Burmese was startled but the Queen soon had her horse under control and the pair continued along Horse Guards Parade as if nothing had happened. The trusty Royal steed died at the ripe old age of 28 in 1990 and, like other much-loved horses owned by the Queen, was buried in Windsor Home Park.

During the first Coronavirus lockdown of 2020 the Queen, then aged 94, was pictured riding her 14-year-old fell pony Balmoral Fern in the grounds of Windsor Castle.

That year she missed attending Royal Ascot for the first time as ruling monarch due to it being held behind closed doors, but she did return for the Saturday of the reduced-crowd 2021 event.

She also attended a full-house Champions Day in October 2021 to be inducted into the British Champions Series Hall of Fame. It was a popular choice.

After Estimate’s Gold Cup win eight years earlier, there were spontaneous cries of “Hats off for Her Majesty!” from the jubilant crowd. Though among a total of more than 1,800 victories in her jockey’s racing colours of purple, gold and scarlet, it was a magic moment.

The Queen’s big smile in the Royal Box told us she right where she belonged and where she was most happy.