GAINSBOROUGH, England — The group of seven volunteers in high-visibility vests, equipped with GPS trackers and radios, gathered in the parking lot of a nature preserve on the outskirts of town.

“We’ll take the red route,” Rick Roberts said, shining his flashlight over a map of the woodland, as his breath formed a cloud in the cold, late-November air.

The group fanned out on the trails in teams for the next hour, the beams of their high-power flashlights crisscrossing through the trees outside Gainsborough, a once bustling market town nestled along the winding River Trent in Lincolnshire, in the East Midlands of England. They were there as part of Night Watch, a suicide-prevention initiative started just a few weeks earlier to monitor known suicide hot spots in the area, and they were looking for people in crisis.

This night was a good one: They found no one.

But the past few weeks have been busy for the Bearded Fishermen, the mental health charity behind the patrol project, and its co-founders, Mr. Roberts and Mick Leyland. With England just emerging from a second lockdown, they have seen a measurable uptick in calls for support and an increasing need for their crisis services as the community grapples with the fallout of the coronavirus pandemic. 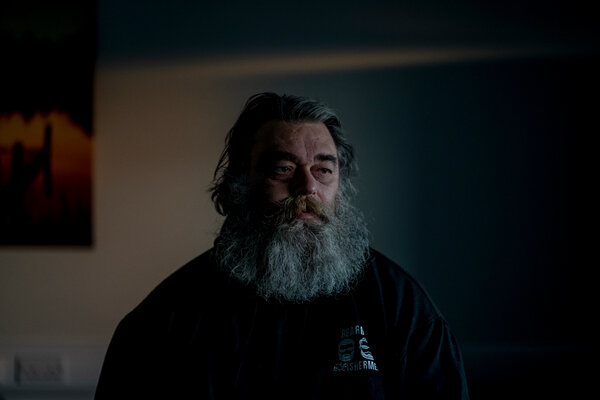 “The cold and wet weather, long nights, it does affect a lot of people,” Mr. Leyland said. “And being on lockdown as well, it’s even worse.” In one recent week alone, they had responded to a number of crisis calls, including some from people threatening to take their own lives.

With the coronavirus pandemic devastating Britain and two national lockdowns leaving many feeling isolated, experts say there are rising concerns about the mental health and well-being of people across the country. Research has shown a rise in reports of loneliness, a particular concern for young people, difficulties for those with pre-existing mental health issues and an increase in reports of suicidal ideation.

Though there is no recorded uptick in the national suicide rate yet, the risk of suicide among middle-age men remains concerning in Britain, where for decades the group has made up the highest number of suicide deaths.

The impact of the pandemic and its knock-on effects — lockdowns, an economic downturn and social isolation — on mental health have been well documented around the world. And in Britain, which is simultaneously grappling with the highest number of Covid-19 deaths in Europe and a deep recession, health experts worry that the impact could be felt for years to come.

Some neighborhoods in Gainsborough are considered the most deprived in Lincolnshire.

David, 22, who asked that his last name be omitted to protect his privacy, lives in the town and has struggled with depression and alcohol abuse for years.

“I was brought up by my granddad, so I was brought up to think, it doesn’t matter what’s going on, you have to just be strong,” he said. For David, the lockdown has posed new challenges. With his living situation growing more unstable and job opportunities dwindling, the stresses have added up.

“The pandemic has definitely made things a little bit more difficult, because there’s not as many services to access support from face-to-face,” he said, adding that the lack of human connection had been hard. He said that the Bearded Fishermen’s support provided a lifeline, but some days were better than others.

In some ways, Mr. Leyland said, the town feels “forgotten,” often overlooked in funding, even as “ homeless, jobless and low-income residents see their mental health adversely affected by the pandemic.

“There are a lot of people here who have been out of work for a while, who desperately want work,” Mr. Leyland said. “They get to that point where they think, ‘I’m better off not being here.’”

Mr. Leyland and Mr. Roberts officially registered the Bearded Fishermen charity — its name is a nod to their shared love of fishing and to the bushy facial hair they both sport — as the pandemic was just beginning in March. When England entered a second national lockdown, they began the Night Watch patrols.

The pair’s own mental health struggles and path to solace serve as powerful testimony. Both have survived suicide attempts. After being homeless for a time, Mr. Roberts moved to Gainsborough, and the two became friends during weekly fishing outings with a group of other men.

“We both suffer from depression and anxiety, and so fishing was a release for us,” Mr. Roberts said. “We used to sit there just chatting about things that we won’t chat to anyone else about.”

They thought others, particularly men who struggle to open up, could benefit from similar support. Late last year, they began a weekly community group, where men could “hash out their problems” over cups of tea at a local community center, Mr. Leyland said.

When the pandemic made gatherings impossible, they moved their meetings online. Then they set up the call center this summer, providing phone support 24/7.

“If someone doesn’t want to ring up because they’ve got it in their head that this is what they are doing,” Mr. Leyland said of people considering suicide, the patrols were an opportunity to intervene. The group works with emergency responders and the community to identify hot spots, and also helps search for missing people when their families have nowhere else to turn.

The charity has also found itself increasingly responding to mental health calls at residents’ houses. Last week, workers were called out to the home of a 28-year-old man whose wife said he was threatening to end his life. He had already written a suicide note. They spoke with him before calling the ambulance and police services, and referred him for counseling.

The situation in the Gainsborough area reflects the larger mental health strain across Britain. A report published by the British Journal of Psychiatry in October found an increase in reports of suicidal ideation during the pandemic. Young people, individuals from more socially disadvantaged backgrounds and those with pre-existing mental health problems reported worsening conditions during the first national lockdown in the spring.

Mette Isaksen, a senior researcher and evidence manager at Samaritans, a British mental health charity that was a partner in the research, said that while the study revealed worrying trends, it did not necessarily mean suicides would rise.

“It’s just so important that people know they can get help,” she said. “Suicide is not inevitable.”

The Mental Health Foundation, which has been carrying out a nationwide study of the pandemic’s impact on mental health in Britain, found that reports of loneliness spiked during the first lockdown. The research also noted that, while some negative emotions reported early on — like anxiety, stress and panic — had dropped, feelings of loneliness and isolation had persisted.

Dr. Antonis Kousoulis, the foundation’s research director for England and Wales, said certain groups were of particular concern, including young people, who reported feelings of hopelessness at a markedly higher rate than the rest of population. Many with pre-existing mental health issues have also seen their conditions worsen, he added.

For Mr. Leyland and Mr. Roberts, the concerns for young people are also front of mind after a series of suicides and attempts in the nearby town of Winterton in recent weeks. With youth clubs closed and activities halted, they said many felt hopeless.

“It’s going to feel like the year that wasn’t,” Mr. Leyland said.

In response, volunteers with the Bearded Fishermen met with a group of teenagers at a makeshift memorial in Winterton for a young man who recently died by suicide, to offer their support.

“You’ve got a whole park fence just covered in flowers,” Mr. Leyland said of the tribute, his voice thick with emotion. He still feels a deep sense of regret over the young man’s death. “It’s like, maybe I could have been here two weeks earlier. But no one knew.”

If you are having thoughts of suicide, call the National Suicide Prevention Lifeline at 1-800-273-8255 (TALK). You can find a list of additional resources at SpeakingOfSuicide.com/resources or, if you’re in Britain, at nhs.uk/conditions/suicide.