Home » Europe » As the Amazon Burns, Europe Leads the Charge on Climate

PARIS — As the Amazon burned and the world faced an ecological disaster, President Emmanuel Macron of France bluntly criticized Brazil’s leader this week and threatened to kill a major trade deal between Europe and Brazil.

President Trump, on the other hand, posted a Tweet only Friday evening, saying that the United States was ready to help contain the fires, but adding that “future trade prospects” between the United States and Brazil “are very exciting.”

The contrast highlighted the gap in leadership on issues affecting the global climate. As the Trump administration denies established climate science and has abandoned an international accord intended to fight global warming, European leaders have energetically stepped in to take up the mantle of leadership.

“There is a European vision of the world, and this vision is asserting itself more and more — that the European Union has to be a green superpower,” said Pascal Canfin, an ally of Mr. Macron, who is also member of the European Parliament and chairman of its environment committee.

By week’s end, the global condemnation led by Mr. Macron appeared to have chastened President Jair Bolsonaro of Brazil, a far-right populist and climate change skeptic.

In a televised address Friday night, he reversed himself, announcing that he would send the military to combat the fires and adding in an unusually conciliatory tone, “Protecting the rain forest is our duty.”

Mr. Bolsonaro’s announcement yielded a victory for Europe as Mr. Macron prepared to host the Group of 7 leaders at a weekend meeting in Biarritz, a resort town in southern France.

But the summit meeting also underlined the limits of Europe’s engagement on climate: Mr. Trump had used his first Group of 7 meeting, in 2017, to snub the Paris climate accord before quickly announcing a withdrawal. And China — the world’s other indispensable player on climate and Brazil’s biggest trading partner — is not a member of the group. 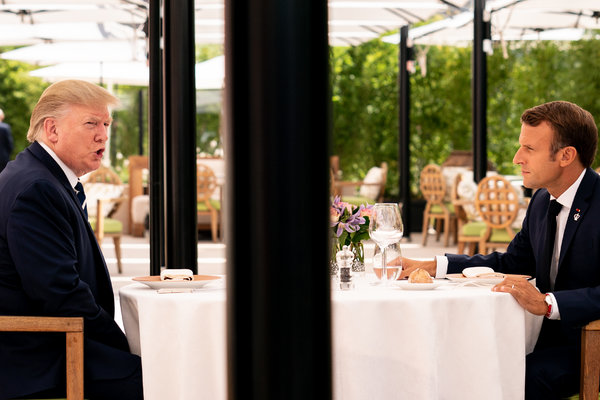 Mr. Macron’s criticism of Brazil was followed up by Chancellor Angela Merkel of Germany, who said forcefully that the Amazon fires would be a central issue during the summit.

“In a very special way, we are galvanized by the terrible fires in the Amazon,” Ms. Merkel said. The goal at the summit, she added, is “to send a clear message that everything must be done to stop the burning of the rain forest.”

But given Mr. Trump’s position on climate, and the absence of China as well as Russia, the talks are not likely to lead to significant change, said Jean Jouzel, a leading French climate expert.

“The international scene now lacks dynamism in the fight against global warming,” said Mr. Jouzel, who was vice chairman of the Intergovernmental Panel on Climate Change in 2007 when it won the Nobel Prize. “To effectively combat global warming, all countries must look in the same direction.”

Indeed, despite Mr. Bolsonaro’s change in tone on Friday, it is far from clear whether he will reconsider any of the policies that, experts say, have contributed to the rapid pace of deforestation since he took office in January.

During his short tenure, his business-friendly policies have led to widespread destruction of the Amazon’s protected areas by miners, loggers and farmers — reversing his country’s success over the previous two decades in slowing the deforestation rate.

During his presidential campaign, Mr. Bolsonaro had even threatened to pull his country out of the Paris climate accord, following in the footsteps of Mr. Trump, with whom he has bonded, especially during a visit to the White House in March.

Once a model for conservation and efforts to fight climate change, Brazil quickly became a target for environmental groups and European governments.

Earlier this month, Germany and Norway suspended payments to Brazil’s Amazon fund — a conservation program that had been central to curbing deforestation — after the Bolsonaro government weakened its leadership. Mr. Bolsonaro reacted angrily, saying, “Isn’t Norway that country that kills whales up there in the North Pole? Take that money and help Angela Merkel reforest Germany.”

In June, after 20 years of negotiations, the European Union and the South American nations agreed on a deal that would, according to Brazil’s own estimates, bolster the country’s economy by $88 billion over the next 15 years. The agreement, however, still needs to be ratified by the respective governments.

Initially, Mr. Bolsonaro said the Amazon fires were an internal issue and dismissed the idea of discussing the Amazon at the Group of 7 meeting as “colonialist mind-set that is unacceptable in the 21st century.” Without offering evidence, his administration also accused private environmental groups of starting the fires to embarrass him.

But pressure from Europe finally appeared to bear fruit on Friday as France threatened to block the South American trade deal and calls to boycott Brazilian products rose globally. The moves zeroed in on a sensitive spot for Brazil’s pro-business leader: the country’s fragile economy.

In unusually harsh language, France issued a statement saying that based on Mr. Bolsonaro’s stance on the Amazon fires, Mr. Macron “can only conclude that President Bolsonaro lied to him” during a previous meeting about his commitment to the climate.

Germany — as the biggest European winner in trade deals worldwide — has traditionally hesitated to use the European Union’s economic leverage to press a climate agenda. While Ms. Merkel appeared to fully back her French counterpart, a spokesman for the chancellor said that Germany did not believe that killing the trade deal was the way forward in resolving the crisis in the Amazon.

“France has been the most vocal in promoting it, and it’s gaining ground across Europe, though all countries are still not on the same line,” said Mr. Canfin, the European parliamentarian who also served as the head of the World Wildlife Fund in France.

Others were more skeptical, saying that political leaders were simply reacting to voters’ growing interest in climate issues — as evidenced by the Green Party’s broad gains across the Continent in May’s European Parliament elections.

Esther Benbassa, a Green Party senator representing Paris and a fierce opponent of the South American trade deal, said Mr. Macron had supported the pact until Friday even though Mr. Bolsonaro’s views and policies on the Amazon had long been clear.

“Now, because of growing opposition, Mr. Macron is just reversing course,” Ms. Benbassa said. “Because of his neoliberal views, he can’t really be for the environment.”

Teen left blind and deaf after living off crisps, chips and white bread