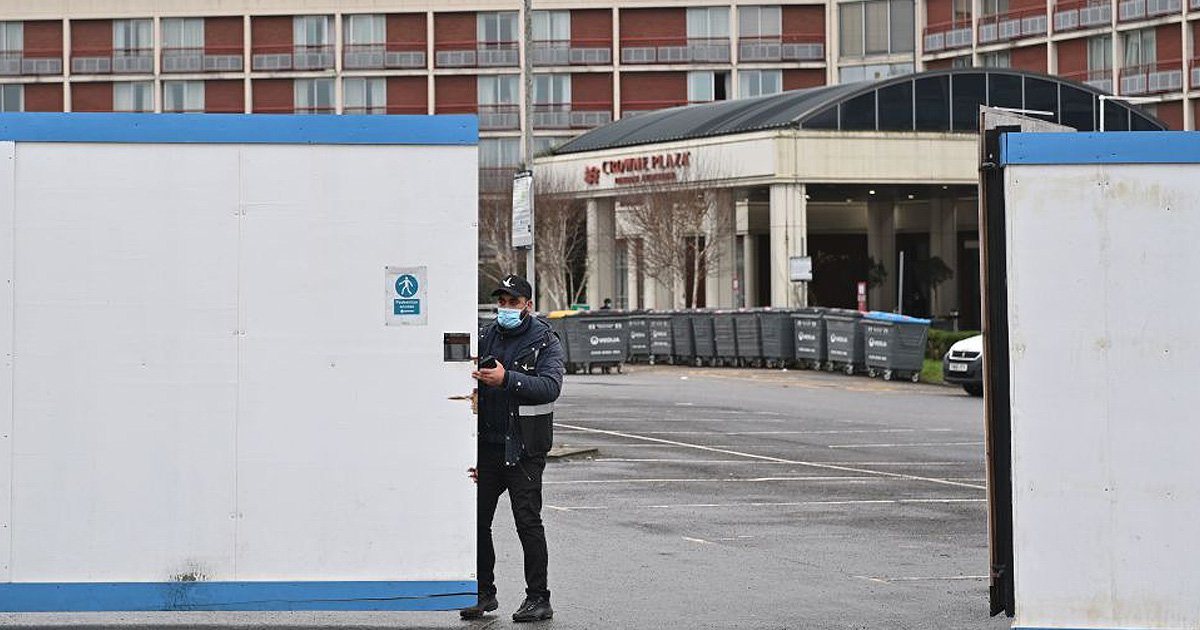 Police are investigating after a young Sudanese asylum seeker was found dead in a hotel near Heathrow Airport.

The man, believed to be 24, was found dead just before 1am on Sunday at the Crowne Plaza, West Drayton.

The hotel is used by the Home Office to accommodate asylum seekers and around 400 people are currently housed there.

A crime scene is in place while the circumstances of the man’s death are investigated.

Police said the incident is not being treated as suspicious, with the cause of his death currently unexplained.

According to the Guardian, the man had crossed the Channel from Calais, where he had lived under a bridge for several months.

He arrived in the UK four months ago and was being accommodated in the hotel while the Home Office reviewed his request to seek asylum, it is understood.

Fellow asylum seekers staged a protest at the hotel hours after the man’s body was discovered, holding signs saying ‘refugee lives matter’ and ‘he is neglected to death’.

It comes after the High Court ordered the government to move a torture and trafficking victim out of the site, which is surrounded by an 8ft wall and was described as ‘prison-like’.

Clare Moseley, founder of the charity Care4Calais, paid tribute to the man, who has not been publicly identified yet.

She said: ‘He was friends with our volunteers in both Calais and the UK. He was cheerful and jokey under the most difficult circumstances.

‘Having survived unknown horrors in his home country and a gruelling journey to get here in search of safety we are devastated that his life was cut short here in the UK.’

Maddie Harris, founder of Humans for Rights Network, said: ‘We stand in solidarity with this man’s family and call for an immediate and transparent investigation into his death.’

Twenty-nine asylum seekers died in Home Office accommodation last year – five times as many as those who lost their lives making the perilous journey across the Channel in small boats over the same period.

A Home Office spokesperson said: ‘We are truly saddened to hear of the death of an individual in asylum accommodation. The health and wellbeing of asylum seekers will always be our priority.

‘We are working closely with a range of organisations to ensure immediate support and assistance is provided to people living in the accommodation who have been affected by this tragic death and await further information from the Metropolitan police as to the findings of their ongoing investigation.’

A Metropolitan police spokesperson said: ‘Shortly before 1am on Sunday, 18 July police were notified by the London ambulance service about reports of a person deceased at an address on Stockley Road, West Drayton. Officers and paramedics attended and a man in his 20s was pronounced dead at the scene. The man’s death is not being treated as suspicious and steps are being taken to inform his next of kin.’

Are you affected by the issues raised in this story? Email [email protected]

The Home Office has come under increased criticism for conditions asylum seekers are being housed in.

In June, the High Court ruled housing migrants in Napier Barracks in Kent was unlawful due to Covid-19 spread and overcrowding, a lack of ventilation, as well as the ‘detention-like’ setting for the men, who were not being detained.

The Home Office faced renewed calls to shut the ‘squalid’ site in the aftermath of the ruling, but instead insisted ‘significant improvements’ have been made.

Charities have also previously criticised food given to asylum seekers, sharing pictures of what they described as ‘unidentifiable mush’ and  ‘congealed pasta’.