Home » Europe » At Trial, Jewish Victims of 2015 Paris Attack Ask: Why the Hatred?

PARIS — It was a Friday afternoon, time for last-minute Shabbat shopping, and the Hyper Cacher — a kosher supermarket on the eastern edge of Paris — was busy.

Yohan Cohen, 20, an employee, was working in the aisles. Philippe Braham, 45, was running errands from a list made by his wife. Yoav Hattab, 21, was looking for a bottle of wine. And François-Michel Saada, 63, was about to drop in for some bread.

They were killed by Amedy Coulibaly, a heavily armed Islamist extremist who took 17 other people hostage in the supermarket and claimed he had carried out the attack in the name of the Islamic State.

“You are the two things I hate the most in the world,” Mr. Coulibaly told the hostages after bursting in, according to witnesses. “You are Jewish and French.”

More than five years later, at a courthouse in northern Paris last week, survivors and families of the victims offered heart-wrenching testimony about the attack, which hit France just days after two brothers who had coordinated with Mr. Coulibaly massacred cartoonists and journalists at the offices of the satirical weekly newspaper Charlie Hebdo.

On Friday, two people were stabbed by a man with a knife near Charlie Hebdo’s former building. While the government has not stated publicly what motivated the suspect, an 18-year-old Pakistani, a French judicial official said Saturday that the man had blamed Charlie Hebdo and its publication of cartoons mocking the Prophet Muhammad. The newspaper moved to highly secured offices elsewhere after the earlier attack, but the stabbing occurred by a mural paying tribute to the victims.

Tensions have resurfaced lately, with more than a dozen people on trial in the 2015 violence, many facing charges of aiding Mr. Coulibaly, who was killed after security forces stormed the grocery.

Much like the survivors of the 2015 rampage at Charlie Hebdo, which the trial focused on earlier this month, the witnesses this past week told a breathless courtroom about their memories of the terrifying assault and how it left their personal lives in tatters.

But Charlie Hebdo was targeted specifically over its printing of the satirical cartoons, and its staff members were wearily accustomed to menacing threats. Last week’s witnesses were grappling with a very different question: Why us? 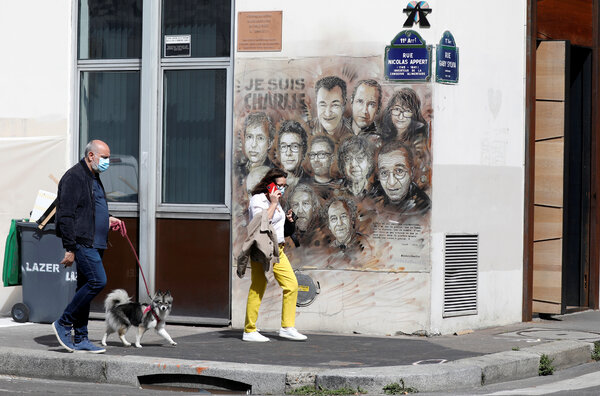 “Why the gratuitous malice?” Eric Cohen, Mr. Cohen’s father, asked the court. “Why this hatred of the Jew? I will never understand it.”

The January 2015 attacks came nearly three years after a gunman killed seven people, including three children and a rabbi, at a Jewish school in the southern city of Toulouse, and it immediately heightened fears within France’s Jewish community.

New episodes since then include the murder of a Holocaust survivor in her own apartment and the defacing of Jewish tombstones in the city of Alsace. Those have done little to assuage the concerns of French Jews who say they feel France is no longer safe for them, especially with the rise of Islamist-fueled anti-Semitism over the past decade.

Francis Kalifat, president of the Representative Council of Jewish Institutions of France, told the court last week that because of the attacks, “no Jew in France can go to the synagogue or drop off their children at school without thinking that they are a target.”

“This trial must also be the trial of an anti-Semitism that kills,” he said.

Several of the former hostages or their family members did not testify, still fearful for their lives or unwilling to recount their trauma. Some now live in the United States or Israel, where all four of Mr. Coulibaly’s victims are buried.

Noémie, a hostage who testified in court but did not want her last name used out of fear for her safety, recalled hiding in a cold-storage room with five other people and a 10-month-old whom they kept busy with keys and pieces of paper to prevent the baby from crying.

Before the attack, she was an intensive care nurse. Afterward, she could no longer stand the sight of blood. And she said she was too scared to display her name on a badge for fear someone would recognize it as Jewish, so she did not return to hospital work.

Most of the 14 people on trial in Paris, three of them in absentia, are charged with participation in a terrorist conspiracy, while a few face the more serious charge of direct complicity in the crimes. They are accused of providing varying degrees of logistical aid to the January 2015 attackers, mainly Mr. Coulibaly.

Some of the accused are former prison mates or childhood friends of his. But none are accused of being present at the scenes of the crimes, and all have denied any knowledge of a terrorist plot.

The threat of terrorism looms over the trial, which started this month and is expected to run until November.

Al Qaeda issued new threats against Charlie Hebdo after the start of the proceedings, following the newspaper’s decision to defiantly reprint cartoons of the Prophet Muhammad.

On Wednesday, after the head of human resources at Charlie Hebdo revealed she had been forced to move recently because of threats, more than 100 French news outlets signed an open letter backing Charlie Hebdo and expressing support for freedom of expression.

But for most of the week, the court was captivated by claustrophobic accounts of Mr. Coulibaly’s nearly five-hour hostage-taking and of the chilling anti-Semitism that motivated it.

Zarie Sibony, 28, who at the time was a cashier at the supermarket, gave one of the most vivid accounts in her court appearance. She recounted that she was scanning a pack of frozen chicken when a shot startled her.

Mr. Cohen, another employee, was hit, and Ms. Sibony dropped to the floor. She heard heavy footsteps, and a man’s voice asking someone his name before shooting the person dead. She would later learn that it was Mr. Braham, the shopper running errands for his wife.

Thinking the store was being robbed, she offered the contents of her cash register. But Mr. Coulibaly just laughed.

“‘You think I came here for money?’” Ms. Sibony recalled him saying. He was after Jews.

Ms. Sibony, who trained as a nurse after the attack and now lives in Israel, told the court that when she lowered the store’s metal shutter on the assailant’s orders, “I said to myself that I was burying us alive.”

When Mr. Saada rushed in, thinking he had made it just before closing time to buy bread, Ms. Sibony urged him to leave, and then he turned around and Mr. Coulibaly shot him in the back. And when Mr. Hattab — the customer who came in for a bottle of wine — tried to fire at Mr. Coulibaly with an assault rifle that was left on a pallet of flour bags, Ms. Sibony said she watched with horror as Mr. Coulibaly killed him with a bullet to the head.

Some hostages, helped by Lassana Bathily, a Muslim employee from Mali who was praised as a hero and later became a French citizen, hid in the basement. Those who remained upstairs were told by Mr. Coulibaly to sit in the aisles and to give their names, ages, jobs — and religions.

Almost all were Jewish. One 3-year-old boy, who had witnessed the whole attack, started vomiting.

The attack ended when the police stormed in and killed Mr. Coulibaly.

“The only motive for these crimes is the origin, real or presumed, of these people; their Judaism,” Galina Elbaz, a lawyer representing the International League Against Racism and Anti-Semitism, said at the trial.

“It’s the conspiracy-minded idea that originated with the far right, the idea that Jews have a grip on power,” she said.

Some lawyers for the former hostages have complained that the prosecution has not done enough to convey the extent of Mr. Coulibaly’s anti-Semitic motives. His frightening arsenal — two handguns, two assault rifles and enough explosives to bring the building down — show that he never intended to let any hostages out alive, they say.

One of the remaining mysteries about the events in 2015, which was raised by some at the trial, was the question of whether Mr. Coulibaly had intended to carry out another massacre in a southern suburb of Paris on the day before the hostage-taking but was diverted when he came across Clarissa Jean-Philippe, a 26-year-old police officer.

Ms. Jean-Philippe was killed by Mr. Coulibaly as she was inspecting a minor car accident shortly after 8 a.m., right when classes were starting at a Jewish school that was less than 1,000 feet away and that may have been his real target.