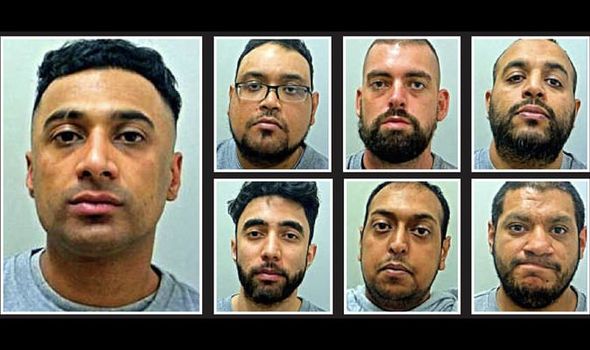 Preston Crown Court heard a feud between two tyre firms led boss Feroz Suleman, 40, to order his rival’s assassination ‑ but Aya was shot by mistake. As Suleman and his six accomplices were jailed for at least 216 years, Aya’s grieving parents called her a “role model”.

Shattered father Ismail Hachem said he once told his daughter she could one day be Prime Minister, and could help others by leading the country.

In statements read out to the judge, Aya’s mother said: “We came to England for a safer and more secure life.

“Aya’s dream was to help victims and the oppressed. We all dreamed of her graduation day at Salford University.

“She had completed her first year and sat on the board of The Children’s Society, being appointed as one of the trustees.

“She was even involved in an event hosted by an MP on the effects of cyber-bullying on young people.”

Mr Hachem said he had fled violence in Lebanon, coming to the UK in 2010. His family joined him in the UK the following year.

They were moved around the country before they finally settled in Blackburn, where they lived a quiet and peaceful life as Aya and her siblings flourished.

Mr Hachem said his daughter was “a shining star in our lives”. He said: “Aya was destined to do well in life. I once told her she would be the Prime Minister and I believed she would be. So did she.

“Not only was she our daughter but she was a sister and a role model. She loved children and would do so much for other people.

“The day that Aya was murdered is a day that they didn’t just kill Aya, they killed her whole family.

“All our hopes and dreams we had are gone. We will never see her graduate, get married and have a family of her own. Without Aya we have no life.”

Aya’s mother added: “I sent her to buy groceries. How can I live with myself and the guilt I feel?

“Not knowing that day I would never see her beautiful smile or hear her warm laughter ever again.

“They have taken a piece of my soul and killed my dreams and crushed them into pieces.”

Judge Mr Justice Turner told Suleman he was “the driving force behind the whole deadly enterprise” as he caged him for a minimum of 34 years.

The feud between the two businesses started in 2019 when Quickshine Tyres, which previously only washed cars, began selling tyres next door to RI Tyres.

The bitter dispute escalated and Suleman hatched a plot to kill Pachah Khan, the proprietor of Quickshine.

Gunman Zamir Raja, 33, who agreed to carrying out the shooting for £1,500, was also sentenced to life with a minimum of 34 years.

Manzoor was given a minimum 27 years; Hussain 32 years; both Satia brothers 28 years and Ennis 33 years.

The court heard Suleman was previously jailed in 2001 for causing the death of a man by dangerous driving.

Judy Chapman, 26, who drove the gunman from Bolton, was convicted of manslaughter and will be sentenced on October 1.

Royal POLL: Should Meghan Markle and Harry drop titles if they want to move into showbiz?