Three women and a baby in a pram narrowly avoided death after an SUV fell from a parking garage – landing just feet away from them.

CCTV footage shows the car suddenly driving through the wall and landing nose-down directly behind the group in Balneario Camboriu, Brazil.

Debris was left covering the spot where the women were standing, whilst the driver of the car could be seen staggering out of the vehicle.

Passers-by rushed to help the women, with one, aged 23, taken to hospital by air ambulance.

She sustained head trauma and fractures to her pelvis and chest, and remains in a serious condition.

The other two women and baby did not require medical attention, The local fire department reported.

The driver, who was also taken to hospital, claims the car had a ‘mechanical breakdown’.

He will be arrested for leaving the scene of the accident without helping the victims, Military Police said. 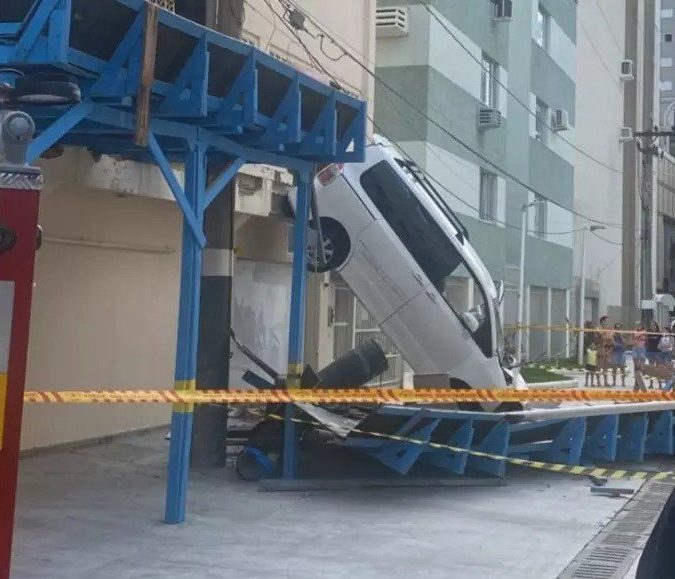 They added the car belonged to a Paraguyan family visiting the area.

The driver is said to be the son of the 69-year-old owner of the vehicle, which is registered in Paraguay.

Military Police Sergeant Denicio Francisco Rosa said: ‘He claims that the car had a mechanical breakdown.

‘As a result, he ended up losing control of the car and went through the wall.’

After the driver was breathalysed at the hospital, it was found he was under the legal alcohol limit.