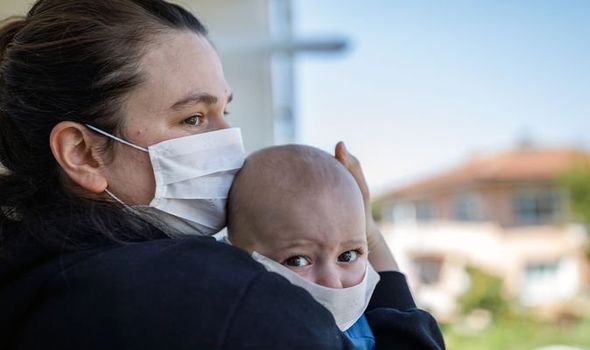 While more than £3billion has been assigned to children aged two to 18, no extra funding has been given to babies, says the Parent-Infant Foundation. This “baby blind-spot” has created “a massive cohort of invisible children”, it says, and has left child health workers stretched and exhausted.

Some health visitor services could be axed altogether as funds dwindle.

Its report, Working for Babies, is released today and is based on discussions with 138 managers and leaders in early years help across 35 local authorities.

It discovered many services were either not operating or only partially open despite “increased and urgent need”.

Previous research by the foundation found only eight percent of local leaders thought the Government had done enough to ensure babies under two received the support they needed during lockdown.

The report concluded the lack of services “removed key protections, just at the moment they were most needed”.

The report followed Department for Education research that showed an alarming rise in infant deaths and serious injuries linked to abuse or neglect since the first lockdown.

A recent report from the department showed the number of serious incidents of harm involving children rose by almost a fifth to 536 between April 2020 and March 2021. More than a third of these — 36 percent — related to babies aged under one, and 42 percent were linked to the deaths of children.

The Parent-Infant Foundation says while a toxic mix of poverty, isolation and mental illness led to an alarming rise in the number of infants being harmed, the easing of lockdown has not led to a corresponding rise in vital support for babies and parents or carers.

Under Government guidance, parents or carers should have at least five health visitor appointments before a baby is two.

But the report found that in many parts of the country these are not being offered or contact is being made via a letter or text message. In some areas there are even plans to axe some health visiting services altogether due to lack of council funds.

Sally Hogg, head of policy at the Parent-Infant Foundation, said the lack of services meant many babies were at risk of missing crucial development opportunities “at one end of the spectrum” and “at the other end of the spectrum many others were also risking neglect, and potentially deadly or serious harm for which there should be a national outcry”.

She said: “The first two-and-a-half years is crucial to a child’s development into adulthood and without services many children are likely to struggle.

“We know babies depend on adults being able to interact. There has been over £3.1billion allocated for children aged two to 18 years but no money to improve services for babies between nought to two, when babies are completely susceptible to their environment.

“We believe this baby blind-spot will lead to a significant rise in social, emotional and development problems which have been allowed to occur because of the lack of services during the pandemic, and these problems are still being left and worsening.

“We could do lots to help get services back on track but this opportunity is being missed and children are suffering now.”

She added: “Our report has found a massive cohort of invisible children at a time when there is more pressure and stress on families.

“Services and support groups would normally pick this up but for many people, these are no longer available and we have found many new parents are missing face to face contact.

“These children are invisible and the risk to them has all but disappeared to the nation. Proper funding for health visiting, early years and family support in communities is now urgently needed to prevent families reaching the point where they need social care and to identify those who need additional support from the child protection system.”

A Department for Education spokeswoman said: “The increase in serious incident notifications is of concern and that is why we are investing significant funding to improve safeguarding for infants and adolescents, to support councils with high demand for children’s social care, and to improve outcomes for vulnerable children.”