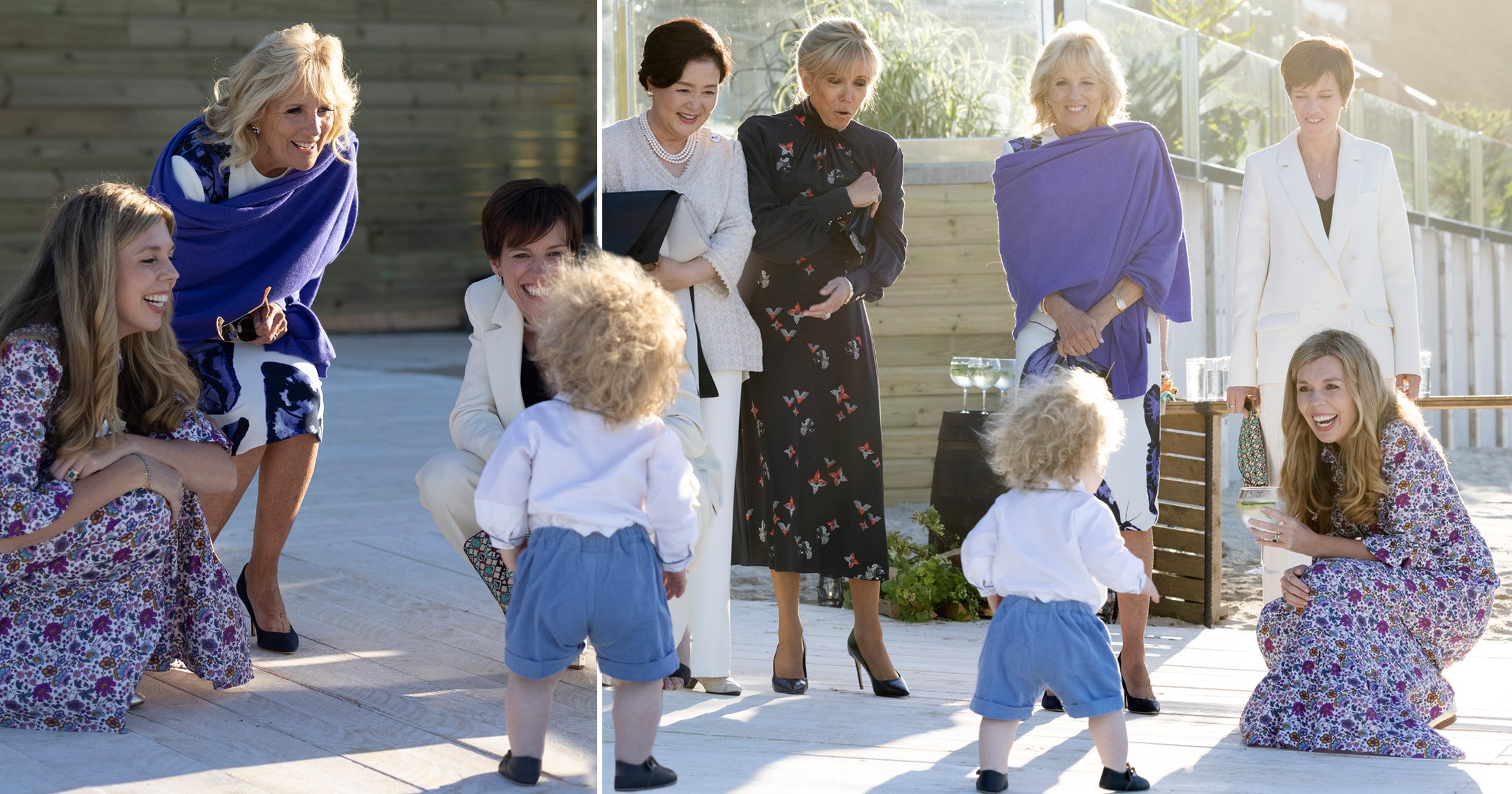 Boris and Carrie Jonson’s son Wilfred may have outdone the Red Arrows with a simple toddle towards his mum at a beach barbecue.

The one-year-old was pictured waddling to Carrie as many others, including US First Lady Jill Biden, beamed at him as he was finally allowed to join his parents for dinner.

But after this imaginably difficult topic, Britain made sure to pull out all its stops with an incredible Red Arrow performance.

The distinctive Hawk fast jets set off from Carbis Bay at around 8pm before they were visible in different areas around Cornwall at different times.

The aerobatic team wowed locals and visitors alike as the planes looped around into their famous diamond shape several times before splitting off.

Bus driver Wayne Flynn, 55, who is from Leeds but in Cornwall for a holiday, said: ‘It’s the first time I’ve seen it real life.

‘It’s really good – I hope it’s pollution free though because of the G7.

‘It’s certainly attracted a few people round here. I’ve always known about it as a kid. I’ve seen it on TV, but not for real.

‘I’d go and see it again now if I could, it’s really good. I’d recommend it to people.’

The Red Arrow team is a faction of the Royal Air Force, formed in 1964, designed to be ambassadors for Britain.

Red arrow pilots have to have done at least 1,500 hours of flying, they must have completed one or more frontline tours and must be considered to be exceptional in their flying roles.

Tomorrow will provide another opportunity for people to see the Red Arrows’ flying, as the jets return to their base in Scampton.

Anyone around Cornwall should keep a lookout from about 1pm to 2pm.

Britain has really gone all out for the first gathering of the G7 since the start of the coronavirus pandemic, including a dinner with the Queen at the Eden Project last night.

Jets were not the only theatrics on offer as the First Ladies of the world’s richest countries came together to watch a school play about plastic pollution in the ocean.

Climate change has been a dominating theme this year as Extinction Rebellion consistently demonstrates and protests over the leaders’ ‘failure to respect the global climate commitments they made in Paris in 2015’.

Although the G7 summit has been loaded with social events, Boris Johnson proved he was still very much working and paying attention to the pandemic when he hinted from a picturesque beach that the UK’s upcoming ‘freedom day’, on June 21, may be delayed because of the spread of the Indian variant.

He told Sky News: ‘It’s clear that the Indian variant is more transmissible and it’s also true that the cases are going up, and that the levels of hospitalisation are going up.

‘Now, we don’t know exactly to what extent that is going to feed through into extra mortality, but clearly it’s a matter of serious, serious concern.’