The EU’s chief negotiator insisted the bloc would consider alternatives to the backstop including “technology, drones, invisible borders” but that they don’t currently exist. But he declared that Mrs May’s successor in Number 10 would have to first sign up to the hated Irish backstop, which was at the heart of MPs’ rejections in Westminster. Mr Barnier’s take-it-or-leave-it offer comes amid a wave of pledges from Tory leadership contenders to return to Brussels in order to renegotiate the 585-page draft EU withdrawal agreement.

In a desperate attempt to break the Brexit deadlock, Mr Barnier said: “The backstop is insurance, in case we do not find a solution.

“It could be what we call alternative arrangements: technology, drones, invisible controls.

This has emerged as the EU’s chief Brexit negotiator’s most positive tilt towards the so-called “alternative arrangements” to the backstop favoured by Tory Brexiteers. 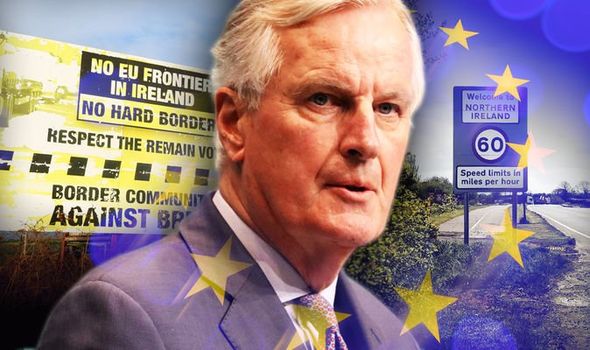 Mr Barnier, a former French agriculture minister, said the development of new technologies to implement “invisible controls” will be required to monitor the movements of livestock and lorries carrying farm products.

In a warning shot to the next British prime minister, he maintained that the EU would only consider the adventurous options if they support the current divorce deal.

“If the UK wants to leave in an orderly manner this treaty is the only option,” he said in an American interview with The New York Review of Books.

“But if the choice is still to leave the EU in an orderly manner this treaty is the only option. This is all that our legal constraints allow.”

Mr Barnier’s words will come as a boost to Jeremy Corbyn, who has signalled he is ready to support Mrs May’s deal if the political declaration on the future relationship is altered to reflect Labour Party leader’s vision for a soft Brexit.

Under the EU’s latest offer, the next prime minister would have a window of up to four years inside the transition period, which keeps the country inside the single market and customs union, to negotiate and implement alternative arrangements before the backstop is triggered.

Brussels hopes that the future leader will be able to sell Mr Barnier’s commitments to MPs by setting a number of deadlines in the joint search for alternative arrangements.

The negotiations will likely fall under the watchful eye of Mr Barnier’s deputy, Sabine Weyand, who was made the EU’s most senior trade official this week.

In the wide-ranging interview, Mr Barnier blamed Brexit on “typically British reasons”, including “hope for a return to a powerful global Britain, nostalgia for the past”.

He added: “Nostalgia serves no purpose in politics. In my country, too, some politicians still prefer to live in the past.”

Mr Barnier also played down the expectations that he is a frontrunner to replace European Commission President Jean-Claude Juncker, who is expected to step down at the end of October.

Mr Barnier said: “We’ll see where I could be most useful.”