At the end of a week in which Notre-Dame cathedral in Paris was ravaged by flames, sending waves of anguish rolling across France, “Yellow Vest” protesters on Saturday marched once again in the capital and in cities around the country, demanding that President Emmanuel Macron address the nation’s inequality.

Though the number of protesters was down steeply in the 23rd weekend of protests compared with the hundreds of thousands from past demonstrations — fewer than 10,000 turned out across France, with 7,000 in Paris, according to the police — marchers in the center of the city still made their presence felt. 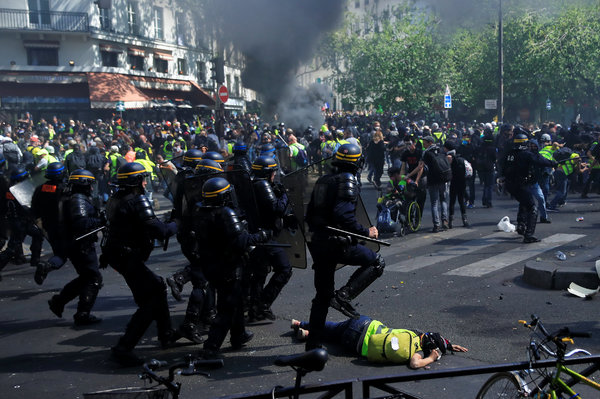 Echoing the tactics of recent weekend protests, some protesters tore down the boards erected to protect shop windows.

In March, French officials said they would ban potentially violent protests in important areas of Paris like the Champs-Élysées, after a surge of violence during Yellow Vest demonstrations that led to intense criticism of the government’s handling of security around the sites. This past week, protesters were barred from congregating near Notre-Dame.

Observers had scrutinized Saturday’s protests for signs of the waning strength of the Yellow Vest movement that began last fall — named after the high-visibility gear that all drivers in France must keep in their vehicles — amid calls for solidarity in the wake of the Notre-Dame blaze, which destroyed the roof and spire of the 850-year-old church.

But after billionaires, companies and worshipers quickly pledged more than a billion euros for the cathedral’s reconstruction, protesters’ anger appeared to be renewed.

Trade union leaders and Yellow Vest organizers denounced the flood of donations amid the battle over the country’s stark inequalities. They said the country’s elite needed to get back to reality and support low-income workers first.

The police said on Twitter that “violent groups” had formed around the marches and that they had detained 110 people by midday Saturday, according Le Monde. Officers also fired tear gas on crowds gathering along the route of two banned marches.

Mr. Macron had been prepared to announce measures to address the inequalities that highlighted by the protesters. But he postponed his speech after the Notre-Dame blaze.

A national consultation that drew responses from 1.5 million participants across France showed that people wanted tax cuts without compromising the country’s generous safety net and provision of public services.