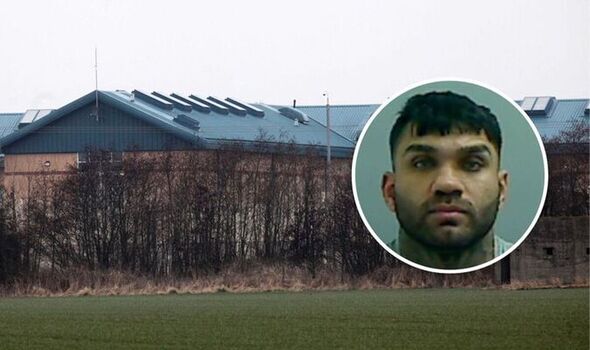 A prisoner – once described as a “gym monster” – says he now struggles to walk due to the agonising pain he’s in.

Convicted loan shark Karl Marron claims he is being denied his basic human rights after an alleged prison assault left him in agony and barely able to walk. He claims he feels forced to pay fellow prisoners to help him wash and has been denied access to his pain medication.

In February, the 34-year-old was jailed for eight years and six months, reports Teesside Live, after he bullied his vulnerable victims into handing over their benefit money by threatening violence and accompanying them to cashpoints.

Teesside Crown Court heard he even moved into the home of one couple who he claimed owed him money after she borrowed £20 and her debt spiralled.

Karl was convicted of four counts of blackmail from June to October 2019; and conspiring to pervert the course of justice, by a jury after a two-week trial. He pleaded guilty to the possession of a class C drug Zopiclone before his trial started.

Following the alleged attack and fall, which both took place while he was on remand at HMP Durham, Karl says he was eventually given support by two carers, every other day, to help him shower. However, when he moved to prison in Northumberland, he was told this would stop.

The 34-year-old, who maintains his innocence, told Teesside Live: “I can’t go to work, at one point I didn’t go outside for seven months. I’m getting worse, it was only up until two weeks ago that I didn’t shower for 29 days. I was getting prisoners in Durham to help me shower and dress but over time it has been messing with my mental health, I am depressed. Eventually I had two carers come in my cell every other day and help me wash.

“I’ve come to this jail and it’s the same healthcare company and I’ve been told I’m not getting the same support here. I’ve been here six months and I’ve had no help at all. I’ve been asking prisoners for help or paying them and if I can’t pay them I just don’t shower at all.”

Karl struggled with injuries to his back, shoulder and hand which he says are as a result of the alleged attack. While he was out on bail, his partner Katrina Allnatt, says their doctor helped get him on the correct medication to deal with the pain as well as his post traumatic stress disorder and anxiety.

Katrina, who was handed a suspended sentence for perverting the course of justice in February, said: “They don’t give him the proper medication which we’ve been told is against his human rights. They think paracetamol is an acceptable drug for pain management. It feels like we’re banging our head against a brick wall to get him the help he needs. Eventually Durham prison did, near the end of him being there, provide him with nurses to help him dress and wash. Since he has been moved to Northumberland, they have taken all that away from him and he’s suffering again.

“The prison officers have been absolutely amazing in Northumberland, they have seen how he has been treated there and they’ve started to intervene. They’ve helped transfer him to a disabled cell with his own shower but he doesn’t have any support.”

Since moving to Northumberland prison, Karl claims he isn’t getting anywhere near the standard of healthcare he would receive on the outside. He says he’s been denied medication, gone weeks without showering and is barely able to walk.

He’s says he’s suffered damaged ligaments in shoulder and hand as well as painful back, leg and knee injuries. Karl says official complaints to the prison and healthcare provider Spectrum have fallen on deaf ears.

“Sometimes I’m in that much pain I don’t sleep for three, four, five nights in a row,” said Karl. “Over time I started getting symptoms of voices in my head and one time I thought the staff were trying to poison me so I wouldn’t eat the food. I dropped down from 109kg to 92kg in three weeks – I was losing 2lb a day.”

Karl, who lived in Middlesbrough before he was jailed, claims he’s being refused medication he had been prescribed as it is seen as exchangeable among prisoners. He said: “The real reason is because it’s a tradable medication for prisoners but I get my medication through the hatch and I have to swallow it. I said because of other prisoners mistakes why should I have to suffer. If someone killed someone in Mexico do I get time for murder, I don’t do I?”

Karl also wants to express his thanks to the prisoner officers who have gone “above and beyond” to support him.