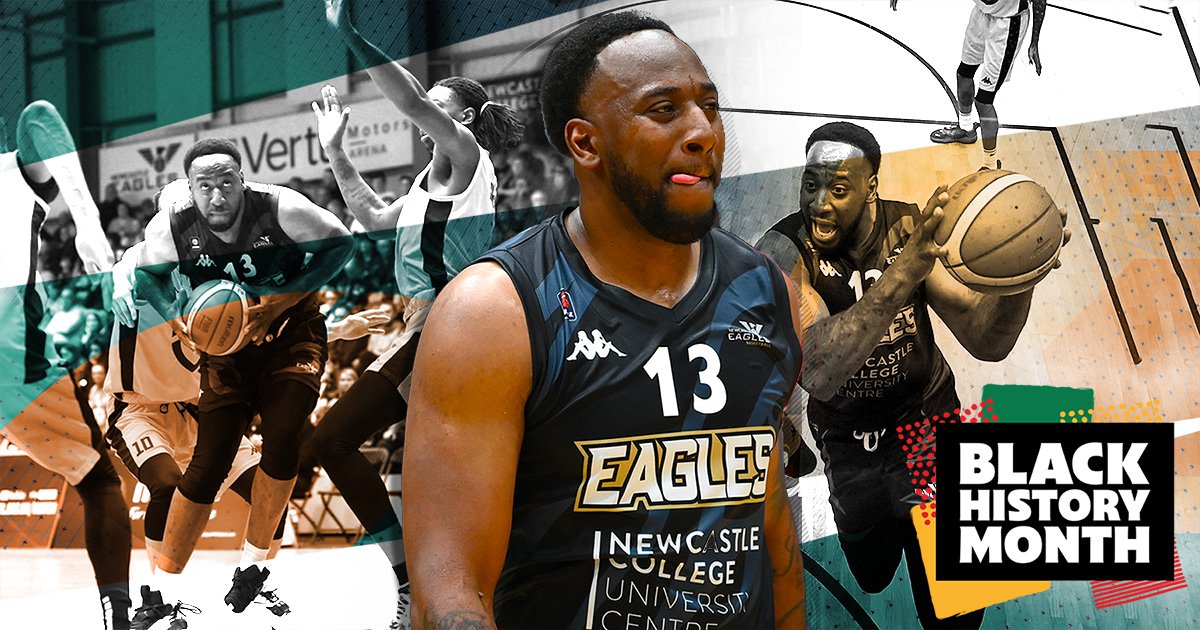 Darius Defoe is a name synonymous with the British Basketball League (BBL).

Originally from Dominica, Defoe grew up in London where he was inspired to try his hand at basketball.

After graduating from the Hackney Community College Basketball Academy Programme, he was called up to join the Newcastle Eagles.

Defoe, known as ‘Mr. 27’, went on to become the most decorated player in BBL history.

He has already become a legend in its own right following his time with the Eagles, but is hard at work to ensure plenty others can follow in his footsteps.

Basketball is one the most culturally diverse leagues in sport, with 70% of players having BAME heritage within the BBL.

Defoe wants young people from all backgrounds to know there’s ‘no ceiling too high’.

The 37-year-old told Metro.co.uk: ‘It’s definitely important for young children to have BAME role models within sport, and we want to continue to support them to realise they can achieve their dreams and anything they set out to do.

‘What I try to preach is that you can achieve anything if you put your heart into it, whether you want to achieve something in sport or life in general, the ceiling is never too high.’

Growing up in London, Defoe was entranced by snippets of basketball games on the TV.

After witnessing ‘incredible moments’ unfold, he knew he wanted to become a part of the sport.

Defoe, who stands at 6ft 9in, said: ‘I think first of all it was my height and being the tallest in my school, it initially drove me to the sport, and then also watching basketball on TV, you see the likes of Big Shaq [Shaquille O’Neal] and Michael Jordan producing incredible moments and growing up, you of course inspire to be like them.

‘This is what made me fall in love with the sport and start my journey.’

Defoe started off by playing for Hackney White Heat, and was involved with every age group – the Under 16’s,18’s, 19’s and 20’s – during his time there.

East London continued to shape the young sport star, as he went on to Hackney Community College where ‘basketball became serious’.

His following success with the Newcastle Eagles was partially forged by the guidance and support of Fab Flournoy, a former player and now coach.

Without him, ‘there wouldn’t be no Darius Defoe.’

In his adopted city of Newcastle, he is often stopped by fans in the sport-mad city, who quiz him about his achievements.

Defoe has won every honour on offer in the BBL – many times over – and holds the record as the league’s most decorated star with a sensational 27 trophies to his name.

In 2021, he was awarded Sport Newcastle’s top honour.

Picking the most memorable moment of his career is by no means an easy task, but Defoe has managed to narrow his achievements down to one favourite.

‘I would say the first Playoff-final against the London Lions at the O2 Arena would be my highlight’, he said.

‘I’ve never said this, but it was a teary moment, having my family in crowd, my mum, my sister, my aunties and my daughter there to see me lift the trophy, that was definitely a career highlight.’

As well as raising his own children Defoe, is also raising a generation of new players.

Through his coaching and work with Hoops4Health, he hopes to encourage people from all walks of life to pick up a basketball.

‘I just want to support as much as I can and help them become the best versions of themselves’, said Defoe.

‘If they have any questions, I’m always willing to give advice following my experiences and what I’ve learnt overtime. I enjoy going into schools as part of the club’s Hoops4Health programme and seeing the smile on the kids face when we walk in, and although we’re not in for the whole day it’s about ensuring they get the most from the time we have with them.

‘The kids are always clued in and willing to learn about basketball and the importance of a healthy lifestyle.

‘I always said I wanted to go into my daughters’ school to deliver the programme and she told me that she and her classmates loved it and that made me proud, that she was able to see a different side to me other than her dad.’

‘I took over the coaching role for the U14s over the summer, and to see the difference between then and now is incredible.

‘It’s early in the season, and there’s still a long way to go, but they’ve really impressed me and my assistants and it’s great to see their progress.

‘I think for them they weren’t expecting me to be their coach at the start of the season, so they were really excited, and I just want to continue providing guidance and knowledge of the game which will hopefully help them in the future and become the players they want to be.’

And for more on Hoops for Health, click here