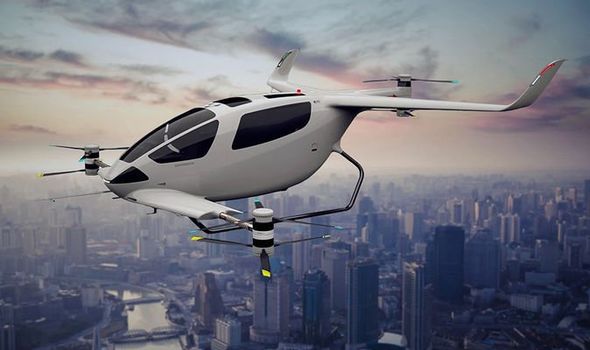 Martin Warner hopes his six-seater Y6S Plus craft will be making short trips within two years. The millionaire entrepreneur says the 125mph air cab will carry a full load of passengers for as little as £100.

His firm Autonomous Flight aims to begin taking “pre-orders” for the battery-powered shuttles, which do not require runways, next month.

He called the move an “exciting announcement” for the electric vertical take-off (eVTOL) industry: “We are edging ever closer to a reality where drones will become a regular mode of transport in cities. We are years away from this reality, not decades.”

He aims to have the Y6S Plus, which has six propellers and would travel up to 100 miles on a single charge, ready by 2024.

It is a development of the firm’s two-seat Y6S prototype, initially with a pilot but intended to be fully autonomous once the technology is approved and safe.

Up to nine London routes are planned, including a 12-minute hop between Heathrow Airport and Charing Cross.

Three craft would serve each route and cities such as Manchester and Liverpool are earmarked too.

A source said: “This will become a very affordable way to travel. An air taxi for a typical 12-minute flight in a city like London will eventually come down to about £100 for a group of six ‑ similar to a high-end Uber fare.”

Mr Warner, 49, added: “I’m proud to say that Autonomous Flight is at the forefront of this disruptive technology.

“The past 12 months have been marked by key company milestones and we are excitingly taking that bold step from concept, to prototype and eventual deployment.”

He added: “Governments and larger companies clearly see the growth potential on offer and there is now a race to become a global leader in urban air mobility.”

Mr Warner was born in Biggin Hill, Kent, but now lives in the US.