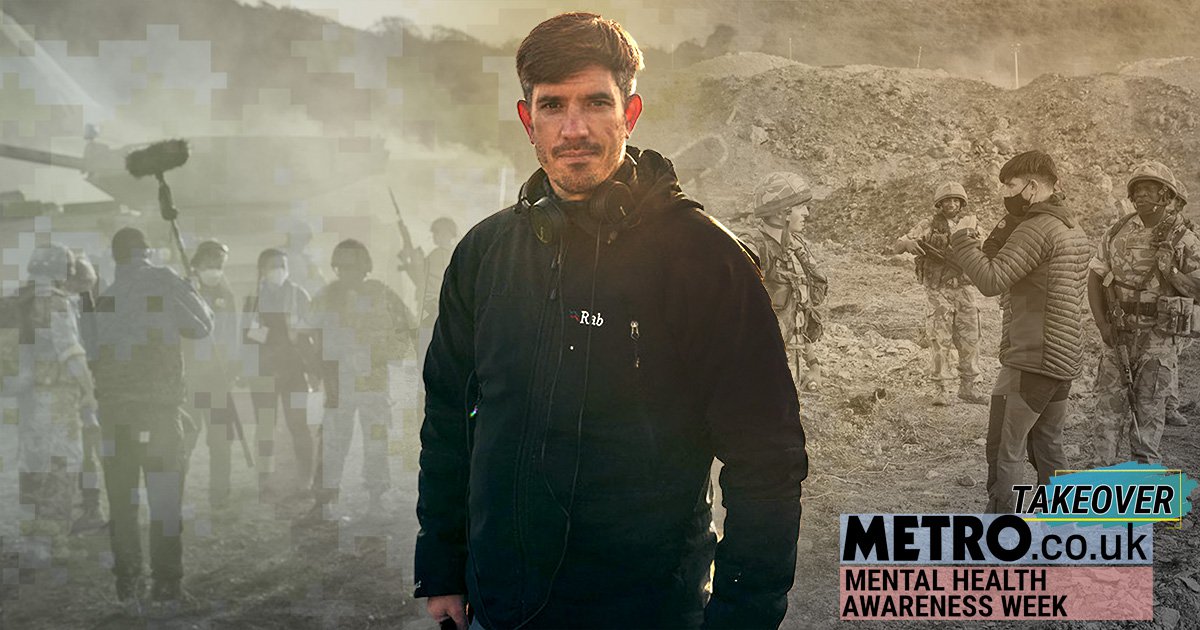 A decorated veteran who led the charge at the Battle of Danny Boy has said one of his hardest battles was seeking help for his troubled mind.

Brian Wood was awarded the Military Cross after routing the enemy in brutal, close-quarters combat at the ferocious engagement between British troops and insurgents in Iraq.

He was a young Lance Corporal when he and his comrades fixed bayonets and advanced over open ground towards trenches occupied by the heavily-armed militia north of Basra.

Despite the award for valour under fire, he suffered PTSD and was pursued through the courts by now-disgraced human rights lawyer, Phil Shiner.

Speaking to Metro.co.uk for Mental Health Awareness Week (MHAW), Brian said he hopes his story of overcoming extreme adversity can be a catalyst for people outside the forces to seek help when they feel low.

His story has now been turned into an acclaimed BBC Two drama which traces his journey through the battle and into the courtroom as he faced baseless accusations of murder, mutilation and mistreatment.

Having left the Army, Brian has replaced PTSD with the concept of ‘post-traumatic growth’ and is the driving force behind his clothing brand and guiding mantra, Keep Attacking.

The former teenage recruit said: ‘War is brutal, war is carnage, and the battle scars are always going to be embedded in me.

‘I look at it in a positive light now, but when I was amongst it all I was lower than a slug’s belly at times.

‘I was under the most extreme pressure, not only with the allegations but with trying to manage everything I’d done and seen and not having the courage to open up about it because back then it was all tough upper-lip with frontline soldiers. Over the years it has become easier to open up and talk, although there is still work to be done.

‘Some days I still find easier than others but fitness is my freedom, my mentor for me, my time. I look after my sleeping better now and I try not to be around negative people.

‘It’s about always having a purpose and having a mission statement and I’ve extracted some brilliant tools to keep me occupied and busy.

The five-hour firefight took place on May 14, 2004, when Brian, who was aged 23 at the time, and his company were ambushed by the insurgents near a checkpoint named Danny Boy.

‘We were heavily ambushed, it’s probably the most violent situation that I’ve ever been in,’ he said.

‘A command was given to us from my superior which was basically to leave the armoured vehicle and go and counter the ambush.

‘We were outgunned and heavily outnumbered, so it was trench warfare as well, which doesn’t happen very often.

‘It was very close and personal going across open ground.

‘It was really intense and needed emotional courage, true grit and real great British values to get the job done. There was a number of enemy militia fighters killed and we took a number of prisoners of war.

‘There were weapons systems everywhere, there was kit, there was shouting and screaming at us and we were trying to control the situation while dealing with all this.

‘I’ve never experienced anything so close and personal and there was a lot trauma on the battlefield because there were militia fighter who had been hit by 30mm, a huge calibre of ammunition from our Warrior.’

Twenty-eight enemy fighters were killed and nine taken prisoner before Brian and his comrades, who did not take any casualties, were given the gruesome task of collecting the bodies to see if a senior Mahdi Army commander could be identified from DNA.

It was first bayonet charge by British soldiers in 25 years and would leed to one of Britain’s highest awards for gallantry being awarded to the Princess of Wales’s Royal Regiment soldier.

However, one of the toughest battles of his life came on civvy street as he struggled with PTSD and was pursued through the courts by Shiner.

Having been awarded the Military Cross and achieved the rank of Colour Sergeant, Brian found himself accused of war crimes at the Al-Sweady Inquiry, which took five years and cost taxpayers nearly £25million. A judge would find that almost all the allegations were based on ‘deliberate lies’.

Shiner, who founded and ran Public Interest Lawyers, which pursued claims of torture and murder against British soldiers, was struck off for multiple counts of misconduct after a tribunal found he had acted dishonestly.

The biggest hit Brian took from one of Britain’s biggest-ever public inquiries was as a husband, father and son.

‘You can take chunks out of me all day long and I’ll try and get back each time but when it comes to your family, that ring of steel, that body armour that I put round them. It just doesn’t work anymore,’ he said.

‘There was schoolyard gossip which my son was fully involved with, where all of a sudden his dad was a murderer.

‘It was tough and very demanding for someone who is just a normal person.

‘The hardest thing was accepting that someone was questioning my integrity after I’d been awarded the Military Cross by Her Majesty the Queen for gallantry and bravery under enemy fire.

‘Then to be accused of these atrocities, I was like, “how?”

‘The traction that it got and the length it took for me to be acquitted has been a long time.’

Brian, now 40, who lives in Hampshire, sees his own struggles with mental health as essentially no different from those faced by people in civilian life, with accepting the need for help being key to recovery.

Struggling to reintegrate to family lfe, a conversation with his father – his family has 300 years’ of military service and his son is continuing the tradition – was key to his fightback and features in the feature-length drama by the BBC and Expectation TV.

He eventually ‘knocked on the door’ for professional help in 2009 and it was the catalyst for his turnaround and the creation of Keep Attacking.

‘The biggest thing for me is acknowledging that there’s a problem and to have the ultimate courage to seek professional help,’ Brian said.

‘I did that in an all-male organisation where I was flying in the military but I still carried so much weight around with me and I needed to shift the cargo.

‘I had to display the same courage I’d shown on the battlefield but in a room with a professional, asking for support and help to get better.

‘I managed to pluck up enough courage to knock on the door and it changed my life forever.’

As we start #mentalhealthawarness week I would like to share this clip from Danny Boy (a conversation I actually had with dad). I found it very difficult to reintegrate into family life and talking about the aftermath of war. I eventually got help and it changed my life. pic.twitter.com/NrqblybcoS

The dramatization will bring the story of Danny Boy to a new audience but Brian would be happy even if his backstory has a modest reach.

‘Now I’m focused on helping others through their challenging times,’ he said.

‘Regardless of who you are, you will have a run-in with adversity at some point, whether it’s work, family or anything else.

‘You need that emotional resilience to keep moving forward each day and to keep attacking the day.

‘If my story inspires just one person, I’ve achieved my aim.’

Danny Boy airs at 9pm on Wednesday, May 12 on BBC Two and BBC iPlayer

With a brilliant team that includes Alex Beresford, Russell Kane, Frankie Bridge, Anton Ferdinand, Sam Thompson, Scarlett Moffatt, Katie Piper and Joe Tracini, each of our guest editors have worked closely with us to share their own stories, and also educate, support and engage with our readers.

If you need help or advice for any mental health matter, here are just some of the organisations that were vital in helping us put together our MHAW Takeover: