BBC radio host Nick Robinson lashed out at British MEP Stuart Agnew, accusing his party of being “obsessed” with Nigel Farage. Mr Robinson also claimed UKIP has “already lost” the European elections, arguing they are “way behind” in the opinion polls. The Today Programme presenter asked: “What is the point of UKIP without Mr Farage?” Mr Agnew responded: “Because we are a political party with a membership as a set of policies. We are not a one man band.”

Mr Robinson hit back: “But there are only four of you left UKIP MEPs. There are 14 who have joined him in the Brexit Party.

“You are way behind in the opinion polls. You have lost already, haven’t you?”

The UKIP MEP denied: “No. A lot of those 14 have not secured places on the Brexit Party’s list.

“I think that’s very interesting. Several went across to Nigel, I am assuming they get high places on the list, and they are simply not on the list at all.” 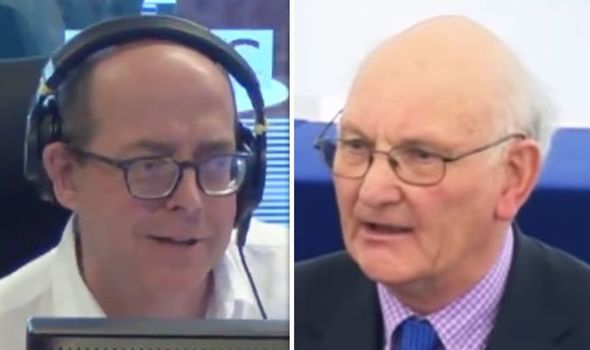 You have lost already, haven’t you?

Mr Agnew later added: “The Brexit Party doesn’t have policies, it’s not a membership based organisation.”

Mr Robinson argued: “But you are rather obsessed with Nigel Farage aren’t you? Yesterday UKIP released a video of Mr Farage with some things that he had said about Islam, saying that the Brexit Party had an anti-Islam agenda.

Mr Agnew replied: “I didn’t actually hear it so I can’t really comment on it. A lot of the MEPs who left us to join Nigel did so because they were unhappy about our stance on Islam.”

The comments come as the Brexit Party is the bookmakers’ favourite to top the results on May 23 despite standing in its first election.

After initially storming into third place in the polls with 15 percent of the vote before they had even officially launched, the Brexit Party is now in first place with 27 percent in YouGov polling.

In a speech to supporters in Newport on Tuesday evening, Mr Farage said his return to front line politics was spurred by wanting to “fight back” against politicians in Westminster.

He said: “I decided the time had come to fight back, and I formed this Brexit Party and I vowed, if I had to come back into public life, this time no more Mr Nice Guy.

“This battle now is not just about Brexit; it’s not just about getting us out of the European Union. It is in fact about sweeping away a political class who serve nobody but themselves. This is about changing politics for good.”