During a heated debated with Brexit minister Kwasi Kwarteng, the BBC host criticised the decision to delay Britain’s exit from the European Union. It was agreed among EU leaders that Brexit would be delayed until October 31 following a heated summit in Brussels on Wednesday evening. In response to the Brexit extension, the BBC Radio 4 Today programme host said: “Mrs May said in February that you’ll know as Prime Minister I am not prepared to delay Brexit any further than the 30th June so this extension means the Government has failed.”

This extension means the Government has failed

The Brexit minister replied and admitted it is “not a secret” the Government has struggled to get MPs to support her controversial deal as he insisted the Prime Minister will continue to push for support of the treaty.

In response, Mr Humphrys blasted: “But in a sense, this is the worst possible outcome because the extension isn’t long enough to keep MPs’ feet close to the fire and it keeps open the prospect of yet another delay.”

Mr Kwarteng insisted the extension is now long enough to get her deal through but the BBC host hit back and pointed out how the key problem for the Prime Minister is there is no will to get her controversial deal through Parliament.

Mr Humphrys said hopes from the Government that the Prime Minister will get her deal through before the 22nd May is “puzzling”.

Mr Kwarteng replied: “It has been a difficult process. But I think that people are beginning to see that a deal is the way out of the EU.

“And I think once we have got the deal we can go to the next phase of the negotiation.” 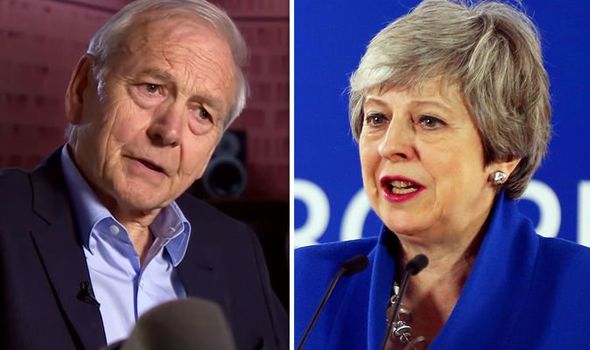 The source said: “France went on its own and has broken EU unity, that really surprises us.”

France was prepared to accept a no-deal divorce if it meant that Britain was prevented from meddling in EU decision-making.

EU leaders were locked in a dinner meeting for six hours as they battled with Mr Macron’s bid to force through a short delay to the bloc’s Article 50 exit clause.

After hours of debate, EU leaders agreed Brexit will now be delayed until October 31 with a review to happen at the June 21 European Council summit.

The Brexit delay will still see Britain forced to hold European Parliament elections on May 23 as one of the guarantees demanded by Brussels.

Britain will be expected to leave the bloc by June 1 if the country fails to participate in the EU elections.

European Council President Donald Tusk had pushed for a year’s delay to Brexit, proposing a deadline of March 2020.

Speaking to reporters, Mr Tusk said he favoured a longer delay, but that six months “could be enough for a good solution”.

European Commission President Jean-Claude Juncker added that: “No deal would be a disaster – everyone knows that.”

He said if Parliament ratifies the withdrawal agreement, the extension would be terminated – hence the ‘flexible’ deadline.

He added that the UK could “reconsider” its Brexit strategy that might lead to changes in the political declaration, but that the withdrawal agreement is not up for renegotiation.

Finally, he emphasised the UK could still revoke Article 50 and cancel Brexit altogether.

He said: “Let me finish with a message to our British friends: this extension is as flexible as I expected and a little shorter than I expected, but it’s still enough to find the best possible solution.

“Please do not waste this time.”