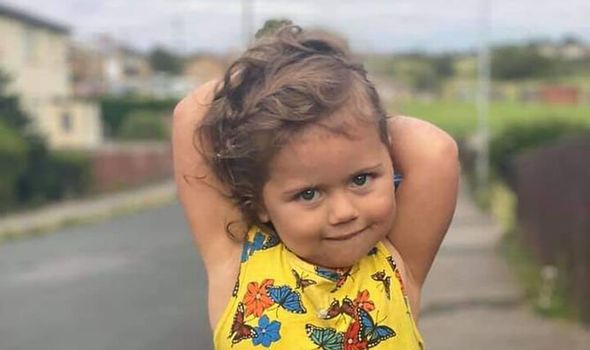 Darcie Thornton, three, died after her parents Luke Thornton and Rebecca France made the tough decision to switch off her life support machine on March 8.

The toddler, who was asthmatic, had been taken to hospital on March 5 with breathing difficulties but her condition deteriorated, Yorkshire Live reports.

It’s no way for a three-year-old, she was such a character. You only had to see her once to fall in love with her. I had always said she was beautiful

When they arrived at the hospital, Darcie kept laying on her stomach and, after Luke was told by doctors it was bad for her, he picked the toddler up and noticed she wasn’t breathing.

When her condition worsened the next morning, the girl was dashed to Leeds Children’s Hospital and was hooked up to wires and tubes.

After a CT scan on March 8, doctors told her parents that due to the swelling on her brain, “she would never be the same”.

They were told Darcie would not be able to see again or even feed herself if she survived, and although they accepted the devastating news, they then had to make the hardest decision of their lives.

Speaking tearfully about when he found Darcie not breathing, Luke said: “They were resuscitating her for half an hour, she stopped breathing and her heart had stopped. They said what happened, somehow her left lung had collapsed causing her heart to stop.

“We were transferred to Leeds the next morning where she was unconscious through this, they were monitoring her. I spoke to the doctor and said be honest with me, what’s going on, she wasn’t this poorly.”

Luke, of Dewsbury, West Yorkshire, added: “He (the doctor) said ‘I’m not confident she’s not going to survive and if she does, she won’t be the same’. Any sort of damage that’s not an issue and Monday morning they took her for a CT scan.

“She was back half an hour later and they got us in another room with the results. The swelling on her brain was too bad. If she was to come out of this, she couldn’t feed herself. It’s what me and her mum decided.”

Speaking on whether she could have had a chest infection, Luke said: “They got a lot of thick stuff on her lungs which they said was really thick stuff.

“It’s no way for a three-year-old, she was such a character. You only had to see her once to fall in love with her. I had always said she was beautiful.

“She was above her years.”

Darcie was christened shortly after dying and leaves behind her parents and siblings Ellie, Tommy and her two-year-old twin brothers Bobby and Jack.

The little girl had just started nursery at Orchard Primary Academy in Dewsbury, in September and news of her death has shocked and saddened the community.

Luke added: “I don’t think I will ever accept it. I think it’s hard to accept that I can never hold her hand again or kiss her good night. My heart’s broken.

“It’s the children I have to be strong for. It’s the way I have to look at life now and it’s just a pain I’m going to have to live with.

“She stole my heart from the first moment I laid my eyes on her. She loved life, she was always happy. The only time she cried was to get her own way – that was her.

“She knew she was loved and she knew how beautiful she was. She was my princess.

“I always think it the worst thing that could happen to any parent (losing a child), when it actually happens it’s worse than you could ever think for your kids.”

Luke praised headteacher of Orchard Primary Academy, Matthew Carbutt, who has been supporting the family and has since raised over £7,400 to help the family with funeral costs.

Matthew, from Wakefield, ran 10,000m sprints in under 10 hours last weekend to raise the funds.

As he reached the finish line at Pugney Country Park, on Sunday evening, he was met by Darcie’s siblings and her mum as well as colleagues who were supporting him.

Matthew said: “I wanted to help and support the family, no one saves for the cost of their child’s funeral.

“It really shocked us all as a school, it was difficult on a personal level, she’s the same age as my little boy.

“We didn’t know her that well because she was new to the school. I don’t think some people (staff) took it the first time I talked to them.

“It’s incredibly sad, the more I was thinking about it, the sadder it got. I think one of the things that got me was just that she had started the journey with us.

“She would have been here for a long time until she was 11-years-old, so sad that she never got to do that.”

Pope Francis Opens Summit on Sexual Abuse: ‘Hear the Cry of the Little Ones’