MOSCOW — The tray tables were being raised and the seat backs returned to their upright positions as passengers on Ryanair Flight 4978 prepared for the scheduled landing in the Lithuanian capital, Vilnius. Then the plane made an abrupt U-turn.

For many passengers, it initially seemed like one of those unexpected delays in airline travel. But after the pilot announced the plane had been diverted to Minsk, the capital of Belarus, one passenger — Roman Protasevich, a prominent Belarusian opposition journalist who had been living in exile since 2019 — grew terrified, certain that he faced arrest.

“He panicked because we were about to land in Minsk,” Marius Rutkauskas, who was sitting one row ahead of Mr. Protasevich, told the Lithuanian broadcaster LRT upon arrival in Vilnius.

Sunday’s ordeal — described by many European officials as an extraordinary, state-sponsored hijacking by Belarus to seize Mr. Protasevich — quickly led to one of the most severe East-West flare-ups in recent years.

Meeting Monday evening in Brussels, European Union leaders called on all E.U.- based airlines to stop flying over Belarus and began the process of banning Belarusian airlines from flying over the bloc’s airspace or landing in its airports — effectively severing the country’s direct air connections to Western Europe. 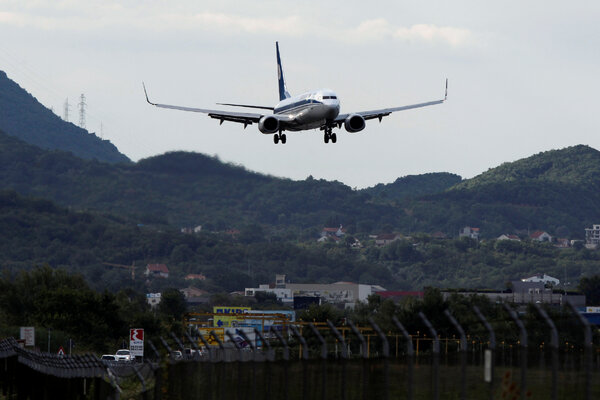 The measures represented a harsh Western broadside against Aleksandr G. Lukashenko, Belarus’s authoritarian president, who is already under E.U. sanctions for rights violations over his brutal repression of protests last year. There was no indication, however, that the intensified squeeze would alter Mr. Lukashenko’s resolve — especially with President Vladimir V. Putin of Russia steadfast in his support.

On the contrary, Mr. Lukashenko on Monday tightened restrictions on dissent even further, signing new laws that banned things like online live streams from unauthorized protests.

“Lukashenko does not see it necessary to bow to the West’s demands — he has Russia, which he relies on,” said Artyom Shraibman, a Minsk-based nonresident scholar at the Carnegie Moscow Center. “He has not been cornered.”

The moves came as new details trickled out suggesting that the landing of the Ryanair Boeing 737-800 in Minsk on Sunday was an elaborately staged operation, with a bomb hoax and a fighter jet scrambled by Mr. Lukashenko to escort the airliner. The Lithuanian police said that of the 126 passengers who took off from Athens, five stayed behind in Minsk — Mr. Protasevich and his girlfriend, Sofia Sapega, who were both detained, plus three unidentified individuals.

One Lithuanian official said the three included two Belarusian citizens and one Greek. But uncertainty about their identities raised questions over whether they had any role in the operation.

“We believe there were some K.G.B. agents offloaded at the airport as well,” Michael O’Leary, the C.E.O. of Ireland-based Ryanair, told Irish radio on Monday. “This was a case of state-sponsored hijacking.”

Belarusian state television broadcast a report rejecting the idea there were K.G.B. agents on the plane, instead showing three people who said on camera that they had decided to stay in Minsk by their own choosing. They included a Greek man who said he had been traveling to Vilnius on his way to visit his wife in Minsk.

In Lithuania, the police launched an investigation on suspicion of hijacking and kidnapping, and interviewed passengers and crew. They were told that the fighter jet dispatched by Mr. Lukashenko to escort the flight had not forced the Ryanair plane to land, according to people with knowledge of the investigation who were not authorized to speak publicly.

Instead, these people said, the pilot had decided to land the plane in Minsk after Belarusian air traffic control had requested that he do so because of a bomb threat on board.

“The decision was made by the captain of the liner after consulting with Ryanair management,” Rolandas Kiskis, head of the Lithuanian Criminal Police Bureau, told reporters in Vilnius.

But no bomb was discovered, contributing to accusations that it was all a ruse to get the plane to land.

The arrested journalist, Mr. Protasevich, who co-founded an account on the social media app Telegram that helped galvanize and coordinate the mass protests against Mr. Lukashenko last year, had been placed on a list of terrorists by the K.G.B., Belarus’s intelligence service, still known by its Soviet-era initials.

A pro-Lukashenko Telegram account posted a 29-second video of Mr. Protasevich late Monday evening. It showed him sitting with arms folded at a wooden desk, telling the camera that he is in Minsk’s central Detention Center No. 1 and is being treated “with maximum correctness.” It was reminiscent of other confessional videos that critics of Mr. Lukashenko have been forced to record while in jail.

“I continue to cooperate with the investigation and am giving confessional testimony on charges of organizing mass unrest in the city of Minsk,” Mr. Protasevich said.

The video was the latest sign that Mr. Lukashenko, who has ruled for 26 years, did not intend to shirk from confrontation with the West. An official in the Belarus Transportation Ministry, Artyom Sikorsky, on Monday doubled down on Minsk’s official version of events: that the plane had been diverted because of a bomb threat. He read out an email that he said had been sent to the Minsk airport from someone who claimed to be representing Hamas — the Palestinian militant group — threatening to punish the European Union for supporting Israel in the recent war. (Hamas denied any connection to the incident, Reuters reported.)

By the end of the day, Mr. Lukashenko had plunged headfirst into yet another diplomatic showdown. He expelled the ambassador and the entire diplomatic staff of neighboring Latvia from Minsk in response to the mayor of Riga, Latvia, hoisting the white-red-white flag of the Belarusian opposition.

A prime reason for Mr. Lukashenko’s apparent confidence was seen in Moscow, where Russian officials and pro-Kremlin commentators lined up to voice their support.

“We consider this issue to be a domestic affair of Belarus,” Maria V. Zakharova, the Russian Foreign Ministry’s spokeswoman, said, according to Interfax. “The actions of the Belarusian aviation authorities were in line with international standards.”

The International Civil Aviation Organization, an arm of the United Nations, has said the Belarus action may have violated a longstanding treaty that has governed commercial airlines for decades. The organization called an urgent meeting for Thursday to discuss it.

In recent years, Mr. Lukashenko had profited by playing the interests of Russia and the West off against one another. But amid last summer’s popular uprising against him over his disputed re-election, Mr. Lukashenko threw in his lot with Mr. Putin — and has relied on his support ever since.

And some analysts said the restrictions could require costly rerouting for European airlines, which are already avoiding parts of Ukraine, Belarus’s southern neighbor, because of conflict with Russia.

The flight bans could cause new problems for Mr. Lukashenko inside his country, where the ease of travel to the neighboring European Union had long softened the strictures of living inside an authoritarian state. Ukraine, which is not a member of the E.U., also said it would ban flights to and from Belarus. The growing isolation means that Belarusians will increasingly need to travel east to Russia in order to get out of the country.

Yevgeny Lipkovich, a popular Minsk-based blogger and commentator critical of Mr. Lukashenko, said that his own travels abroad had allowed him to “remain an optimist, despite the regime’s best efforts to force me into depression.”

“If they close down the air loophole, there’s no question that the pressure inside the country will increase,” Mr. Lipkovich said. “And it’s disgusting to live in a pariah state.”

Reporting was contributed by Ivan Nechepurenko from Moscow; Tomas Dapkus from Vilnius, Lithuania; Stanley Reed from London; and Matina Stevis-Gridneff and Monika Pronczuk from Brussels.

George, Charlotte and Louis clap for carers joining Kate and William in support for NHS