Mr Bercow has constantly been accused of rebelling against his own party in order to try and sabotage Brexit. The Speaker of the House of Commons once again was drawn into hot water on Wednesday as he ordered, Chancellor of the Duchy of Lancaster to behave and a “be a good boy”.

Mr Bercow’s savage attack on the Mr Gove comes amid a raucous and full day of debates in the Commons on Wednesday.

Astonishingly, not only did Mr Bercow launch a devastating attack on Mr Gove but he also mentioned the personal life of the MP as he referenced his children’s schoolmaster.

Attacking Mr Gove, the Speaker said: “I say to the Chancellor of the Duchy, that when he turns up at our school as a parent, he’s a very well-behaved fellow.

“He wouldn’t dare behave like that in front of the headmaster and neither would I. 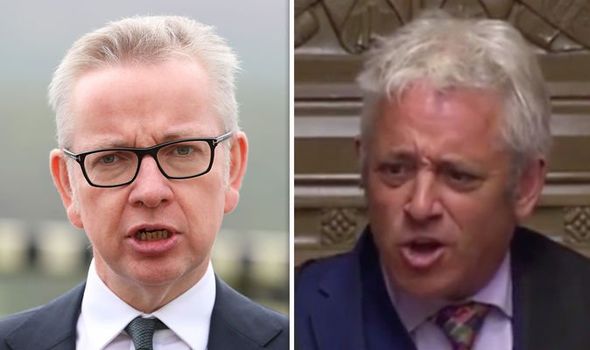 “Don’t gesticulate, don’t rant, spare us the theatrics, behave yourself, be a good boy, young man. Be a good boy.”

Mr Gove was immediately defended by his wife, Sarah Vine who criticised the Speaker for mentioning the pair’s children in the Commons.

In a tweet, the Daily Mail journalist said: “Insult me, insult my husband – but don’t bring the kids into it. Please. And thank you.”

The attack is just the latest in a series of events during Mr Bercow’s tenure as Speaker of the House.