The Speaker was confronted by Tory MP Sir Patrick McLoughlin on whether the proposals put forward by MPs on Wednesday, and rejected by the House in a series of indicative votes, would be stopped from being presented again on Monday. The Conservative backbencher asked the Speaker whether the Brexit options would receive the same treatment as the Prime Minister’s deal and be denied further votes unless presented with substantial changes. Sir McLoughlin said: “Can you confirm that, if we follow on from your ruling earlier on today, none of these other questions can be put again?”

The Speaker responded claiming the process agreed by MPs on Wednesday afternoon provided for the indicative votes to have a second stage of debate on Monday and that he would be respecting the will of the House by keeping the business of the House unchanged despite the negative results of the votes.

But as he moved on to give way to former Tory MP Anna Soubry to make the next point of order to the House, the Commons erupted in disagreement and the Speaker was forced to make a further point to regain control of the House.

Struggling to be heard, he said: “Let me just explain one thing in this place. The Right Honourable gentleman is a very senior member of this House and he is a former chief whip.

“He is not the Speaker of this House and it’s not for the Right Honourable gentleman to presume the order in which matters are considered.

“And I trust that he won’t suppose that it is for him to do so. 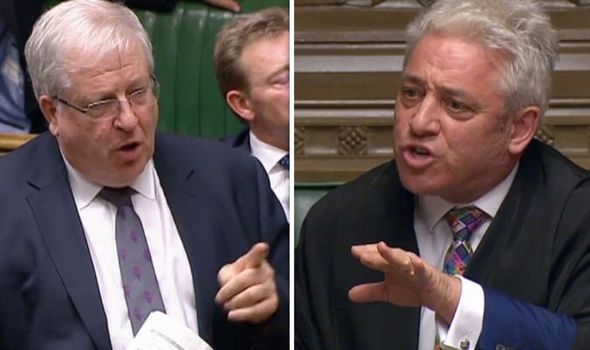 Let me say very gently to the Honourable gentleman: I treat him with respect, I’m not intimidated

The House rejected all eight options presented by MPs as alternatives to Theresa May’s Brexit proposal on Wednesday.

Ahead of the votes, the Prime Minister has promised Tory MPs she will be stepping down and hand over the next phase of the negotiations to someone else in her Party once the withdrawal agreement has been approved by a majority of MPs in Parliament.

The promise comes as Mrs May’s latest attempt to win the support of the DUP and hardline Brexiteers in her Party for her deal.

The Prime Minister’s decision to tell the 1922 Committee that she “won’t stand in the way” of new leadership prompted leading Brexiteer Jacob Rees-Mogg to say: “The great joy of the Tory Party is it has so many talented people in it.

It’s like finding a fast bowler in Yorkshire. You just call and one appears.”

But shortly before the results of the votes, DUP leader Arlene Foster said her MPs could not back Mrs May’s agreement.

She told Sky News: “I do want to pay tribute to the Prime Minister to her team and the way they have engaged with us through this process.

“However, significant gaps do remain. We have made progress in relation to domestic legislation, but, and it is a big but, it doesn’t deal with the treaty level changes that were required in relation to the withdrawal agreement.”

She added: “What we can’t agree to is something that threatens the Union, that has a strategic risk to the Union.

“For us in the Democratic Unionist Party, the Union will always come first and that has been the issue right from the beginning of all of this.

“You will remember this back in December of 2017 we warned about the dangers of the backstop.

“We cannot sign up to something that would damage the Union.”