A group of hardy climbers have battled rain, wind and fog as part of Metro’s 2022 Lifeline campaign to raise thousands for charity.

Alongside Metro.co.uk staff and readers, supporters of PAPYRUS Prevention of Young Suicide – including bereaved relatives and friends – came together to reach the summit of England’s highest mountain in an overnight fundraising hike on Saturday.

The group set off at 10.30pm, reaching Scafell Pike’s summit at 4.30am, before returning to ground level as the sun rose over the Lake District.

Many carried with them the memories of loved ones lost to suicide and spoke of the ‘healing process’ the hike provided.

PAPYRUS ambassador, actor Cat White was first to reach the summit and walked in honour of her friend Simon.

Despite the intensity of the challenge, she said ‘adrenaline’ had kept her going, alongside the camaraderie among her fellow hikers.

‘It definitely did feel like Simon was with me,’ she said.

Cat added: ‘When I was asked if I wanted to take part, there wasn’t really any question for me, I just knew I had to do it. 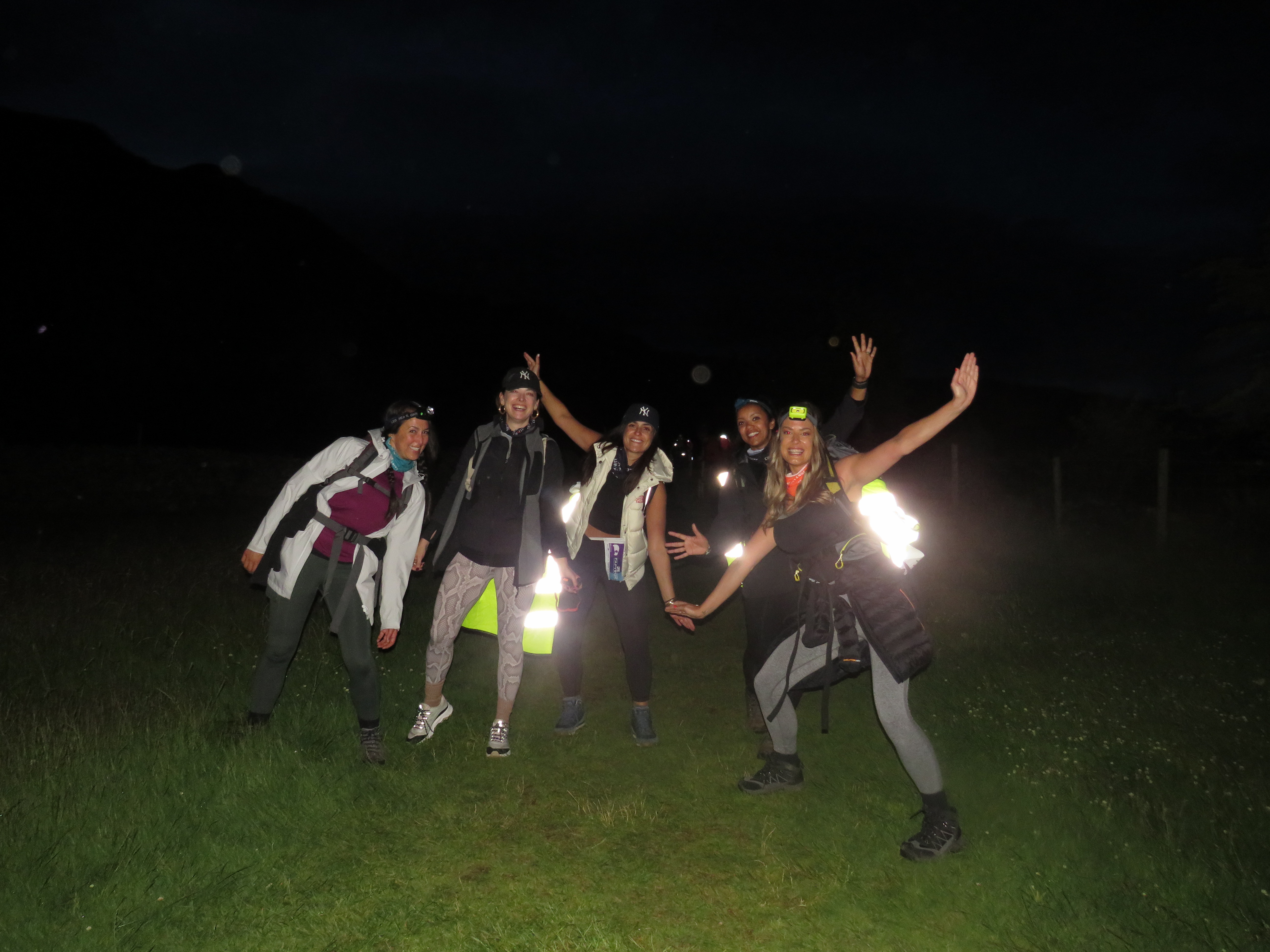 ‘Yesterday I kept thinking “I’m not ready, I can’t do this” but adrenaline just kept us going today. I do feel really emotional, I just don’t have words to describe this. It was glorious.’

Conditions atop Scafell Pike were not kind to the hikers, with lashing rain and strong winds making the already difficult ascent extra taxing.

The group also spent hours bouldering, using their hands and feet to at points to crawl over mismatched rocks that had been made slippery by the rain.

As the adventurers struggled to keep their balance, some joked it was like ‘an elaborate game of Twister’ or ‘interpretive dance’.

Andy Airey and Mike Palmer, walking in memory of their daughters Sophie and Beth, carried PAPYRUS flags the entire way as a constant reminder of the cause at hand.

The pair make up two thirds of the ‘3 Dads Walking’ group.

Not only do they raise huge amounts for charity, but they also highlight the impact getting outdoors can have on mental health.

Andy, a trustee for PAPYRUS, said: ‘Growing up in the Lake District, it’s something I suppose I knew all along – but the first walking challenge I did with 3 Dads Walking really brought it home.

‘It’s so important to walk and talk, and to do it outdoors.

‘Sitting opposite each other at a table, it’s sometimes hard to talk about personal things – but walking side by side, it’s easier to be honest and to share – and it really does save lives.’

Intrepid hikers returned back from Scafell Pike from around 7.30am onwards on Sunday, greeted by huge cheers and claps from Charity Challenge teams who had prepared a large breakfast.

For many of the participants, it was only then that the sheer scale of their achievement began to sink in.

Allan Graham and Kate Bates had laced up their boots for Kate’s daughter Grace, who they lost to suicide.

The 17-year-old had seeking counselling, but over stretched services meant she hadn’t received any professional support prior to her death.

The couple had carried Grace’s ashes with them to the summit.

‘This has been so challenging, but so incredible. The camaraderie overnight has been out of this world.

‘I’m not sure it’s sunk in what we’ve done. But it’s been a healing process.

‘We’re both thrilled to have met everyone, the PAPYRUS team too, and so proud to have been able to do this.

‘We did this to help others and to spread Grace’s love, and it was a fitting time and place to spread some of her ashes.’

Upon finishing their hike, weary walkers gathered in the Sticklebarn, near the base of Scafell Pike, for final emotional farewells before heading to their homes around the UK.

Sarah Petherbridge had taken part in memory of her son Zak, who she lost to suicide when he was 18.

He had hidden his intense struggle with mental health from friends and family and died three weeks after starting university.

Sarah had been joined on the hike by Debbie Taylor, who explained she didn’t want her friend to have to walk alone.

The pair had different walking paces, but made sure to reunite for the final half hour so they could complete the hike together.

‘I don’t know what to say,’ said Sarah through tears upon finishing the gruelling nine-hour feat.

‘I am definitely so proud, and I’m so glad that Debbie came.

‘I hate the fact I have a reason to do this and, like always, it’s going to be hard to go home without him there. But I’m proud, really proud.’

Many on the overnight hike exchanged memories of their loved ones – and within hours had gone from strangers to friends.

Paige Winter, from London, described the feat as ‘one of the hardest challenges’ she’d ever done.

The 30-year-old had been invited on the climb by a friend, and was eager to take part in a bid to help defeat the stigma that still remains for many about talking about mental health.

‘It was really special having so many like-minded people around. It’s been such a challenge but it’s just such an amazing feeling.’

Other participants included friends Polly Maclennan and Amy Trevan, who had only registered for the hike last week.

They had raised £1,000 in record time ahead of Saturday’s hike and spoke of their ‘celebratory moment’ at the summit.

So far, almost £25,000 have been raised by those who took part, which will help fund the incredibly important work the charity does.

Among the hiking team was Metro.co.uk editor Deborah Arthurs and deputy editor Claire Eaton-Rutter, who were joined by reporters and by staff from MailMetroMedia.

Talking about the decision to support the charity as part of this year’s Lifeline campaign, Deborah said: ‘Supporting PAPYRUS was so important, both to me personally and to all of our team at Metro.

‘Suicide is the biggest killer of young people under 35 and mental health is a topic that touches all of us.

‘Talking with people on the walk – including so many who had lost daughters, sons, friends and family members to suicide – really brings home how important it is for us to talk – to share our stories, to have difficult conversations that change lives and inspire each other.’

There’s still time to donate to Papyrus, and you can do so by clicking here.

And to read further stories from the Lifeline Campaign, you can follow this link.

This year sees the return of our brilliant charity campaign: Metro.co.uk Lifeline.

Our aim is simple – to raise as much money as possible for charity with YOUR help.

For 2022 we have chosen to support PAPYRUS Prevention of Young Suicide, a vital organisation that works hard to reduce the number of young people who take their own lives.

As well as sharing their story to help raise awareness, readers, charity supporters and celebrities will also be taking on England’s highest mountain, Scafell Pike, at night on July 2, 2022.

To make a donation, click here or you can do it via text: