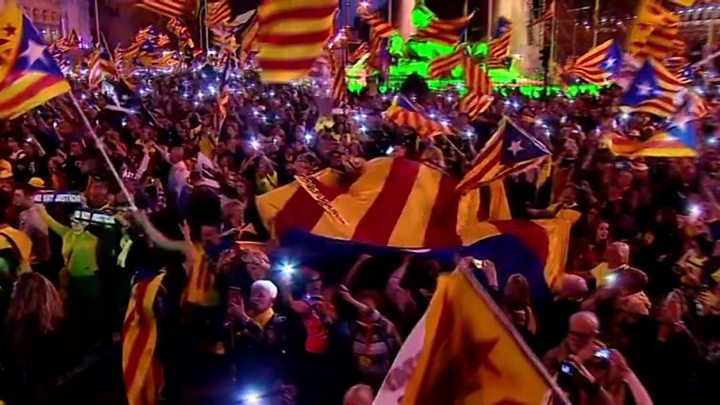 Tens of thousands of supporters of Catalan independence have rallied in Spain’s capital Madrid in protest at an ongoing trial of 12 separatist leaders.

Many waved Catalan flags and had placards reading “Self-determination is not a crime”.

If convicted, some could face up to 25 years in prison.

What was Saturday’s protest?

The rally was organised by more than 60 civil society groups from all over Spain.

Hundreds of buses were laid on to bring demonstrators to Madrid from Catalonia and other regions.

The protesters then marched from the Atocha train station to the Plaza de Cibeles.

There have been no reports of any violence.

What’s the background to this?

The semi-autonomous north-eastern region of Catalonia held an independence referendum on 1 October 2017, and declared its independence from Spain weeks later.

Spain’s 1978 constitution speaks of “the indissoluble unity of the Spanish nation”.

The Catalonia crisis is considered the most serious to hit Spain since the era of fascist dictator Francisco Franco, who died in 1975.

Doctors suspended for removing trans man's vagina without his consent

Coronavirus: 5,700 workers yet to undergo rostered routine testing, not allowed to return to work
We and our partners use cookies on this site to improve our service, perform analytics, personalize advertising, measure advertising performance, and remember website preferences.Ok