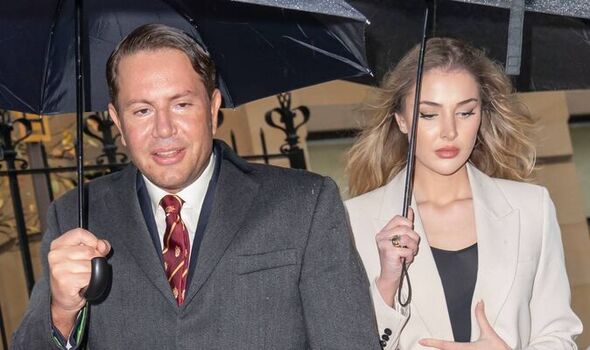 Stunt, who said he used to smoke 50 cigarettes a day, added he has been sober for three years. He claimed he had been the “world’s biggest blackjack player” and would sometimes gamble £5million during a session. The 40-year-old became emotional as he revealed intimate details of his life and marriage to former Formula 1 chief Mr Ecclestone’s daughter Petra.

Leeds Cloth Hall Crown Court heard that money poured into the bank account of gold dealer Fowler Oldfield from 2014 to 2016.

Jurors were told that “criminal cash” from across the UK was taken to its premises in Bradford, West Yorkshire, before the scheme “went national” and Stunt’s London offices also began receiving money.

Prosecutors suggested that Stunt may have become involved when his marriage hit the rocks and the “river of money” from his ex-wife’s family was “running dry”.

Stunt denied being a “kept man” in his marriage to Petra, 33. He told jurors: “I had a very rich wife and I was doing all right myself. I’m not comparing myself to Bernie Ecclestone – he’s one of the richest men in the world.”

Stunt alleged Petra’s family were “very controlling of our marriage” and their three children “had to be born in the UK for tax reasons. It was against mine and Petra’s wishes but that’s the kind of power Bernie had over our marriage.”

Richard Fisher, KC, defending, asked if Stunt had ever sought attention. He said: “I’m not a Kardashian, I’ve never done anything to achieve fame. Wow, I have some money, I married a famous man’s daughter.”

He went on: “That wasn’t what I wanted, I loved my wife, I didn’t love her bank account.”

Stunt broke down when he spoke about his brother Lee who died in 2017 and said he was “here to clear my name and his”.

Jurors heard that Lee had been involved in the management of Stunt and Co – the business allegedly used to collect and count criminal cash.

Stunt said: “He’s not here to defend himself and I have had to listen to lie after lie. I’m very sensitive when it chil comes to my late brother and my children.” He said he was a morphine addict and began cocaine in 2017 as he and his wife separated, Lee died and police raided Fowler Oldfield.

Speaking of his cocaine use, Stunt said: “It was 2017, pretty much every day until 2019.” He said he also had vertigo after gunmen broke into his home and pistol-whipped him in front of his girlfriend Helena Robinson.

Stunt said he was “politely asked to leave” one school: “I couldn’t even pass my math GCSE. I suffer from a condition called dyscalculia. It’s like dyslexia for numbers.” Jurors were told his friends include Sir Elton John and his husband David Furnish.

Stunt, of Belgravia, denies money laundering and forgery. He is on trial with seven others.