Protesters in London have been told by police they must be off the streets by 5pm today.

The restriction is an attempt to avoid a repeat of last week’s violent clashes with police during Black Lives Matter protests.

Statues in Parliament Square have been boarded up to prevent them being targeted, as some were in recent days.

And protesters will have to keep to the planned march route, which runs from Hyde Park to Whitehall.

At Whitehall there will be a police barrier, with protesters asked to stay on one side and counter-protesters on the other.

The conditions have been set under section 12 of the Public Order Act.

Met Police Commander Bas Javid said he understood the depth of feeling of protesters but asked people not to come to London while lockdown rules are still in force.

“If you were planning to come to London, I again would urge you to reconsider, but if you are still intent, please familiarise yourself with what the conditions are,” he said.

“Please keep yourself safe by complying with government guidance on social distancing.” 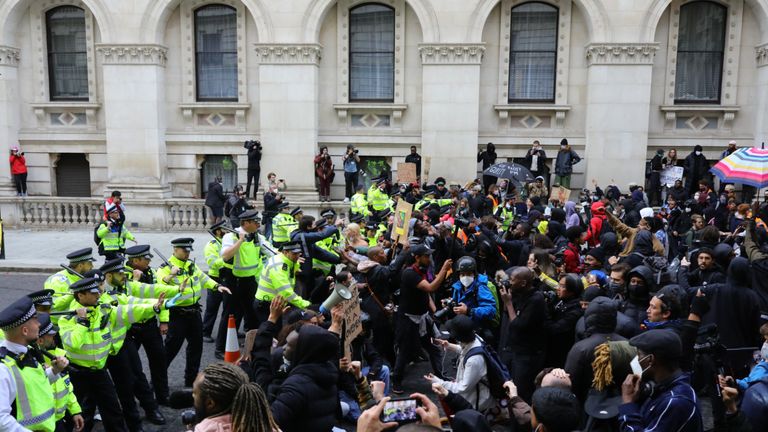 He also promised a “robust” response to any disorder at protests this weekend.

“The reality is it was a very, very small number of people last weekend that resorted to violence.

“But quite naturally that’s what seems to get the traction on social media and in the media.

“A large, large number of people who came to London were peaceful. They demonstrated in a very peaceful and sensible way, under the current circumstances.

“But those who come along with the intention of, or they are able to be drawn into, violence when they come to London, that just won’t be accepted and it won’t be tolerated.”

The protests were sparked by the killing of American George Floyd, a black man who died in Minneapolis last month after a white police officer knelt on his neck for almost nine minutes.

The UK’s National Police Chiefs’ Council said on Friday that more than 130 people have been arrested during almost 200 demonstrations across Britain since the death of Mr Floyd.

More than 60 police officers have also been injured.

Race and Revolution: Is Change Going to Come?

Sky News will broadcast a global debate show on Tuesday night at 8pm – looking at the issues raised by the Black Lives Matter protests, and examining institutional racism and how we fix it.

If you would like to be part of our virtual audience, and have a chance of putting a question to our panel, please send your name, location and question to [email protected]

‘Thank you, sir’ Rapist thanks judge for sending him back to prison to escape free world

Horror film fan accused of dismembering a woman is alleged to have raped a second victim, court told