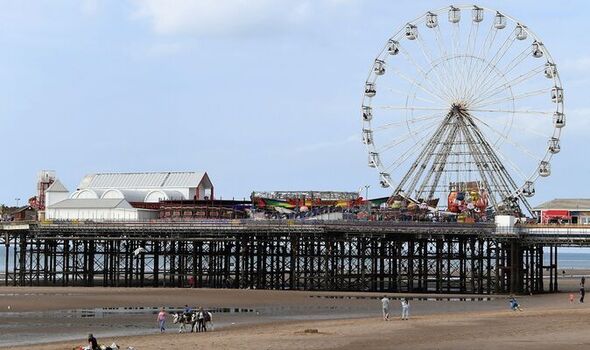 And nine of the top 10 unhealthiest regions are in the Midlands or North, analysis of official data revealed. The hardest-hit local authority area is Blackpool when it comes to health and life prospects.

The resort’s men and women have the lowest life expectancy of any local authority in England, the Office for National Statistics (ONS) figures confirm.

Fitness experts BarBend analysed a range of lifestyle data to uncover the 10 worst regions of England for factors on physical health, mental health and fitness – compared with the national average.

It looked at life expectancy and avoidable mortality data as well as diet and alcohol statistics.

That created a top 10 of unhealthiest regions, with Blackpool unveiled as England’s unhealthiest.

Manchester came second, followed by Hull, Birmingham, Liverpool, Middlesbrough, Nottingham, Bradford and Leicester.The tenth spot went to the only region in the south of England – Barking and Dagenham in London.

According to Blackpool’s Joint Strategic Needs Assessment, using ONS data, “both men and women in Blackpool have the lowest life expectancy from birth of any local authority in England”.

But the gap widens further for those living in the town’s most deprived areas, with life expectancy for men being just 67 years and 73 years for women.

Yesterday’s North/South divide analysis came on the same day Blackpool unveiled a £5million project to investigate why its residents were unhealthier than those elsewhere.

The results will shape services.

Council leader Lynn Williams said: “Blackpool is known for many fabulous things – its world-famous illuminations and beautiful beaches to name but a few.

“Sadly, it is also known for having poor life expectancy and health inequalities and we want to change that.”

Blackpool South MP Scott Benton said: “We rank at the bottom of many socioeconomic measures, including poor health. The Government is providing record amounts of public expenditure on health and education to level up Blackpool.This included one of the largest town fund deals at £39.5million to regenerate parts of the town.”

Online Safety Bill: Social media firms could be fined up to £18m for not protecting users

The Iceman cometh: whipping up a storm at Teddy's