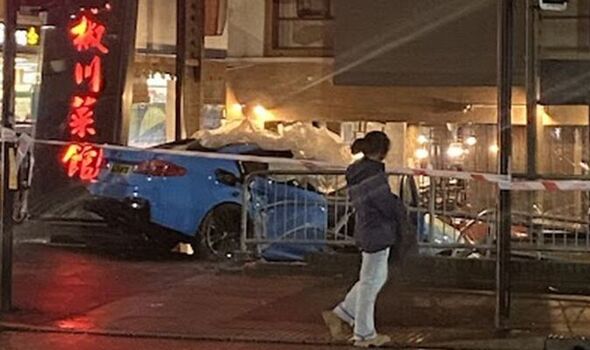 A BMW has crashed into the front of a popular city centre restaurant in Manchester, with three men rescued from the wreckage. The car drove over the pavement and the entrance of the Red Chilli restaurant on Oxford Road at around 9.20pm on Monday. Pictures from the scene show the smashed-up front of the blue BMW in a downwards position over a footpath beside the glass exterior to the building.

Emergency services rushed to the incident and cordoned off the pavement at the junction with Grafton Street after the crash, as well as around the crash scene.

Police were pictured as the scene, with fire crews also there to help extract the car from the destroyed front of the restaurant.

Greater Manchester Fire and Rescue Service said the incident involved one car that had “gone into the front of a commercial property”.

Three men were in the car were led to safety by the fire crew before they were “transferred to the care of colleagues from NWAS” (North West Ambulance Service).

Firefighters were in attendance for around 40 minutes after ensuring the scene of the crash was safe.

A Greater Manchester Fire and Rescue Service spokesperson said: “At approximately 9.20pm on Tuesday 1st November firefighters were called to reports of a road traffic collision on Oxford Road, in Manchester.

“Fire engines from Moss Side and Gorton stations quickly attended the scene.

“The incident involved one car which had gone into the front of a commercial property.

“Three men were led to safety from the vehicle by fire crews, before they were transferred to the care of colleagues from NWAS.

“Firefighters worked to make the scene safe and were in attendance for around 40 minutes.”

“It is believed it was involving a vehicle which subsequently caused damage to a building. The extent of the injuries suffered are not yet known after emergency services attended the scene. An investigation is still ongoing at this time to understand the full circumstances.”

The latest statistics from the Department for Transport show there were an estimated 128,209 casualties of all severities on Britain’s in 2021, a decrease of 16 percent compared to 2019.

There were 425 casualties per billion vehicle miles, a lower rate compared with 2019.

Overall, were an estimated 1,558 reported road deaths in the UK in 2021 – a fall of 11 percent from the levels before the Covid pandemic.

There were around 27,450 killed or seriously injured (KSI) casualties in 2021, down by 11 percent from two years earlier – with a casualty rate of 91 KSIs per billion vehicle miles.