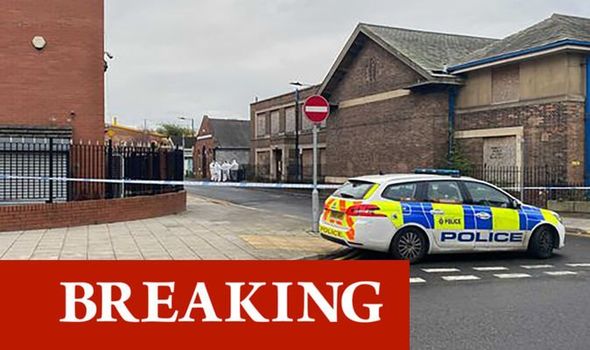 Police were called to a street in Doncaster, South Yorkshire, this morning after the 18-year-old man was discovered. The investigation has reportedly centred around wasteland and an abandoned building off Catherine Street in the town centre.

Photos published by Yorkshire Live show forensic officers at the scene and a large section of the road cordoned off.

A reporter at the scene says there are currently around five police vehicles in attendance.

Writing on Twitter, South Yorkshire Police said: “Police are in attendance at College Road, Doncaster, after the body of an 18-year-old man was found on wasteland this morning. Enquiries are ongoing.

Superintendent Neil Thomas, of the constabulary, said: “We would urge members of the public to stay away from the area while officers continue their work.”

Due to road closures for the investigation, traffic is busy through the town centre.

The A638 in both directions is particularly congested and drivers are advised to use the A18 and A630 instead to get through Doncaster.

Members of the public are being urged to avoid the area as enquiries continue.

No further details about the teenager, such as where he is believed to be from, have been disclosed.

There is a large shopping centre just off the road.

Elsewhere in the UK, a 17-year-old boy was rushed to hospital with serious injuries after an alleged stabbing in Newcastle city centre. Police shut off Quayside at around 3am and have remained on the scene throughout today.

This is a breaking news story and we will bring you all the latest details as it develops at express.co.uk. You can also find the latest headlines from around the UK on Facebook or Twitter.