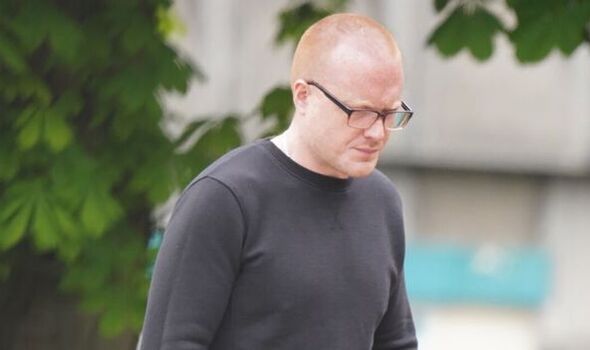 A “bodybuilder” strangled a dog in the back of a police car and then attacked an officer after it was wrestled from him.

Michael McCormack, 33, will be sentenced for causing unnecessary suffering to a protected animal and assault of an emergency worker at a later date after a court heard he became “abusive” and “aggressive” in the van.

McCormack threatened to sexually assault the animal, one of the officers said, before he throttled it with its lead, causing it to growl as it “struggled to breathe.”

He then became involved in a “struggle” with the two officers escorting him whilst traveling down a busy dual carriageway, after they had taken the dog away from him for its own safety.

They were forced to stop the car and use incapacitant spray to restrain him as they called for backup. A warrant has now been issued for his arrest after he failed to attend his trial and was convicted in his absence, reports Manchester Evening News.

The incident happened in August 2020 after McCormack was being driven to a family member’s house by officers with the animal.

Stockport Magistrates Court heard yesterday McCormack had pleaded not guilty to causing unnecessary suffering to a protected animal and assault of an emergency worker at a previous hearing.

But he was convicted following a trial in his absence.

Chairman of the bench Michael Dunstan heard PC Jackson from Cheshire Police and PC Martyn Stone, who is no longer a police officer, offered to drive McCormack to his sister’s address in south Manchester and he brought the dog, whose age and breed was not disclosed in court, into the police car with him. He sat it on the back seat next to him with the two officers in the front.

Giving evidence, PC Jackson said McCormack was initially “meek and mild” and was “very apologetic” about what had happened. However he said as they made their way down the A34 heading towards Didsbury, Manchester, he “became more and more aggressive” and was “talking nonsense.” His words were “indiscernible” and the dog also became “agitated” and was “growling”, he said.

As he looked back, PC Jackson, who was in the front passenger seat, said he saw McCormack “dragging the dog about” and “applying pressure to its neck”, initially with the lead but then also with his hands.

“He was making the dog suffer somewhat,” he said. “It was growling. It was clearly struggling to breathe.” PC Jackson said he wrestled the dog from McCormack and put it in the front passenger footwell as a struggle ensued with him.

“He was trying to get into the front of the vehicle,” he said. “He made threats. He was much bigger than I was. He was a bodybuilder. I was trying to hold him in his seat but it was a struggle.”

Mr Stone, the victim of the assault, said during the journey McCormack “became verbally abusive to the dog he had with him.”

He said he was “making comments to the dog that he wanted to sexually assault the dog.” He then said he could hear the dog “growling” and acting “as if it was struggling to breathe.”

“It seemed in distress,” he added.

After the dog was taken from him, McCormack became “very, very aggressive” he said. He said he was “hitting me and pushing me on my shoulder” as he drove the police car near the Gatley crossroads on the A34, close to the junction with the M60.

He said he was forced to stop the car, get out and use his incapacitant spray in order to handcuff him after they had pressed their emergency button and called for help from other patrols.

“I’m not a medical expert but from my experience, it appeared he was under the influence of some kind of drug but I couldn’t say what,” Mr Stone said.

A warrant not backed for bail was issued so that the defendant, from Congleton, Cheshire, can be brought to court to be sentenced.

Pressure for council chief to go over golly display