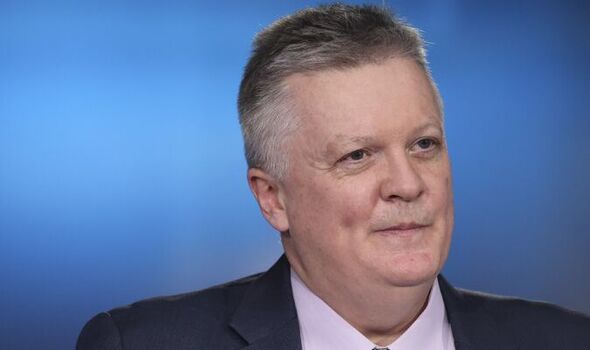 A member of the Bank of England’s rate-setting Monetary Policy Committee has taken a veiled swipe at Liz Truss’s Government. Huw Pill, speaking at a conference organised by the Office for National Statistics (ONS), hailed the importance of respect between UK institutions.

Mr Pill, Chief Economist at the Bank of England and a member of the Monetary Policy Committee, said: “The past year has been a challenging one for monetary policy.

“As a result it has proved a baptism of fire for me in this MPC role. But in the midst of all these dramatic energy price rises, the impact of Omicron variants, labour supply shocks and all those other things… one very bright and very positive experience over the past year has been the cooperative and constructive interaction between the Bank and the ONS.”

He continued: “In my view, that interaction between the Bank and the ONS is both open, informative, even if on occasion challenging, yet at the same time it’s respectful of the different responsibilities and institutional independence of the two bodies involved. And that’s a model for how macro policy-makers in the UK should respect the institutional framework when they interact with one another.

“In my view, we might have benefitted, in recent weeks, if the interactions amongst other institutions had followed that pattern.”

Mr Pill did not outline exactly which institutions’ interactions might have benefitted, but his comments came after former Chancellor Kwasi Kwarteng’s mini-budget statement which lacked the usual accompanying Office for Budget Responsibility (OBR) forecasts. The move sent British financial markets into turmoil.

Deputy Governor of the Bank, Sir Jon Cunliffe, earlier told MPs the Government did not fully brief the Bank on its mini-budget and sweeping tax-cutting plans before it was unveiled.

Subsequent concerns over large borrowing required for the mini-budget accelerated a sell-off in the bond market and a slump in the pound to a record low against the dollar. The financial turmoil led to the appointment as Chancellor of Jeremy Hunt, who has outlined plans to reverse many policy decisions from the mini-budget.

BoE policymaker Jonathan Haskel said in September the central bank was in a difficult position as the the Truss Government’s expansionary fiscal policy appeared to place it at odds with the bank’s efforts to cool inflation.

The MPC is due to meet next month with much having happened since the last meeting on September 22 before Liz Truss’s Government announced its growth plan, which upset financial markets, sent UK Government bond rates upwards and led to falls in the value of the pound.

The biggest jump in food prices since 1980 pushed UK inflation back into double digits in September, matching a 40-year high hit in July in a new blow for households grappling with the cost-of-living crisis.

The consumer price index (CPI) increased by 10.1 percent in annual terms in September, according to the ONS.

Ms Truss stressed the need to be “bold” as she made her final speech as Prime Minister before power is handed over to new Tory leader Rishi Sunak.

After seven chaotic weeks as Prime Minister, Ms Truss today (October 25) praised tax cuts and celebrated reversing the national insurance hike imposed by Mr Sunak when he was chancellor. She warned the nation continues to “battle through a storm” but insisted she believes “brighter days lie ahead”.

She then travelled to Buckingham Palace to formally tender her resignation to the King after just 49 days in office, making her the shortest-serving Prime Minister in history.

Speaking from Downing Street, Ms Truss said: “From my time as Prime Minister I’m more convinced than ever that we need to be bold and confront the challenges we face.

“We simply cannot afford to be a low-growth country where the Government takes up an increasing share of our national wealth and where there are huge divides between different parts of our country. We need to take advantage of our Brexit freedoms to do things differently.”

Ms Truss made no apologies for the disastrous mini-budget which sparked financial turmoil and led to the chaotic end of her premiership.

Meanwhile, prices of the cheapest vegetable oils and pasta in UK supermarkets have soared by nearly two-thirds in the last year, new data from the ONS says. Statisticians say the cost of the lowest-priced vegetable oil spiked 65 percent and the cheapest pasta was now 60 percent more expensive than a year ago.

The price of the cheapest tea had risen by 46 percent, chips were up 39 percent, bread rose by 38 percent and biscuits were up 34 percent.

National statistician Sir Ian Diamond said: “While the recent spike in inflation began with energy prices, today’s fresh insights using a new innovative data source show they are now filtering through to other important items, with the cheapest price of some staple food items rising by around two-thirds in the last year.”

The data shows the rate at which prices of lowest cost items in supermarkets is going up is in line with the overall food shop and non-alcoholic beverages, a rise of about 15 to 17 percent.

Sir Ian told the BBC: “People who buy the lowest cost goods, there isn’t any further to go down so they can be impacted quite a lot. What we are seeing is the price of low cost goods is going up at the same rate as food across the piece. Very, very few things [are] going down at all. The only two things we’ve got [showing] reductions year on year are orange juice and minced beef.

“We are really seeing that the squeeze on people who buy the lowest cost thing is pretty hard at the moment.”

The ONS also published separate data showing 72 percent of people with prepayment energy meters are finding it difficult to pay their bills.

A survey also found that seven in 10 (69 percent) of black adults are finding it difficult to afford their energy bills, compared to just 44 percent of white adults. The survey showed that 59 percent of Asian adults were struggling with energy bills.

Sir Ian said: “Figures from our near real-time survey of people show that while rises in food and energy costs are affecting many people across the country, those who are disabled, from certain ethnic minority backgrounds and renters are among those struggling the most.”

Rachel Bull, Head of Policy and Research at the Trussell Trust, told Express.co.uk: “Across the UK people are struggling with the impact of inflation on the soaring cost of living, but there is no doubt that people on the lowest incomes are facing the toughest challenges.”

“For the first time food banks are telling us that need for emergency food is outstripping donations for food parcels as the cost of living crisis leads to a drastic increase in the number of people forced to turn to charity for support.

“In August and September 2022 food banks in the Trussell Trust network distributed 46 percent more emergency food parcels than the same period in the previous year. Food banks are preparing for the busiest and toughest winter yet as they expect to distribute more than 1.3 million emergency food parcels over the next six months – more than half a million of these parcels will be for children.

“We know it doesn’t have to be this way. The UK Government has shown that the right support, at the right time, can help people out of hardship. That’s why we’re urgently calling on them to do what’s right and provide a package of support directly targeted at people on the lowest income to support them through this challenging time.

“Beyond this, we want to see a long term commitment benefit rates will always be enough to afford the essentials.”

‘Not too late!’ How Gerry McCann made heartbreaking plea to Maddie’s abductor

Wetherspoons left customers 'shooting from both ends' in diarrhoea outbreak