The security alert has rocked Dungiven in County Derry, Northern Ireland, part of a country blighted by scenes of violence recently. Arlene Foster, First Minister of Northern Ireland, has condemned the attack.

She said: “To the Republicans who sought to murder this young murder, your campaign is futile, you will never succeed.

“I have spoken to the police officer who was targeted by terrorists last night in County Londonderry. I wanted to convey our support and utter condemnation of those who sought to harm her & her family. Reckless and futile. We salute her bravery and long service to our community.

“There will be political disagreements, but Northern Ireland must keep moving forward. We will not be dragged back to bombs and bullets.”

People have been asked to avoid Dungiven, reports Belfast Live. 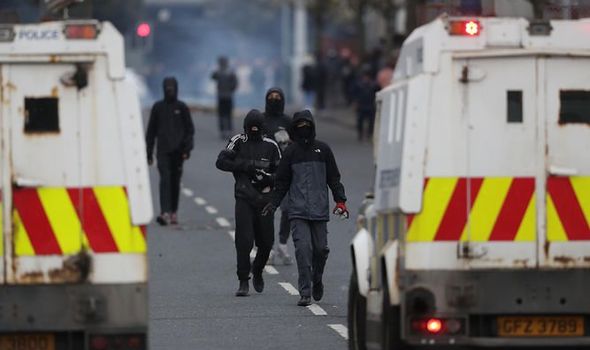 To the Republicans who sought to murder this young murder, your campaign is futile, you will never succeed

Cara Hunter, MLA for the East Londonderry constituency, said no one should “live in fear”.

“I fully condemn the attack of a serving police officer in Dungiven yesterday with a device left on their car,” she added.

“No one should have to live in fear of going to work.

“Our officers protect our communities everyday and keep them safe.

“My thoughts are with the officer and their families.”

Police say the targeted employee is a part-time officer, who is now receiving support.

The attempted attack happened on a rural road between Dungiven and Limavady on Monday. It remains closed as officers investigate.

Loyalists and nationalists have clashed with police in Northern Ireland recently, with Brexit, police failings and a controversial Sinn Féin funeral all taking blame for the conflict.

People in 30s could receive Covid jab invites 'within days'