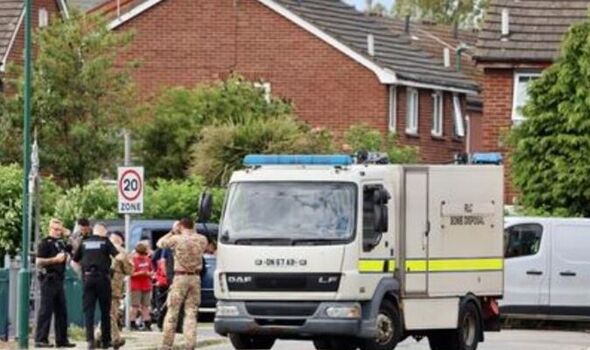 Victoria Street in South Bank has been cordoned off following reports of a “suspicious package”.

Police vehicles are present at the scene guarding the cordon.

Officers said they arrived at the property around 3.10pm and have taped the area off.

A police spokesperson said: “A cordon is in place as a precautionary measure and officers will remain at the scene until satisfied that people can go on their way safely.

“We would ask members of the public to avoid the area if possible whilst emergency services work to bring the incident to a safe conclusion as quickly as possible.”

One resident told Teesside Live: “I came back at four and there was police all over, blocking the street.

“Just said it was for our own safety.”

The resident added they were not told the package was a bomb.

Police were called to the scene after recieving reports of a suspicious package at around 3.10pm today.

Bomb disposal experts arrived on the scene around 4.50pm.

The cordon is close to an earlier police cordon put in place in May due to a similar report of a suspicious package.

As a precautionary measure, road closures were in place along Park Lane towards Abingdon Road junction with Victoria Road and Waterloo Road.

Bomb disposal experts arrived at the scene at 5pm, and all roads reopened an hour later. An eyewitness from the scene said the army entered a property with what he described as a “specialist X-ray camera”.

Another eyewitness, who was evacuated, told TeessideLive: “We were told to leave for our safety.” She added one male officer entertained children while they were waiting to get back inside the house.

According to a person at the scene, three workmen doing building work on a house found an item which prompted them to call police.

A spokeswoman for Cleveland Police had said: “Police received a call around 2:15pm today to report a suspicious package found in an empty property on Abingdon Road, Middlesbrough.

“As a precautionary measure and whilst emergency services and colleagues from the EOD assess the situation, some residents on Abingdon Road and some nearby properties have been evacuated.

The force later confirmed that the item was examined by explosives experts and found to be a broken power bank.

Assad Forces Surge Forward in Syria as U.S. Pulls Back