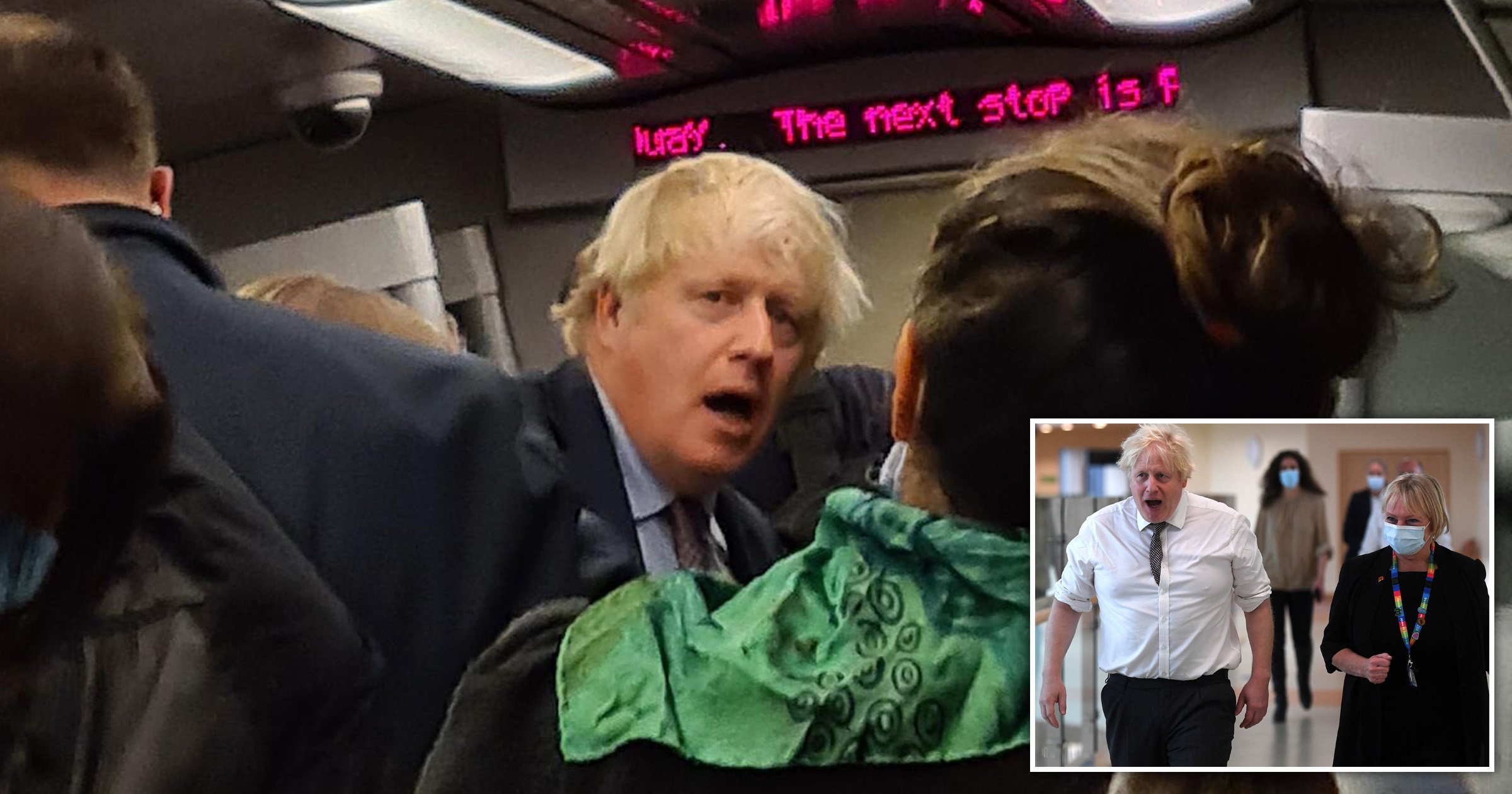 ‘Shocking and selfish’ Boris Johnson has been caught defying his government’s own advice by not wearing a mask on a crowded train again — just one day after he apologised for not covering his face during a hospital visit.

The prime minister was seen talking to passengers on a packed Manchester to Warrington service on Thursday afternoon.

On Wednesday — reacting to pictures of him greeting hospital staff while unmasked — he had insisted: ‘I wear a mask wherever the rules say I should, and I urge everyone else to do the same.’

He had also been snapped maskless on a train to Glasgow for the Cop26 climate summit, where — again without a face covering — he sat next to 95-year-old Sir David Attenborough.

But he insisted: ‘People will actually have seen me wearing face coverings quite a bit more regularly recently.

‘I think that’s the responsible thing to do and I’m going to continue to do it.’

As 40,004 new cases and 61 deaths with Covid were recorded yesterday, his actions were compared with past government ‘elitism’ — such as ex-aide Dominic Cummings flouting lockdown to go to Barnard Castle in April 2020.

She said wearing a mask was ‘a small thing we can each to do to keep other people safer and we should be doing it’.

While masks are no longer a legal requirement in England, train operators still urge passengers to wear them.

Mr Johnson’s government’s guidance states they should be put on ‘in crowded and enclosed areas where you come into contact with people you do not usually meet’.

Dr Deepti Gurdasani, of Queen Mary University of London, called it ‘seriously shocking’ and another example of government ‘exceptionalism’ to the rules, which would encourage the public to ignore guidance.

‘It also highlights a degree of selfishness and lack of regard for others,’ she said. ‘By doing this, they put others — especially those who are most vulnerable — at risk. Many of them have no choice but to use public transport.’

Mick Lynch, of the RMT union, added: ‘The PM is once again sending out all the wrong signals as we stand on the brink of another Covid surge. Johnson should be setting a better example than this.’

When, where and why you should wear a mask

Wearing a face covering remains law in some settings, such as public transport in Wales, Northern Ireland and Scotland — but England’s rules are looser.

Transport for London has made them a condition of carriage — a non-legal rule — on trains and buses, while most rail operators simply urge or advise passengers to do so.

Senior health experts have urged people to wear face coverings to help reduce the threat of Covid and stave off future lockdowns.

Days before ‘Freedom Day’, England’s chief medical officer Prof Chris Whitty said he believed there were three scenarios when they should still be put on.

‘The first is in any situation indoors and crowded or indoors with close proximity to other people,’ he said.

‘That is because masks help protect other people. The second situation is if I was required to by any competent authority. The third is if someone else was uncomfortable if I did not wear a mask, as a point of common courtesy.’

Chief scientific adviser Sir Patrick Vallance agreed, adding: ‘Masks are most effective at preventing somebody else catching the disease from you, and they have some effect to prevent you catching it.’

Fellow passengers on the train said they were ‘shocked’ when they saw Mr Johnson on Thursday.

One told the Sunday Mirror: ‘I got on to the carriage and half was taped off. A large group boarded the blocked-off side, under guarded supervision.

‘There were people surrounding the PM and a few of his people were noticeably not wearing a mask — unlike the rest of the passengers.’

There are fears people are increasingly giving up on the safety measure.

Network Rail estimated around 80% of passengers in England kept wearing masks in July after the rules changed. In September, it put the figure as low as 20%.

Researchers at Edinburgh and Australia’s Monash universities analysed more than 30 studies globally and found a ‘statistically significant’ 53% fall in Covid infections with mask wearing and 25% fall through distancing.

Mr Johnson, who almost died from Covid in April 2020, reportedly had a cough and cold last week.

Last night, Downing Street — after nearly a dozen calls from Metro during the day — finally said: ‘No comment.’