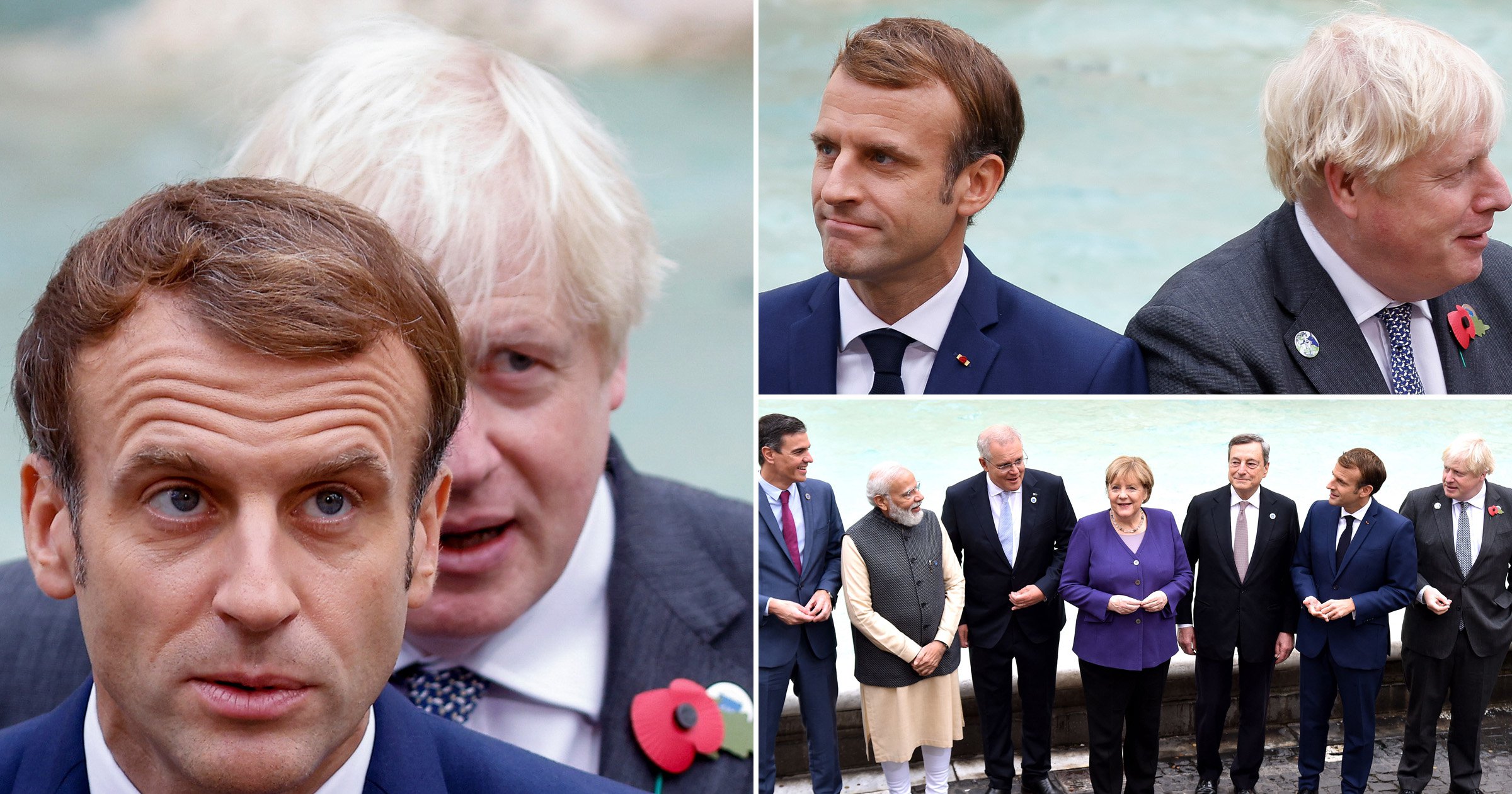 Boris Johnson and Emmanuel Macron have posed for an awkward photo together as a row over fishing rights turns increasingly ugly.

The two leaders lined up alongside other politicians in front of Rome’s iconic Trevi Fountain – with the French President muscling in to get a better spot in the line-up.

They exchanged a few words as they posed for photos in front of the world’s media before throwing coins into the water, in line with tradition.

Legend has it that anyone who throws a coin into the fountain – which has been the backdrop for many films including La Dolce Vita – will return to the Eternal City.

Both Mr Johnson and Mr Macron have not minced their words in the row over post-Brexit fishing permits.

There are just two days left until the French-imposed deadline to reach a deal or the country’s authorities will bar UK fishing boats from some ports and tighten customs checks on lorries entering the country with British goods.

They want more licences to be granted for small boats to fish in British waters.

Brexit minister Lord Frost has said the UK is ‘actively considering’ triggering legal proceedings if France follows through with the threats.

He’s warned Brussels that the restrictions would put the entire bloc in breach of the post-Brexit free trade deal terms.

The row has dominated discussions at the G20 in Rome this weekend and may overshadow the Cop26 climate summit as well.

World leaders will decamp from Italy to Glasgow after today to begin discussions on how exactly they plan to limit warming to below 1.5C.

Mr Johnson has said the summit will be the ‘world’s moment of truth’, as he urged leaders to make progress on reaching the planet-saving target.

Downing Street said Cop26 will be one of the biggest events the UK has ever hosted, with 25,000 delegates expected from 196 countries and the European Union.

But Alok Sharma, the Conservative Party politician who has been made president of the event, has conceded it’s going to be a ‘tough ask’ to reach a deal as he faced accusations of hypocrisy from young activists.

He’s been criticised for the Government’s support for a new oil field in Scotland, despite pledges to cut emissions from fossil fuels.

Appearing at a youth conference on the eve of the summit in Glasgow, hecklers stood up and disrupted Mr Sharma’s speech before staging a walk out.

The young delegates led chants from the crowd before one read out a statement.

She said: ‘Alok Sharma and the UK Government are hypocrites. They are opening the new Cambo oil field, they subsidise billions into fossil fuels yet won’t look after the workers who need a just transition.

‘Where is the support for countries in crisis as a result of our colonial history?’

The Government is reportedly planning to green light the controversial plans to extract oil at Cambo in the North Sea, to the west of the Shetland Islands.

It’s after the chancellor Rishi Sunak announced a series of measures, including cutting taxes for domestic flights, which green groups said made a mockery of the talks.

Mr Johnson, who is due to fly from the G20 to Glasgow on Sunday evening, has rated the chance of of success in Scotland as ‘no more than six out of 10.’

He said: ‘Cop26 will be the world’s moment of truth. The question everyone is asking is whether we seize this moment or let it slip away.

‘I hope world leaders will hear them and come to Glasgow ready to answer them with decisive action.

‘Together, we can mark the beginning of the end of climate change – and end the uncertainty once and for all.’