But the commitment comes amid increasing tensions over defence spending, which the Prime Minister said stood at 2.3 per cent of GDP. Britain’s latest wave of funding for Ukraine takes the total military and economic support to £3.8billion this year. Mr Johnson said: “Vladimir Putin’s brutality continues to take Ukrainian lives and threaten peace and security across Europe.

“As Putin fails to make the gains he had anticipated and hoped for and the futility of this war becomes clear to all, his attacks against the Ukrainian people are increasingly barbaric.

“UK weapons, equipment and training are transforming Ukraine’s defences against this onslaught. And we will continue to stand squarely behind the Ukrainian people to ensure Putin fails.”

Mr Johnson said what Putin has done “is evil” and added: “It’s been an appalling act of unwarranted aggression against the innocent population.”

Defence Secretary Ben Wallace, who warned that the British military had been forced to survive for too long on “a diet of smoke and mirrors”, yesterday said UK spending levels were not enough.

He said: “To be fair, No10 does say, ‘If you include the extra Ukrainian spend’, they have put a sort of caveat to that. Because, of course, it isn’t core defence spending.

“I mean, it is not my core budget, it doesn’t buy me any more planes, tanks or ships. It is sort of obliquely helping Britain’s defence because we’re helping Ukraine.” 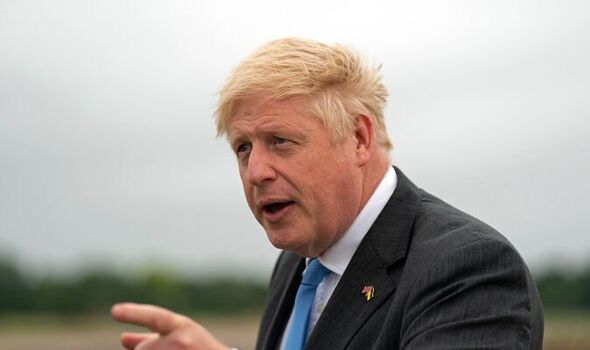 But Mr Johnson said: “We’re investing massively in our defences. What I want to see is an Army, Navy, Air Force that is strong, sufficiently numerous. But also has the kit, the training that they need.”

The PM has dismissed calls by the head of the Army to reverse a cut to troop numbers. General Sir Patrick Sanders, who only took over as Chief of the General Staff this month, said it would be “perverse” to axe nearly 10,000 military personnel while Russia is invading Ukraine.

Mr Johnson’s spokesman said: “The PM is of the view that we need to have the right size of force for the UK to both defend itself and to continue to play its leading role in the world.

Meanwhile, the PM spoke with world leaders, including American President Joe Biden, at the Nato summit in Madrid yesterday.