More than 530 migrants have made the trip in flimsy dinghies since the start of the year – on Friday and Saturday 100 got to the South coast. But the Prime Minister declared yesterday: “It is outrageous that the gangsters, the people smugglers, these thugs, are still putting people’s lives at risks…taking money to help people cross the Channel in unseaworthy vessels. “What we are going to do is to ruthlessly stiffen the sentences for anybody who is involved in this.”

Mr Johnson, speaking during a visit to Stoke-on-Trent, said that UK officials were “working with the French auth­orities and ­others to stop the trade”. The crackdown is being masterminded by Home Secretary Priti Patel.

Children wrapped in winter coats were seen being taken ashore on the Kent coast at the weekend after they were rescued from the world’s busiest shipping lanes.

The numbers of migrants found to be making the dangerous trip this year are almost double the figures for the same period in 2020, when at least 286 people reached the UK. The current maximum sentence for ­people smuggling is 14 years in jail but Ms Patel is reported to be concerned that the average sentence actually handed down is three years.

The Home Office said that ­ministers would set out further details about the possible life sentences ­for human trafficking “in the ­coming weeks”.

A spokesman added: “While criminal gangs continue to put lives at risk it is right we consider every option to stop their exploitation of people.” 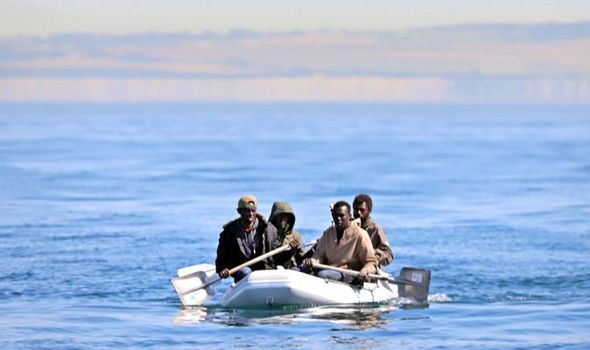 At least 87 people were brought to Britain from France aboard inadequate small boats last Saturday – the second highest total for any day this year.

Among those spotted being helped ashore at Dover was a person in a wheelchair plus several children.

They were met by border force ­officials in high-vis jackets and PPE.

Migrants made an increased number of crossings in boats last year.

The trend for open-sea trips is in part being put down to extra Covid lockdown checks introduced last March that have made it more ­difficult for traffickers to hide the ­vulnerable groups inside lorries.

Coronavirus: Pfizer COVID-19 vaccine found to be 90% effective in ‘great day for science and humanity’