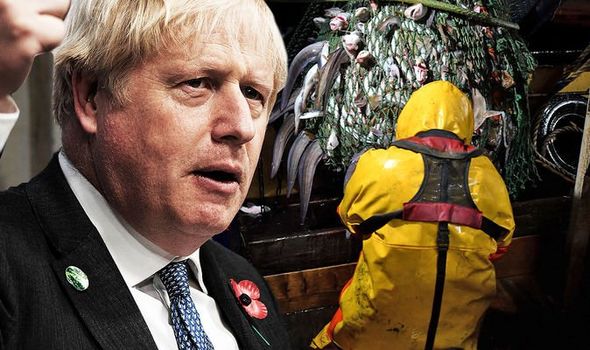 As the fishing row with France erupts, the Prime Minister has been warned that current fisheries legislation do not go far enough. Oceana, an NGO established for ocean conservation, told the Express that there was “no strong evidence” that the UK fisheries were becoming more sustainable, and called on the Government to do more to end overfishing with its post-Brexit powers.

“The UK could use its additional powers over shared stocks since Brexit to create a step change, to end overfishing and we call on them to do so, but we see no sign of that yet.”

Meanwhile, some conservation objectives in the main piece of legislation passed by the Government concerning the UK fishing industry – the Fisheries Act 2020 – were “not ambitious enough and are even one step behind the EU Common Fisheries Policy”.

One such policy was the EU’s commitment to recover and maintain fish stocks above maximum sustainable yield level.

Oceana did however praise the Act for setting objectives that are “totally absent” in EU legislation, such as the climate change objective.

Since leaving the EU, the UK has been able to set its own sustainable fishing targets.

In 2020, Parliament passed the Fisheries Act, which called for fishing to be “environmentally sustainable in the long term” and “such that fleets are economically viable but do not overexploit marine stocks.”

The law also calls for UK fishing activities to “adapt to climate change”.

When the UK left the EU, it was no longer bound by the EU’s objective on maintaining fish stocks.

Oceana noted in an audit earlier this year that “there are concerns that the sustainability objectives are more flexible than those required by [the EU].”

To its credit, the UK Government had been able to convince the EU to set catch limits on several fish stocks, including Norway pout and sandeel, which Oceana described as “a step in the right direction”.

“These species are key for the marine ecosystem as they are the prey of other commercial fish species and marine wildlife such as seabirds and marine mammals.”

According to the fisheries audit, on average around 27 percent of EU catches in the north-east Atlantic were also taken from UK waters between 2012 and 2016.

“In fact, EU vessels landed more fish from UK waters than the UK fleet, although the UK fleet’s landings had higher value,” the report noted.

Of the 104 UK stocks Oceana audited, of which 82 were shared mainly with the EU, 35.6 percent were of a healthy size. Just over 20 percent of UK stocks were “in a critical condition”.

Prior to leaving the EU, Oceana found that 37.5 percent of audited stocks were sustainably fished. However, 28.8 percent were being overfished.

Oceana explained that this did not necessarily mean that Brexit would improve sustainability, and added that “there is no strong evidence to confirm that the UK was becoming more sustainable.”

While a member of the EU, the UK had been the “worst EU member state” for fishing above catch limits set by scientists, dropping to third worst in 2020.

Even after Brexit, Oceana said, “similar mistakes are happening.”

Laying down the gauntlet to the Government, it added: “The UK has stated its commitment to becoming a ‘world leader’ in ‘gold standard fisheries management’ following its departure from the EU.

“It is vital the Government deliver on this claim through the adoption of progressive legislations and their effective implementation.”

A Department for Environment, Food and Rural Affairs spokesperson said: “As an independent coastal state, we want our fisheries managed in a way that protects our marine and coastal areas, while supporting our seafood sector and coastal communities.

“The Government is committed to sustainable fishing, and our flagship Fisheries Act enshrines that commitment in law.

“The Act introduces the concept of Fisheries Management Plans – legally binding plans for sustainable fish stocks. Outside of the EU we have the opportunity to ensure a fairer share of opportunities for the whole of the UK industry.”