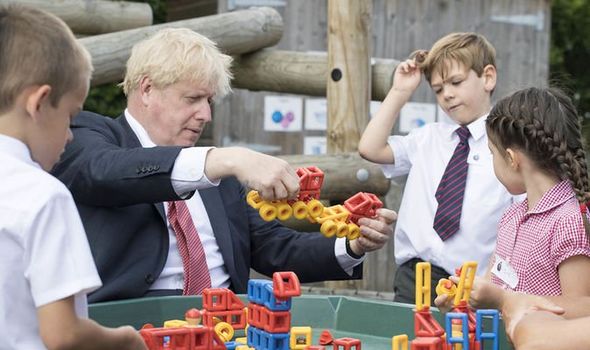 In a message to parents, he says it is “vitally important” for children’s “life chances” to get them into schools and points out that the risk of catching coronavirus is “very small”. But his determination to reopen all schools in England at the beginning of September put him at odds with the country’s largest teaching union last night. A senior figure in the National Education Union called for preparations for classroom rotas and “limited opening” of schools while branding the Government plans “negligent in the extreme.”

In his message to pupils, the Prime Minister said: “I have previously spoken about the moral duty to reopen schools to all pupils safely, and I would like to thank the school staff who have spent the summer months making classrooms Covid-secure in preparation for a full return in September.

“We have always been guided by our scientific and medical experts, and we now know far more about coronavirus than we did earlier this year.

“As the Chief Medical Officer has said, the risk of contracting COVID-19 in school is very small and it is far more damaging for a child’s development and their health and wellbeing to be away from school any longer.

“This is why it’s vitally important that we get our children back into the classroom to learn and to be with their friends.

“Nothing will have a greater effect on the life chances of our children than returning to school.”

The statement said “very few, if any” children and teenagers would come to long-term harm from the virus solely by attending school, while the harm from not returning to school was a “certainty”.

Mr Johnson is understood to have told allies that “failure to reopen schools is not an option.”

Education Secretary Gavin Williamson, under fire following the U-turn over exam grading, is believed to have been told ensuring the reopening of all schools in England is his last chance to save his Cabinet job.

But the National Education Union yesterday said the Government needed a “Plan B” including partial school closures in case of fresh coronavirus surges.

Kevin Courtney, the joint general secretary of the National Education Union, said: “We believe the Government is negligent in the extreme.

“Schools and colleges need to know what should happen if an outbreak of the virus occurs in individual schools or more widely with either national, regional or local spikes.

“Government advice needs to cover the possible self-isolation of bubbles and, in extremis, moving to rotas or to more limited opening.

“It needs to cover advice to heads about the protections needed for staff in high risk categories if infection rates rise.

“The Government should be employing more teachers and seeking extra teaching spaces to allow education to continue in a Covid secure manner if infections rise.”

Mr Courtney said that the union agreed with the Chief Medical Officer “about the benefits a return to full time education will have for children and young people’s education and well being.”

But he added: “School staff, parents and pupils are being sorely let down by Government because of a lack of a Plan B and of ensuring robust track trace and test is in place throughout the country.”

In a fresh move to reboot the education system, ministers yesterday released £9million from the Government’s £1billion education “catch fund” to help boost the English language skills of the youngest primary school children.

The cash will be made available for training and resources to help schools deliver one-to-one and small-group support for five-year-olds in reception classes whose speaking ability may have suffered as a result of the pandemic.

The Investment is part of the National Tutoring Programme, a key plank of the Government’s £1billion Covid catch-up package announced in June.

Children’s Minister Vicky Ford said: “Nurseries and other early years settings have played a huge part in keeping our youngest children safe and supported throughout the pandemic, but too many children have missed out on education at a crucial point in their development.

“Ahead of every pupil returning to the classroom full-time in September, we’re increasing the support available to get them back on track and ready to learn.

“We cannot afford for our youngest children to lose out, which is why this package of support is focused on improving early language skills for the Reception children who need it most, and especially those whose long-term outcomes who have been affected by time out of education.”

The programme being announced today – known as the Nuffield Early Language Intervention – will build on work to improve the home learning environment in the years before a child begins Reception and raise the quality of early years education.

Department for Education officials also confirmed around £23million from the Treasury for nursery schools for the summer term 2021 to enable local authorities to provide them with stability while the Department confirms a long-term solution.

In their joint statement the chief and deputy chief medical officers of England, Scotland, Wales and Northern Ireland said there were “no risk-free options” but school attendance was very important.

COVID-19 deaths in children and teenagers were “extremely rare” and almost all deaths were in children with significant pre-existing health conditions, they added.

The chief and deputy medical officers said that while transmission in schools does occur on current evidence it was not a “common route of transmission”.

They said that teachers were not at an increased risk of dying from coronavirus compared to the general working-age population and that data from UK and international studies suggested transmission in schools may be largely staff to staff instead of pupils to staff.

They added: “This reinforces the need to maintain social distancing and good infection control inside and outside classroom settings, particularly between staff members and between older children and adults.”

The chief and deputy chief medical officers said that reopening schools has not been usually followed by a surge in COVID-19 transmission but it could push the reproduction rate – the so-called R rate – above one.

If this happened it will require “local action and could mean societal choices” of imposing limitations on different parts of the community, they add.

They said: “Early identification and quickly managing outbreaks of COVID-19 in schools is essential as part of a local response to COVID-19.

“Clear advice for pupils and staff not to attend school with symptoms, and prompt availability of testing, appropriate isolation advice, and careful public health surveillance and monitoring of educational establishments are key to support the safe return to schools.”

How hot is your climate change knowledge?