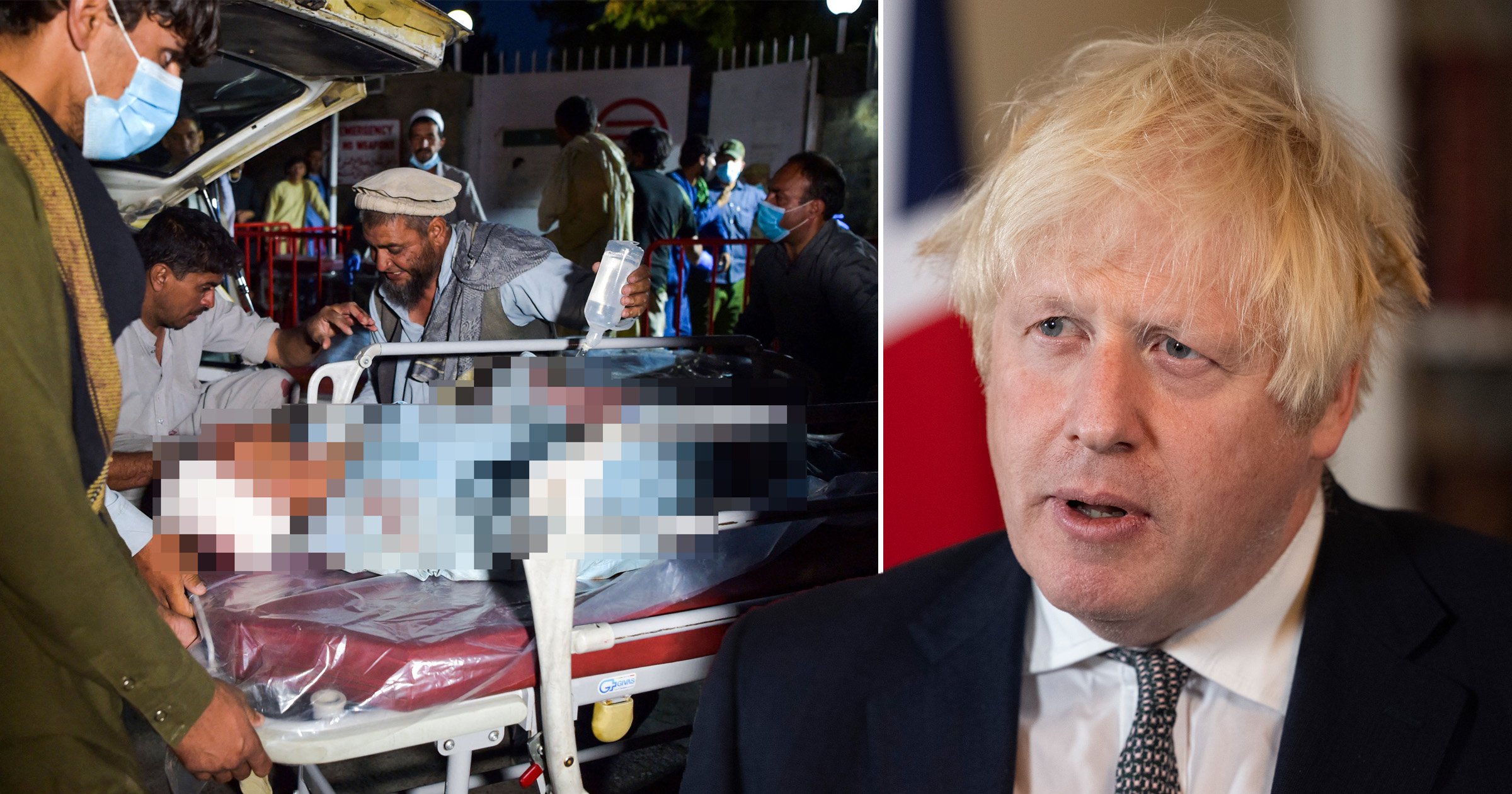 The prime minister has vowed to keep on evacuating people from Afghanistan despite deadly terror attacks today which have left at least 72 people dead.

Boris Johnson described the twin explosions at Kabul airport as ‘barbaric’ but said ‘we are going to keep going until the last moment’.

The group Isis-K, an affiliate of Isis based in the country, has claimed responsibility for at least one of the suicide attacks today which targeted American troops, of which 12 were killed.

Dozens of Afghans gathered atHamid Karzai International Airport also died as they tried to get inside to board evacuation flights out of the country.

Hundreds of people have been waiting in crowds trying to demonstrate paperwork showing they are eligible for a spot on a plane out, for example those who worked with US and British forces as interpreters.

Mr Johnson said this evening that the ‘overwhelming majority’ of eligible people have already been helped to flee the Taliban by the RAF and he would not cut short the operation due to the attacks.

American forces have agreed a deadline with the Taliban of August 31 to have left the country.

Speaking this evening, US President Joe Biden also said the the evacuation mission would not be deterred by the terror attack.

‘America will not be intimidated,’ he told reporters.

The president recognised that ‘there are individual groups of individuals — from women’s groups, NGOs and others — who have expressly indicated they want to get out’.

He warned that the attackers should expect retaliation, saying: ‘We’re outraged as well as heartbroken.

‘We will hunt you down and make you pay.’

But he added: ‘I have never been of the view that we should be sacrificing American lives to try to establish a democratic government in Afghanistan, a country that has never once in its entire history been a united country.’

The president’s last words in his news conference were: ‘Ladies and gentlemen, it was time to end a 20-year war’.

The Ministry of Defence said there have been no reported UK military or UK Government casualties.

After chairing an emergency Cobra meeting on Thursday, Mr Johnson said: ‘I can confirm that there’s been a barbaric terrorist attack, what looks like a series of attacks, in Kabul, on the airport, on the crowds at the airport, in which members of the US military, very sadly have lost their lives and many Afghan casualties as well.’

The Prime Minister told reporters in Downing Street that the evacuation programme would work ‘flat out’ according to ‘the timetable we’ve got’.

‘That’s what we’re going to do because the overwhelming majority of those who are eligible have now been extracted from Afghanistan,’ he added.

Marine Corps General Kenneth McKenzie, commander of US Central Command, told a news conference that IS gunmen had attacked civilians and that further attacks were likely.

The general said his ‘working assumption’ is that a suicide bomber approached US service personnel near the Abbey Gate of the airport, where there was then an explosion followed by gunfire directed at US military personnel and civilians.

He said another bomb went off in the vicinity of the Baron Hotel, where the UK has been processing Britons and Afghans eligible for evacuation after the Taliban seized control of the nation.

Gen McKenzie said: ‘The threat from Isis is extremely real’.

He said the US will continue its evacuation mission and that he does not expect any further US troops will be flown in to assist.

Taliban spokesman Zabihullah Mujahid said his group ‘strongly condemns’ the attack and alleged it happened in an area under US control.

Mr Johnson had previously vowed ‘we’ll do everything we can to get everybody else’ before the deadline for British troops to depart, after President Joe Biden refused his request to extend the time frame.

But the PM conceded that although the ‘lion’s share’ of eligible Afghans have been removed from the country, ‘there will be people who still need help’.

The US is providing security at Kabul airport, meaning other allied forces are expected to have to wind down their evacuation efforts and depart before the Americans do.

Eight RAF flights managed to lift 1,988 people from Kabul within the past 24 hours, taking the total since the Taliban began its march to power to 12,279.

Vincent Lambert, Frenchman at Center of Right-to-Die Case, Dies at 42