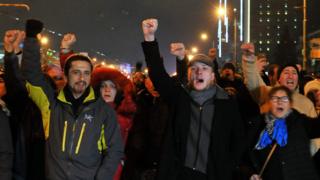 The father of a young man who died in mysterious circumstances in northern Bosnia has been released without charge after he was arrested for causing a disturbance at a protest on Tuesday.

David Dragicevic, 21, was found dead last March in the city of Banja Luka. His family say police are concealing the truth about his murder.

David’s father Davor was arrested at the latest in a series of protests.

The rallies have become a focus for anger against the government.

Davor Dragicevic, 49, was questioned by Bosnian-Serb prosecutors on Wednesday morning but was later released.

Speaking outside the prosecutors’ office, he called for fresh protests on Wednesday night.

What happened to David Dragicevic?

The body of David Dragicevic, a technology student, was found in a creek in March 2018. His family say he was abducted, tortured and murdered.

They blame the authorities for his death – accusations officials deny. Police say drugs and alcohol were found in his system and that he drowned.

A prosecutor ruled that David was murdered. However, an official investigation ended without anyone being charged.

How big are the protests?

The protests have been taking place daily in Banja Luka since March, under the slogan “Prava za Davida” (Justice for David).

Mr Dragicevic was arrested on Tuesday for what police described as “security reasons” – they said he had ignored an earlier summons. His ex-wife, David’s mother, and an opposition politician were also detained.

Police then cleared a makeshift memorial to David, where protesters had laid flowers and lit candles.

What is the political background?

The protests have become a rallying point for people disaffected with the stagnant local economy and what the opposition calls the growing authoritarianism of Milorad Dodik, the Serb representative on the Bosnian three-member presidency.

Mr Dodik, a nationalist, was for many years the prime minister of the Serbian part of Bosnia, Republika Srpska – one of the two political entities created by the peace agreement that ended the Bosnian war in 1995.

In October, he was elected to the Bosnian state presidency, where he serves alongside representatives of the two other main ethnicities, the Croats and Bosniaks (also known as Bosnian Muslims).

The European Union office in Bosnia said any further protests should continue to be peaceful and the Republika Srpska authorities must show restraint.