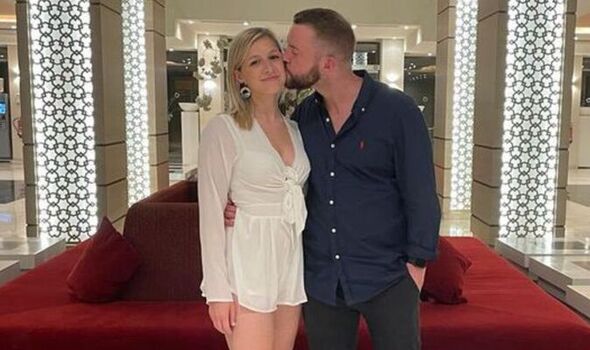 The boyfriend of a woman who died from cancer is looking to grant her final wish – to build an accessible playground where disabled children can play with their friends.

The couple, from London, received a call from the doctors while celebrating a friend’s wedding in Italy in August this year.

They had been planning to end their trip early anyway, as Alex was feeling ill, but hoped to return at a later date.

She had been suffering from stomach problems for a while, but had assumed they were a side effect of coming off the pill or possibly a cyst that could be treated within a few months.

After the call, Alex burst into tears, while Aidan says the reality did not hit him until two days later.

Aidan, 29, told The Mirror: “I don’t know whether it was a panic attack or what, but I was just hysterically, hysterically crying. I couldn’t stop.

“[It was] just the realisation of what was happening [and it] setting in.”

For Aidan, the next couple of months were a “bit of a blur”, with Alex going in and out of the hospital, before she was checked in as an inpatient five weeks before she died.

Her devoted mum would spend every day by her side, with Aidan taking over in the evenings after work.

During this time, he was struck by Alex’s strength and recalls fondly how the hospital staff “loved her so much”.

Alex was working in the NHS as an occupational therapist in a school for children with physical disabilities and additional sensory needs, meaning she understood everything that was happening much better than Aidan did.

The second month was particularly hard, with doctors trying various treatments to no avail.

Through it all, Alex remained remarkably strong, “taking it on the chin” right up until they were told she most likely had just one week left to live.

Aidan said: “We got told on Thursday that it was terminal, and I said my proper last goodbyes then.

“I sat in the room with her and played the song that we always joked would be our first dance at our wedding.”

That same day, Aidan and Alex discussed a project that had long been her dream: an accessible playground where children with disabilities could play with their friends and siblings, and he promised to make it a reality—with a fundraiser already underway here.

The following Saturday morning, Aidan tested positive for coronavirus meaning he could not return to the hospital to see Alex, only able to contact each other by phone.

Aidan said: “I was at home isolating, and I got a call from her. She wasn’t really making that much sense.

“She said a few things that were probably just the morphine talking, and she told me ‘I miss you’, which was really nice.

“I texted her mum and said, ‘Alex has come to, do you want to go and check on her?’

“Alex’s mum said, ‘She’s not been conversational since pretty much Saturday’. The fact that she managed to get a phone, type my number in, and call me, I thought that was lovely.”

A couple of days after the unexpected phone call, Alex passed away.

Looking back at the time, Aidan finds it unbelievable that just two months before, they had been in Italy on holiday, where she had been “the life and soul of the party”.

One of Aidan’s favourite memories of Alex is how she behaved with his young godson, who sadly lost his father back in 2020.

Her kind nature “would shine through”, and she would “go above and beyond” to be there for them, even during the early months of their relationship.

Caring for others was Alex’s vocation, and she loved the children she worked with.

Aidan continued: “You will genuinely never meet anybody who enjoys their work as much.

“She’d come home every night with a big beaming smile on her face, showing me pictures of pyjama day with the kids, or something funny that one of the kids had said.

“She’d found her calling as an occupational therapist, and working with these kids particularly.”

Now Aidan is seeking to continue Alex’s legacy by making her dreams of an accessible playground come true.

Reflecting on what it would mean to him to create this playground, Aidan said: “Alex passed away at 27, but she had such a positive impact on people’s lives, particularly these children but also anyone who ever came into contact with her.

“Friends, family, whoever that might be, would have experienced the Alex I’m describing to you.

“That caring, loving, selfless person. I see this as a way that could prolong the legacy that she was already building.”

Aidan knows he “waxes lyrical” about Alex, but knows “she deserves it”, adding: “Her entire outlook on life was ‘how can I help people?’ The world would be a better place if there were more Alex Halleys.”

You can donate to Aidan’s fundraiser here.