Guy Verhofstadt, the EU Parliament’s Brexit coordinator, has admitted that Britain’s historic vote to leave the EU in 2016 is a “failure of EU”. The former Belgian Prime Minister also admitted that when a country of Britain’s stature votes to leave, it shows there is “something wrong” with the bloc. Speaking on ‘Brexit – The Clock is Ticking’, he said: “After a referendum like this, we can’t say ‘everything is fantastic, the EU is a success’.

“Some keep saying this. For me, it is a failure for the EU.

“If an important state leaves, then something is wrong.”

Earlier this week, Mr Verhofstadt warned about the consequences to other EU states if Britain takes part in the European elections.

He told the European Parliament: “I fear most it will import the Brexit mess into the European Union and moreover it will poison the upcoming European elections. 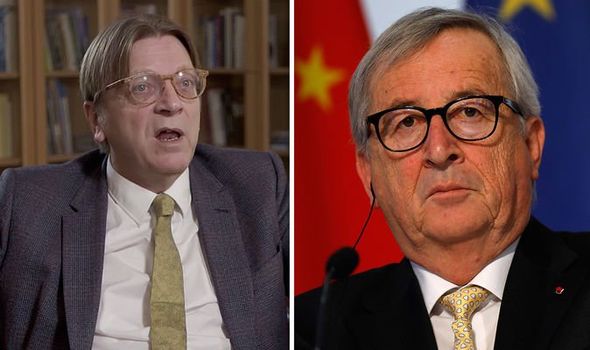 If an important state leaves, then something is wrong

“The Conservatives and Labour will do what they have already done and that is run down the clock.

“The proof of this was that the first thing that after last week’s decision was to go on holidays.

“I never thought I would I say this in this parliament but maybe the only thing that can save us is Nigel Farage. As you will hear today he is already campaigning.”

Last week the European Union agreed to delay Britain’s departure from the bloc until the end of October after Mrs May wrote to EU Council President Donald Tusk asking to extend Article 50.

The Prime Minister is expected to try to bring her Brexit agreement back to the House of Commons before the end of May to try to avoid the UK taking part in European elections.

Mr Tusk insisted that if British MEPs are elected in May they must be treated as “full members”, as he hinted that the UK could delay Brexit beyond the October deadline.

Addressing the European Parliament in Strasbourg, Mr Tusk said: “One of the consequences of our decision is that the UK will hold European elections next month.

“We should approach this seriously as UK members of the European Parliament will be there for several months – maybe longer.

“They will be full members of the Parliament with all the rights and obligations. I am speaking about this today because I have strongly opposed the idea that during this further extension the UK should be treated as a second category member state. No, it cannot. Therefore I also ask you to reject similar ideas if they were to be voiced in this House.”

‘Step aside!’ Queen faces growing calls to abdicate and ‘make way’ for new royal to lead

Why Queen will never abdicate despite health scare ‘Bad word’