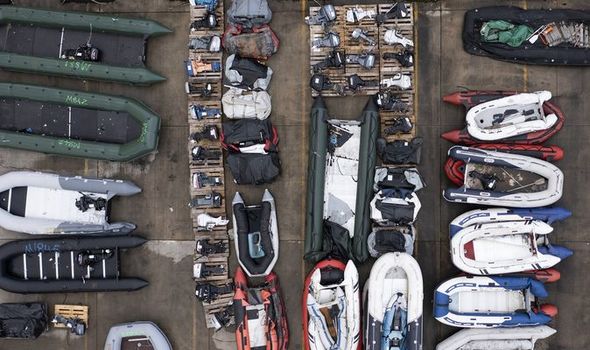 Writing exclusively for the Sunday Express, the Home Office minister pledged that the new law would “break the business model” which encourages thousands of illegal migrants to make the dangerous crossing over the English Channel from France in small boats. He also said the use of new “one-stop-process” will ensure that asylum and human rights claims are heard together and speed up the process of deportations of dangerous foreign criminals and others who have no right to be in the country.

The Bill will also bring in measures to make travel visas to the UK more expensive for countries which refuse to take back illegal migrants. He said: “As Sunday Express readers know, [the asylum system] is in much need of repair; overwhelmed and abused by those who do not play by the rules of this country. Stopping illegal migration is not a choice, it’s a moral imperative.”

It comes as polling for the Sunday Express has revealed that a majority of people believe illegal migrants in small boats on the Channel should be taken straight back to France. According to the Redfield and Wilton poll of 1,500 people 56 per cent believe that the migrants who are usually trafficked by criminal gangs and make the dangerous crossing in small boats, should be returned immediately.

Only 16 per cent opposed returning the migrants to France. The sentiment was backed by Tory MPs from the influential Common Sense group which has been campaigning for tougher border controls. Ipswich MP Tom Hunt, the groups’ deputy chairman, last week visited a Rohignya refugee camp in Bangladesh.

He said: “There is a big difference between individuals in France, a safe European country, and individuals I met [in the camp]. Most people who are anti illegal immigrants from France are compassion people who want to help people like these.”

Ashfield MP Lee Anderson, another leading Common Sense Group member, said: “If you surveyed my constituency you would get 90 per cent or more in favour of sending them straight back to France. The problem is we are a soft touch in this country. We give them free hotel accommodation when they arrive, free health care, benefits. No wonder they are so desperate to come.

“The Government needs to follow my proposal of having offshore processing centres where their applications can be dealt with before they are sent home. If we did that we would see the numbers drop quickly.”

Meanwhile, Lord Byron Davies, a Conservative peer who worked with the Metropolitan Police for more than three decades, including years spent tackling organised crime and people trafficking networks, said the key to success was ensuring that the different agencies and countries involved shared intelligence.

He suggested that the Home Office adopts a similar model to the Ministry of Defence, where people with operational experience work alongside ministers and throughout the organisation. Lord Davies would welcome the creation of a war room-style centre of operations so that intelligence about people traffickers can be easily pooled and ministers can receive clear advice from experts.

He is worried there is a lack of “operational understanding” at the Home Office. The former Gower MP is concerned that a failure to tackle people trafficking is undermining citizens’ confidence in the ability of the UK to control its borders.

He had straightforward advice for Ms Patel: “My advice is get on top of the intelligence-gathering and get on top of sharing and turning it into evidence and arrests. From everything that I see at the moment, in my experience, it’s not happening.”

The Bill also comes as new figures show that more than 250 foreign criminals have been allowed to stay in the UK in the last three years after claiming deportation back to their homeland would be a breach of their human rights.

Murderers, rapists, paedophiles and terror suspects are among the criminals who have successfully won legal battles in the past that a return to their homeland would breach their rights.

Many have used Article 8 of the Human Rights Act to claim that removing them from the UK would rip them away from family members and would breach their rights to a family life which Justice secretary Dominic Raab is attempting to reform with a new British Bill of Rights.

The statistics show from the start of 2018 to the end of 2020 there were 276 cases where foreign offenders managed to evade deportation by claiming rights under Article 8. The overall number of foreign offenders being ejected from the UK has fallen 27percent in the last year from 3,827 in 2020 to 2,809 last year.

Prince Charles’ realisation over change he must make when King: ‘He was called a lunatic!’