LBC host Iain Dale shot down the idea of a customs union and explained how “unacceptable” for the UK for its future trading arrangements. He noted that a customs union would give “total control” to the EU and prevent the UK from trading in its own interests. Mr Dale also criticised the logic of Labour MP’s supporting a customs union and questioned whether this would be the Parties course of action if they were in power.

He began by saying: “If we decide to stay in a customs union, Brexit is over.

“Brexit is dead, it would actually be better to stay in the EU on current membership terms than join a customs union.

“A lot of people who seem to be in favour of a customs union seem to have no clue what it involves.

“It means if we stay in the customs union but are outside of the EU, they have total control. 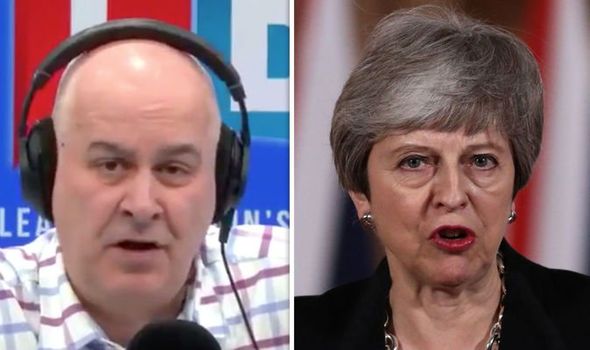 “You could have the French to support a trade deal with China which was totally against the interest of Britain and we could do nothing about it.

“You may think that that is okay, fine but I do not, Boris Johnson does not.

“I can’t really understand the logic of any Labour MP that thinks that is a good idea.

Theresa May announced yesterday after seven hours of Cabinet meetings that she would be engaging Jeremy Corbyn with talks in hopes of agreeing on an acceptable Brexit plan.

Mrs May faced immediate criticism from Brexiteer MPs who believe that the Prime Minister will allow the Labour party to influence the outcome of Brexit with fears of remaining in the single market or having a customs union.

The Prime Minister is also expected to bring her withdrawal agreement forward again to Members of Parliament before April 12, the new Brexit leave date.

President Trump on his way to UK for state visit

Woman charged with murder of Norfolk grandmother who ‘fell down stairs’