Within hours of the EU Withdrawal Agreement Bill being given Royal Assent in Westminster, the EU Parliament’s constitutional affairs committee gave their own recommendation for the divorce deal. MEPs voted 23 to three to approve the text agreed between Mr Johnson and Brussels. In the first sign that Nigel Farage is prepared to throw his support behind the Prime Minister, the Brexit Party’s Rupert Lowe backed the deal.

Antonio Tajani, the committee’s chairman, heralded the UK’s departure as a “historical albeit a sombre moment” for the bloc and urged his colleagues not to celebrate.

Guy Verhofstadt, the EU Parliament’s outgoing Brexit co-ordinator, added the backing for the agreement is not a show of support for the result of the 2016 referendum.

“It’s the choice between a Brexit in an orderly way or avoiding a no deal or a hard Brexit,” he said. 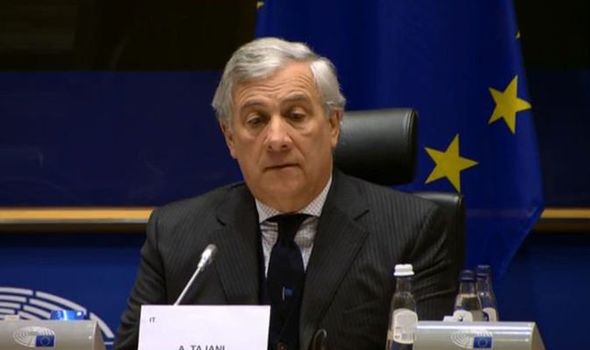