Brexit: UK 'wanted to be in charge' says Widdecombe

Irish taoiseach (prime minister) Michael Martin said this could remove “up to 80 percent of checks”, on good travelling between Northern Ireland and Great Britain. However, this would mean the UK agreeing to align with EU rules in a number of areas, significantly boosting Brussels’ influence.

The arrangement, called a Sanitary and Phytosanitary Agreement (SPS), would tie Britain to certain EU rules.

President Biden has insisted this won’t stop the UK signing a new trade agreement with the US.

Speaking to Sky News Mr Martin said: “I believe the US administration’s comments are interesting in so far as they deal with a significant issue that would concern the British government, i.e. the capacity to do a trade deal with the United States whilst also having an SPS arrangement between the European Union and the United Kingdom.

“In my view, there’s a legitimate issue there for the United Kingdom Government, but in our view, an SPS agreement would deal with up to 80% of all of these issues and I think it’s a prize worth certainly exploring in the fullest manner possible.”

Under the terms of Boris Johnson’s Brexit agreement checks now take place on many goods passing between Northern Ireland and other parts of the UK. 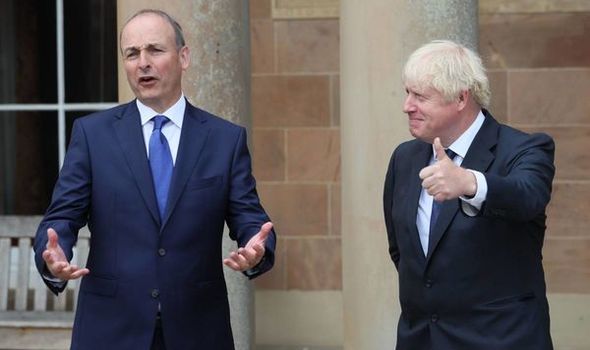 However, this has infuriated unionists, who argue it undermines British sovereignty.

More checks are due to be added at the end of this month unless the UK unilaterally delays them.

These will include new restrictions on fresh meat, which have sparked concerns over whether British sausages would be able to enter Northern Ireland.

Mr Martin said it would be “very problematic” if the UK decides to delay imposing this.

Loyalists have been protesting against the Northern Ireland protocol across the province.

Mr Johnson has argued the deal can only work if the EU takes a more flexible approach to enforcement.

[SCROLL DOWN FOR REGULAR UPDATES]

Pounds, inches and pints set for comeback in Brexit freedom overhaul [REVEAL]
‘Get it into your heads!’ Boris rages at EU after Brexit talks [SHOCK]
Macron claimed ‘too much English’ spoken in EU [INSIGHT] 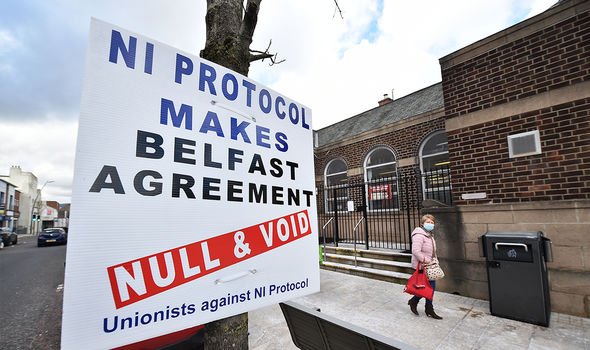 Boris Johnson could retaliate against Brexit threats from the EU as soon as Joe Biden leaves the UK following the G7 summit, EU insiders fear according to one expert, but has been warned it could destroy hopes of a US trade deal.

Tensions between London and Brussels soared after talks between the UK Brexit minister Lord Frost and European Commission vice president Maros Sefcovic on Wednesday collapsed over a solution to the implementation of the Northern Ireland Protocol.

The European Union has threatened to launch a trade war against Britain if it does not implement checks on goods entering Northern Ireland under the terms of the Brexit deal, with Mr Sefcovic warning patience with the UK is wearing “very, very thin”.

Eurocrats are set to fork out millions to arm its controversial paramilitary border force, it can be revealed.

Officials are looking to equip Frontex’s “Standing Corps” with 2,500 semi-automatic pistols and more than three million rounds of ammunition to patrol the bloc’s external frontiers.

The new troops could even be deployed in the English Channel to help tackle people smuggling between the UK and France.

But critics have branded the move a “menacing development” in the shift towards a full-blown EU superstate.

Dame Vera Lynn: Heroine who put others first right to end of her life