Mr Stedman-Bryce invited Ms Sturgeon to hold the public debate during an interview with Express.co.uk.

“I would love to get her in a room and talk to her about why she’s misleading the people of Scotland,” he told this publication.

“What she is promising, she cannot deliver. It’s absolutely impossible and she knows it.

“She is rallying everyone in Scotland with the whole independence issue again, purely for political gain and to galvanise support for her party while they go into these elections. 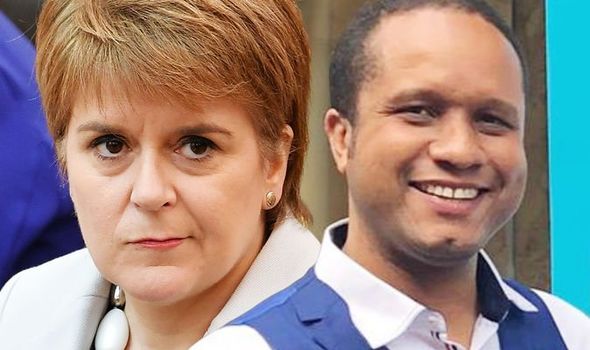 “Over her history, she has avoided debates. It is the chink in her armour and if we can expose this weakness for what it is.”

Mr Stedman-Bryce argued that the SNP is seeking to reclaim power from Westminster and simply hand it straight to eurocrats in Brussels.

The Brexit Party candidate maintained Ms Sturgeon would suffer a similar fate as Theresa May at the Brussels negotiating table.

He said: “Theresa May has basically taken a beating, are we expected to believe Nicola Sturgeon is going to march into Brussels and demand opt-outs?

“It’s not going to happen.”

Scotland would also have to rejoin the EU on worse terms, including scrapping key British opt-outs on eurozone membership and commitments to an ever closer union, he added.

Like the Brexit Party’s ambitions to enter the European Parliament, House of Commons and Welsh Assembly, Mr Stedman-Bryce has set his sights on a Holyrood takeover.

He said: “How many times can you blame everyone else before you before you accept responsibility that you are not fit for the job?

“She, like the rest of them, career politicians, if I had my way… get them all out of Holyrood and get some people in there who can get the job done.”

In Scotland, the 44-year-old businessman wants to speak out for the “forgotten one million” who voted for Brexit in the country.

He also wants to breakdown the negative stigma and comparisons to Ukip surrounding the Brexit party.

As a gay, black man, Mr Stedman-Byrce is sick of Brexit voters being stereotyped as homophobic and racist.

“If you look at Ukip, there’s a lot of people that won’t vote for them because they aren’t seen as an acceptable party to go for,” he said.

“What we are seeing with the Brexit Party is a real diverse array of candidates and members to the party.

“We are sick and tried of this whole focus on us being these racist, homophobic and nasty people – it’s just not true.”

Mr Stedman-Bryce is planning to reach out to Scottish Brexit voters in the hope of offering them a new political home.

He added: “I call them the forgotten one million, they’ve been left behind and aren’t represented. There isn’t a viable party in Scotland that speaks for these people.

“When you look at the 1.6 million people who voted to remain versus the one million who voted to leave, that’s a huge amount given the population of Scotland.

“In 2017, the SNP received 977,000 votes in the general election and returned 35 MPs into Westminster with that figure.

“With them trying to diminish and undermine the importance of the Brexit vote, they don’t even mention their own mandate – the Scottish people – because more people voted to leave the EU than voted for the government in power in Scotland.”

Man dies and two others pulled from water after boat sinks

UK: Boy, 13, dies of coronavirus 'without any family close by'

Man in life-threatening condition and two critically hurt in Leicester