Nigel Farage criticised BBC presenter Andrew Marr during a speech on Friday evening. Mr Farage claimed he had been “led to believe” by the BBC there was not a “single Brexiteer in Scotland”. The Brexit Party leader made specific mention of Mr Marr, referring to him as a “distinguished Scot”. Speaking at a Brexit Party rally in Edinburgh, Mr Farage addressed the crowd: “I hadn’t expected to see anybody here this evening. 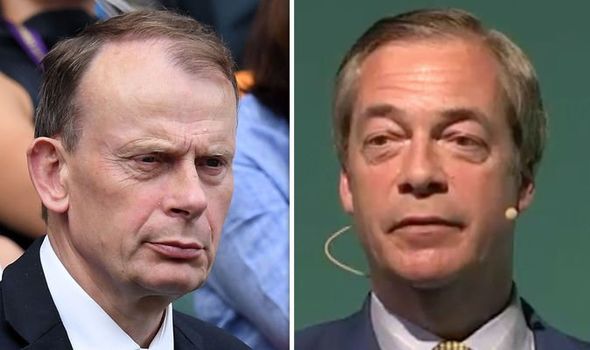 Last week the BBC was accused of “bias” after veteran journalist Mr Marr conducted an explosive interview with Mr Farage on his Sunday show.

The interview last Sunday marked the return of Mr Farage to The Andrew Marr Show after three years. Mr Farage, whose party is running for seats in the upcoming European elections, was mostly confronted about past statements rather than his current manifesto.

Speaking following the interview with Andrew Marr, Mr Farage argued “something remarkable” is going on with his newly formed party that the BBC seems “intent on ignoring”.

Writing in the Daily Telegraph, he said: “When it came to talking to me about the Brexit Party, which has at its heart a desire to scrutinise this Establishment-sponsored con, this supposedly seasoned journalist only cared about the past.

However, Rob Burley, the programme’s editor, defended the line of questioning. He said: “From the start of the Brexit Party he has said this is not just about Brexit but a party to reshape politics. We asked him whether it would adhere to his known positions on non-Brexit issues.”

The Brexit Party has seen support soar in the aftermath of Theresa May agreeing to an extension of the Brexit deadline with the European Union, with a YouGov poll of 2,212 voters conducted between May 8-9 showing 34 percent of those surveyed would cast their vote in favour of the newborn party.

Following a series of controversies and swathes of former support going to the Brexit Party, the early May YouGov poll showed Ukip currently sit on 3 percent – the lowest of the seven primary contesting parties – after achieving a mammoth 27.5 percent vote share in the 2014 European elections.

It was a mixed performance for the self-proclaimed ‘Remain’ parties – while Vince Cable’s Liberal Democrats notched another point in the polls, the Green Party went down one to 10 percent.

Meanwhile, Change UK – which formed in February out of defectors from the Labour and Conservative Party – remain on 5 percent.

Rescuers call off search for missing migrant woman in Channel